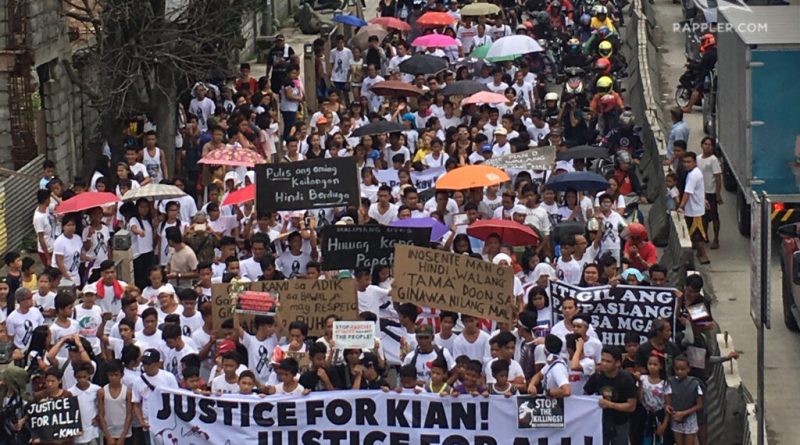 The Communist Party of the Philippines (CPP) joins the Filipino people in marking today the second anniversary of the killing of 17-year old Kian delos Santos by police during “anti-drug” operations in Caloocan. We remember as well the murder of 19-year old Carl Arnaiz and 14-year old Reynaldo de Guzman who were killed around the same time by police.
Kian, Carl and Reynaldo are among the more than one hundred children and minors killed under the Duterte regime’s “drug war.” The most recent victim is three-year old Myka Ulpina who was killed with her father last June 29 in Rizal.

We remember all these children and express sympathy with all grieving mothers and fathers. We denounce the hypocrisy of Duterte’s minion Sen. Bato dela Rosa, then police chief who led the “drug war,” who vulgarly remarked “shit happens” after Myka’s killing, but who now pontificates with his narrative of “activism destorying families.”

The Filipino people holds Duterte and all his military and police officers accountable for the deaths of all these children and all victims of the “drug war.” In the past three years, close to 6,600 were officially killed by the police, while close to 30,000 murders, carried out by police and police vigilantes, remain under investigation.

They are all victims of extrajudicial killings under Duterte’s fake “war against drugs” – a war, not to eliminate illegal drugs, but to control the drug market and corner the hundreds of billions of pesos in shabu money. It is a war against the poor meant to sow fear and establish his tyrannical rule. With fascist impunity, Duterte unleashed an all-out campaign of killings with outright disregard to rights and due processes.

The Party urges the Filipino people and all victims of Duterte’s drug war and all other wars to fight back. We urge all mothers of the murdered, the orphans, and all families and friends of the several tens of thousands killed to make their voices be heard. Come together to end the silence: Justice for Kian and for all the thousands murdered! End Duterte’s killings! End Duterte’s fascist tyranny!