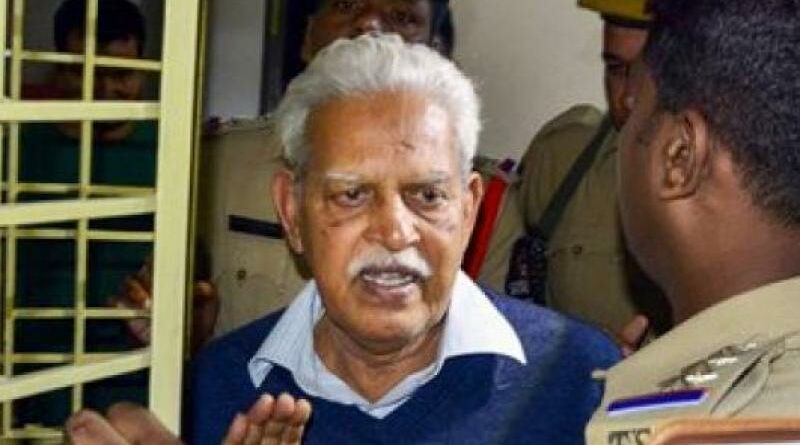 Mumbai, November 29, 2021: Telugu poet and political prisoner Varavara Rao, an accused in the Bhima Koregaon case, need not surrender to the Taloja Jail authorities until December 6, the Bombay High Court said on Monday.

Varavara Rao is suspected to have early stage of Parkinson’s disease.

A medical test was conducted on September 9 and the report submitted to the Bombay High Court on Monday. It stated that Mr. Rao is suspected to have early stage Parkinson’s along with other medical ailments.

He was granted interim medical bail for six months on February 22, 2021 and has filed for an extension of the same in court. He is currently residing in Mumbai and has urged the court to allow him to go back home to Telangana.

On Monday, a division bench of Justices Nitin Jamdar and S.V. Kotwal directed the National Investigation Agency to conduct fresh medical tests and submit the reports which do not have medical jargon.

The bench gave the central agency time till December 3 to submit the report and extended Mr. Rao’s date of surrender till December 6.

The fresh medical plea filed by Mr Rao’s lawyers mentions an opinion by a neurologist of a well known private hospital that states, “He has asymptomatic Parkinson’s ailment”.

He has been suffering from constant headaches, known as cluster headaches and needs further examinations and constant supervision. He has retention problems, movement disorders with tremors and gait instability.

On November 18, 2020, the Maharashtra government had agreed to shift Mr. Rao from Taloja Central jail hospital for 15 days for medical examination and treatment to a private hospital.

Mr Rao was arrested on August 28, 2018 along with Sudha Bharadwaj, Vernon Gonsalves and Arun Ferreira.