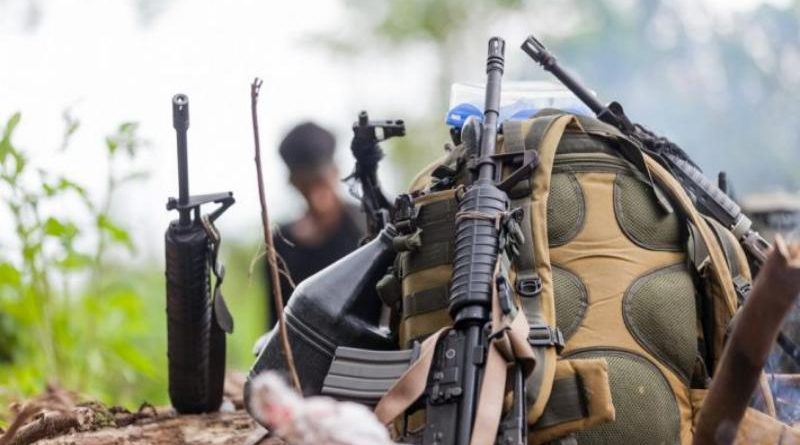 Red fighters under the ComVal-Davao Gulf Sub-Regional Command battled AFP troops in two separate engagements in Mabini and Maco towns in Compostela Valley, which resulted in heavy enemy casualty and thus dispensed revolutionary justice against the fascists whose hands are bloodied with the recent murder of two civilians and other serious abuses against the masses in the province.

On April 3, at around 6:45am, Red fighters engaged troops of the 71st IB in Sitio Bagong Silang, Brgy. Teresa in Maco town, where 4 fascist soldiers were confirmed killed and several others, including the Alpha Coy commander 1Lt. Serwin E. Matas, were severely wounded. Earlier, on March 30, three soldiers of the 66th IB were likewise killed in battle at around 9:30am in Sitio Dasuran, Brgy. Golden Valley in Mabini town. Contrary to fake news by the AFP, there was no casualty on the side of the NPA.

Last week, troops of the 71st IB murdered Franklin and Zaldy Tirol, both civilian farmers, in the early hours of March 28 in Sitio Mangurayan, Brgy. Anitapan, Mabini and tried desperately to falsely misrepresent the two as members of the NPA killed in an armed encounter.

In the aftermath of the March 30 and April 3 engagements, the fascist enemy launched heavy artillery from 105 howitzer canon several times, indiscriminately rained rocket fire using MG520 attack helicopters and airlifted their casualties from the encounter site. For several days, the AFP continued to use helicopters to forward-deploy troops, send out supplies and conduct aerial reconnaissance.

Already lacking support from the masses in the area, the enemy was lured deep into the guerilla base where they became vulnerable to offensives by the NPA. Furthermore, the AFP’s consequent heavy use of modern military equipment and materiel—at the expense of taxpayers’ money—is merely to conceal their failure to court the support of the masses who continue to suffer abuses in their counter-revolutionary war.

These latest engagements, which delivered heavy blows against enemy troops, scoff at the AFP’s gimmicks such as persona non-grata proclamations supposedly issued by local government units against the NPA. The fact that Red fighters are able to maneuver in their areas of operation and engage the enemy at their initiative prove that they thoroughly enjoy the support of the masses, unlike the AFP troops who are hated by the masses and thus wade blind and deaf into the revolutionary movement’s base areas.

Aside from their long list of crimes and abuses, the 71st IB and 66th IB are also being employed as investment defense force, aka highly paid guard dogs, of banana plantations and other capitalist ventures that displace farmers and Lumad and destroy the environment, such as the Apex Mining Company. This is the reason why the masses are rejoicing this appropriate meting out of revolutionary justice against two of the most rabid AFP troops in the region.

Duterte’s recent threat to declare a “revolutionary war” is mere bluster, a hollow intimidation being supported only by his fascist minions in the AFP and the PNP. At the very least, it is misnomer for an already existing bloody war for the benefit of the semi-feudal and semi-colonial reactionary system and one that the Filipino masses continue to bravely engage through the people’s war.