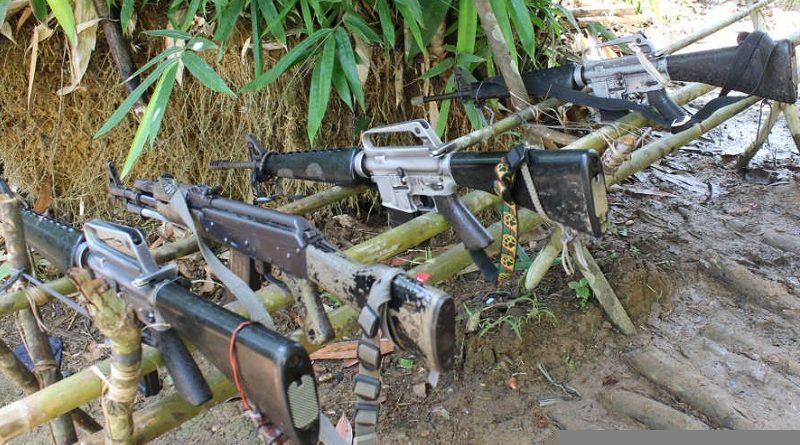 As the AFP intensified its war crimes to “flatten the hills” and “drop bombs,” in close proximity to Lumad and peasant communities in Southern Mindanao, New People’s Army units launched tactical offensives against forward-deployed AFP troops, carried out punitive action on an abusive multinational banana exporter, and released prisoners of war.

On March 23, at around 12 noon, a company of Red fighters from Comval–Davao East Coast Sub-Regional Command ambushed a unit of the 66th IB and seized one M4 assault rifle, one Harris radio and several military backpacks. Five enemy troops were killed.

The 66IB was punished for its indiscriminate aerial bombardment on March 22 that resulted in the destruction of farms and livelihood and the evacuation of hundreds of Mandaya and peasants. After the successful NPA ambush on March 23, the fascist enemy proceeded to launch aerial strike with MG20 attack helicopters and dropped at least four bombs near civilian-populated areas.

Earlier in the day of March 23 at around 9:25 in the morning, Red fighters ambushed members of the 60th Infantry Battalion in Brgy. Cayaga, San Fernando, Bukidnon. Two enemy troops were killed while two were severely wounded. By 1:00 in the afternoon, NPA units from ComVal–North Davao–South Agusan Sub-Regional Command effectively deflected the attack mounted by troops of the 72IB killing one CAFGU member in Laak, Compostela Valley. A Red fighter was martyred in the engagement. No firearm of the NPA was lost during the firefight as the enemy falsely reported.

On March 24, the ComVal–Davao Gulf Sub-Regional Command safely released its prisoners of war CAFGU members Rene C. Doller and Carl Mark L. Nucos to their families and peace advocates in Brgy. Don Salvador, Mati City. The release was carried out as goodwill for the continuation of the peace negotiations between the NDFP and GRP.

On March 25, Red fighters gutted three container vans of the abusive DOLE-Stanfilco in Brgy. Cambagang, Maragusan. The action shows the revolutionary movement’s support for workers’ struggle for job security and protection against capitalist exploitation. More than 500 workers were illegally terminated by the company and its cohort labor-only contractor without payment for length of service.

As the NPA in the region welcomes the positive development in the peace negotiations, Red fighters will remain vigilant in active defence against bullheaded combat and civic military operations of the AFP. A possible ceasefire declaration shall not be allowed to enfeeble the people’s army in carrying out its duties to protect the People’s Democratic Government and in defending the masses against the AFP’s fascist and pacification campaign in the course of the negotiation.