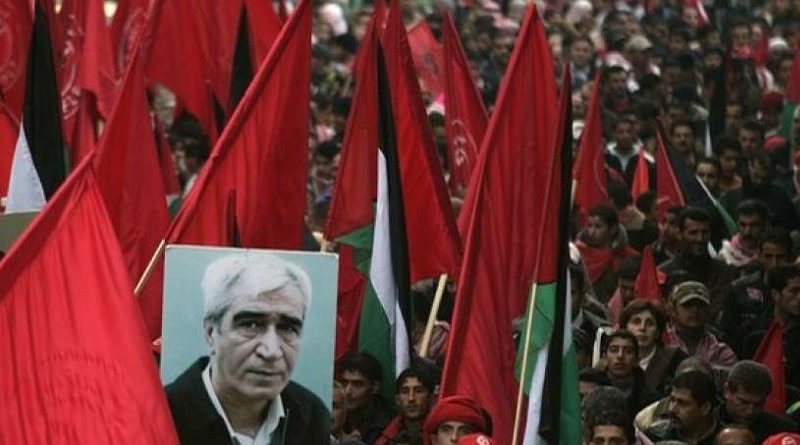 The General Central Committee of the Popular Front for the Liberation of Palestine concluded its regular meeting, named in honor of the two martyrs, Omar Nayef Zayed and Ferial Nasrallah. The session evaluated the overall current developments on the Palestinian, Arab, regional and international levels, discussing at length and in depth the various matters on its agenda. The meeting coincided with the heroic confrontation waged by the revolutionary intellectual martyr, Basil al-Araj, against the fores of the Zionist enemy. His struggle stood as a confirmation that the flame of the uprising burns and will remain constant, bringing forth yet more revolutionaries to continue the path of the martyrs and the revolutionaries who have filled the ranks of the Palestinian national liberation struggle since the first confrontation of the Zionist invasion of Palestine.

The Central Committee meeting also coincided with the 49th anniversary of the battle of Karameh, in which the will of the Palestinian guerrilla and the Jordanian Arab soldier in confronting the Zionist military with the strongest, most sophisticated weapons confirmed the possibility of achieving victory over this enemy as a realistic possibility when analyzing the available conditions with objectivity.

On this occasion, the General Central Committee of the Popular Front for the Liberation of Palestine greets with pride and deep regard the continuing sacrifices of the Palestinian people, the heroic martyrs and the suffering of the prisoners in the prisons of the enemy. It directs its greetings to their families and loved ones, emphasizing the commitment and loyalty to their path, to achieve the goals of our people of national liberation, return and self-determination.

As we stand before today’s political and social developments and look at the variables and rapid shifts happening today, they confirm once more that the objective of the Zionist project in Palestine and throughout the region is control and domination by through fragmentation, plundering of resources, undermining of progress, perpetuation of backwardness, expansion and colonization, apartheid, ethnic cleansing and denial of our people’s rights to freedom and self-determination. This includes the imposition of the so-called “Jewish state” on Palestinian land. All of the above comes in the framework of the strategic alliance with US imperialism and its role in the region. The Zionist-US alliance makes the most of the continuing Arab and Palestinian conflict, division and fragmentation, and its agents are dedicated to furthering that fragmentation to keep the Arab and Palestinian people in their weakest stage while confronting many risks and major challenges. It seeks to liquidate the Palestinian cause by offering “solutions” that undermine Palestinian national rights, placed in the context of regional proposals for the situation flaring on multiple fronts, providing the Zionist occupation a greater opportunity to enforce normalization with Arab regimes, prioritizing the so-called communal and sectarian conflicts over the central Palestinian cause. This puts before us great responsibilities to act, including the following points:

There is an urgent need to break firmly and sharply with the Oslo approach on political, economic, cultural and security levels in concept and in their implementations on the ground, and this requires ending, once and for all, the utterly-failed bets on begging for the rights and national goals of the Palestinian people through the path of futile negotiations, and abandoning the illusion of the United States playing any honest role. The US administration has even confirmed that the so-called “two state solution” is not the only solution for it, abandoning the solution that the monopolistic leadership of the Palestine Liberation Organization has tied its strategy. The administration announced its unequivocal financial and military support for the policies and procedures of the occupation, including its settlements, annexation of most of the West Bank and Jerusalem, and support to ensure the strategic superiority of the Zionist occupation to preserve its “security” and stability. Thus, the continuation and persistence of this illusionary reliance on the part of the monopolistic Palestinian “leadership” will only escalate the danger to Palestinian rights and the Palestinian cause. This comes amid the ongoing plans and visions aiming at the liquidation of the Palestinian cause. Any engagement with ideas and projects dealing with “federalism” of the West Bank and Gaza or a “Gaza/Sinai state project” is the same disastrous approach with devastating results.

It is important to continue national efforts to end division and build national unity. This requires commitment to all national agreements that have been developed, especially the national reconciliation document, the Cairo agreements, and the output of the preparatory of the Palestinian National Council in the meetings on January 10-11 2017 in Beirut, and hard work to follow up for their implementation. This is necessary to create the atmosphere for the convening of a unifying Palestinian National Council outside occupied Palestine, ensuring the participation of all national forces, on the basis of elections in accordance with the principle of proportional representation wherever possible. This also requires a comprehensive national review to establish and develop agreement upon a unified national strategy to mobilize the energies of the Palestinian people and unite their efforts and abilities in the confrontation with the primary enemy. Therefore, we in the Popular Front for the Liberation of Palestine affirm our rejection of all of the formulas and actions that enshrine and deepen the division, including the committee set up by Hamas recently for the management of the Gaza Strop. The most effective actions are taken on the basis of commitment to what has been agreed upon nationally.

The Central Committee emphasizes the firm position of the Popular Front on the Palestine Liberation Organization, emphasizing the need to thoroughly rebuild its institutions, rehabilitate its Charter and national program and rebuild its role and functions on the national level and on the level of struggle. This also includes ensuring the proper representation of all Palestinians and ending the state of exclusivity and domination, and expanding popular participation in accordance with the specificities of the Palestinian people in occupied Palestine and everywhere in exile and diaspora. This means mobilizing popular energies to confront the Zionist project and the liquidationist assault on Palestinian existence. Our position derives from our view of the PLO’s history, present and future, which represents a great national achievement, and thus we warn against attempts backed by some regional powers that may be read as attempts to create alternatives yet only reflect the state of Palestinian fragmentation.

We support the continuation of mass action to defend the rights and freedoms of our people, to life, decent work and electricity and demand an end to suppression, political arrests and the tracking down of resistance fighters with intimidation and repression by the Palestinian Authority. We express our severe condemnation at the PA security agencies that violently suppressed the march against the trial of the martyr Basil al-Araj and his comrades detained by the Zionist occupation and the attack on his father. In confirming the position of the PFLP, united with our people and with the family of the martyr Basil, and rejecting the approach of the Authority and its repressive practices, we announced our position of refusing to participate in local elections in the West Bank in May. We emphasize the need for these elections to be held simultaneously in the West Bank and Gaza and call on fateh and Hamas to help create a healthy atmosphere for renewal of local municipality bodies as is a duty to the Palestinian nation and people.

There is an urgent necessity to mobilize the Palestinian masses and completely reformulate the relationship with the masses with respect to their primary national role in the nature of the confrontation and the universal conflict with the Zionist enemy. It is essential that this confrontation has a socially inclusive character and defends every threatened piece of land from confiscation and settlement and each well of water and every aspect of heritage, on all levels of struggle.

It is also critical to defend the refugees, the camps and the right to return to the lands and properties from which they were expelled, and to protect the communities and camps of our people from destruction and renewed displacement after displacement. It is also necessary to confront all attempts to reduce UNRWA services to refugees or abolish them, in an attempt to abolish the UN’s legal and humanitarian responsibility to the Palestinian refugees, which could indicate an attempt to write off UN Resolution 194.

The Central Committee of the Front also confirmed its categorical rejection of all international and Arab projects and “solutions” that attempt to undermine the rights of Palestinian refugees and principally, their right to return, in the interest of proposals consistent with the Zionist vision of this fundamental issue.

We also underline the importance of supporting the struggle of Palestinian prisoners in their national struggle inside the prisons of the Zionist enemy, on all fields and forms, and in popular, political and human rights forums, with the assurance that all methods of resistance are legitimate to work for their release and achieve their freedom.

We will continue to work to unify democratic forces in the Palestinian arena, as a necessity, in order to build unified action on the basis of national and democratic common goals.

It is critical to promote and build the political, economic, cultural and academic boycott (BDS) of the Zionist occupation, including opening the doors to wider participation in the programs and activities of the boycott movement, and confronting normalization with the racist apartheid regime and ethnic cleansing, which was once again underlined internationally by the report of the UN ESCWA recently. The Zionist occupation and its allies pressured the UN to withdraw it; the Central Committee condemned the action of the Secretary-General of the United Nations to accede to the dictates of the United States and the Zionist occupation, reflecting once again the dominating role of imperialist powers in undermining legitimate actions of the UN and its role in maintaining international peace and security and supporting the right of self-determination of peoples. The Front also expressed its appreciation for the courageous position of Ms. Rima Khalaf, Executive Director of ESCWA, submitting her resignation in rejection of the decision to withdraw the report.

The Front will also work to strengthen relationships and alliances with Arab national and democratic forces and parties, improving the relationship with these organizations to serve the goals of the Palestinian people and the Arab nation for liberation, emancipation, progress and unity.

We aso urge the expansion of the movement and pledge to work to advocate to win international public opinion to support the justice of our cause, through strengthening our bonds with the countries, progressive forces and parties that stand for justice, liberation and the right of peoples to self-determination.

Long live the struggle of our people, on the path of liberation, return and self-determination.
Glory to the martyrs, freedom to the prisoners and victory to our people, their goals and aspirations.
The Popular Front for the Liberation of Palestine
March 2017