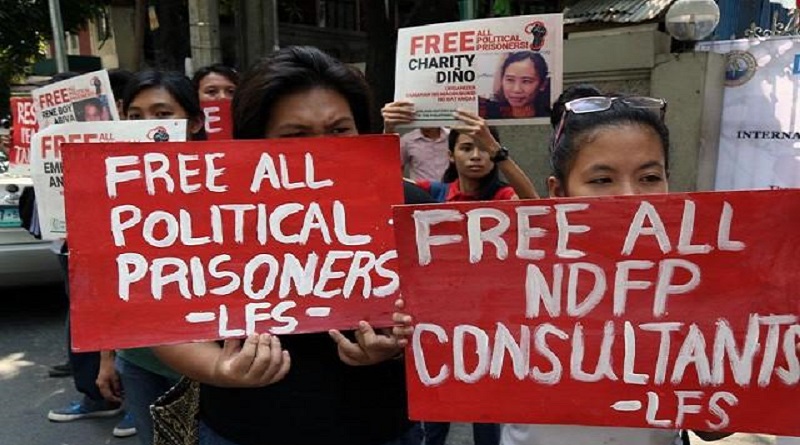 Communist Party of the Philippines
October 13, 2016

The Communist Party of the Philippines (CPP) awaits the swift positive action of GRP President Duterte to effect soon the en masse release of the remaining 434 political prisoners who long have been suffering unjust imprisonment.

The release of the remaining political prisoners will complete the process which started with the release of 19 peace consultants of the NDFP last August. It will further boost the Duterte regime’s efforts to forge an alliance with the patriotic forces which is vital to its political consolidation amid the political pro-US counter-offensive by General Ramos and his ilk of Amboys.

As an avowed Leftist, GRP President Duterte is surely sympathetic to the plight of the political prisoners who mostly are patriotic activists from the ranks of peasants, workers, indigenous peoples, students, women, urban poor, government employees and other democratic sectors. People’s organizations, especially those from which the political prisoners come from, must amplify the demand for their
release.

They were imprisoned because they stood up and struggled against the US puppet regimes of Aquino and Arroyo. Their political beliefs are congruent with the Duterte regime’s promotion of an independent foreign policy.

The release of all remaining political prisoners is primarily a question of justice. In violation of the Hernandez political offense doctrine, political prisoners are being charged with unbailable criminal offenses such as murder and illegal possession of firearms and explosives in order to prolong their
detention.

If carried out, the release of political prisoners will show the GRP’s commitment to comply with its obligations under the Comprehensive Agreement on Respect for Human Rights and International Humanitarian Law (CARHRIHL), thereby raising further the confidence of the NDFP in negotiating and forging agreements with it.

It is well within the prerogative of GRP President Duterte to declare a general amnesty to cause the immediate and unconditional release of all political prisoners in order to quickly end their suffering. He can breakdown all legal obstacles to effect their prompt release. If he does so, he would also be fulfilling the promise he made last May to the representatives of the NDFP.

As a man of honor, the GRP President Duterte is expected to carry out this democratic act over the next week or two, as agreed upon during the first round of peace talks last August 21-26.

The concurrent indefinite ceasefire declarations separately issued by the GRP and CPP-NPA last August have held over the past 50 days. However, the absence of a bilateral ceasefire agreement and the continuing hostile counter-insurgency operations of the AFP might force the hand of CPP and NPA to cut short its earlier declaration of an indefinite ceasefire in order to enable the NPA to more effectively defend itself and the people’s rights and interests.

The Filipino people would like to see the initial efforts of the Duterte regime to promote peace negotiations to gain further track by effecting the release of all remaining political prisoners before the end of the month, working with the NDFP to define the parameters of a ceasefire agreement and accelerating efforts
to forge a patriotic alliance between the ruling anti-US Duterte regime and the national democratic forces.

Amid the heightened political counter-offensive of the US imperialists and its local agents and puppets to oppose, undermine and counter the Duterte regime’s assertion of an independent foreign policy, the Duterte regime urgently needs to work with the national democratic forces to build a patriotic alliance with deep
and wide support among the broad masses.

The revolutionary forces are also keenly interested in forging a patriotic alliance with the Duterte regime as this can serve the aspirations of the Filipino people to achieve national sovereignty and end foreign intervention in order for the country to plan out and tread an independent path of mass-oriented
development and progress.