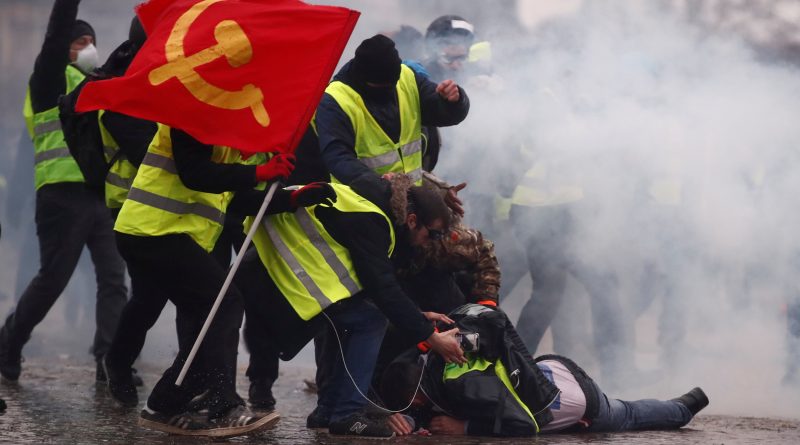 On 17 November 2018, 300,000 people of the working class and the middle class mainly from the suburban and rural areas of France rose up in militant mass demonstrations to protest the fuel tax hike and rising fuel prices. Characteristically, they wore the yellow vest to signal their economic and social distress. They had been inspired by an online petition signed by almost one million people.

Eighteen mass demonstrations, centered in Paris and carried out nationwide, broke out up to the most recent one of March 16, 2019 dubbed as “The Ultimatum”. The just demands of the yellow vest movement have expanded from the lowering of fuel taxes to the reintroduction of the solidarity tax on wealth, increase of the minimum wage, expansion of social services, the implementation of citizen’s initiative referendums and the resignation of President Macron and his regime.

The Macron regime has responded with a heavy hand by launching physical attacks by the police on the demonstrators with the use of water cannons, tear gas grenades, flash balls and baton charges.
It is but just that the demonstrators have fought back with the use of sticks, cobblestones, car blockades, control of roads and roundabouts, destruction of traffic surveillance cameras, the burning of the expensive cars of the big bourgeois and mass entries to the upper class restaurants and shops.

The yellow vest demonstrators enjoy the support of the broad masses of the people who condemn Macron, the investment banker turned president, as the promoter and enforcer of the neoliberal policy which favors the big bourgeoisie and its best-paid executives at the expense of the workers and the rural people. They are enraged by the use of police violence during mass actions and by the false promises made by Macron before and after every mass action.

The yellow vest movement has influenced similar mass movements in Europe and elsewhere in the world, whose participants wear the yellow vest and raise demands against the tax and other exploitative policies of the big bourgeois government. Most of the influenced movements have a benign and progressive character directed against the exploitative policies of bourgeois governments. But a few are directed against migrant workers and others unrelated to the monopoly bourgeoisie.

At any rate, such a phenomenon as the yellow vest movement is welcome and praiseworthy for taking up the just grievances of the working class and the middle class and exposing the grave ills of the oppressive and exploitative capitalist ruling system. It shows that there is a wide and deepgoing mass base of social discontent and resistance that the Marxist-Leninist revolutionary party of the proletariat can avail of in winning the battle for democracy and aiming for the socialist revolution.###