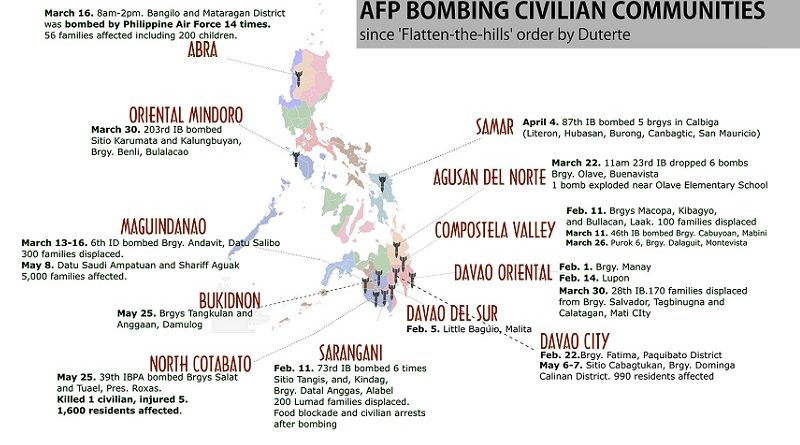 The CPP and all revolutionary forces in the Philippines are united with the NDFP Negotiating Panel in urging their counterparts GRP to resume the fifth round of formal talks to discuss the substantive agenda of socio-economic reforms.

There are two key reasons why the GRP did not want to proceed with the fifth round of negotiations. Firstly, it stubbornly insists on their demand for the NDFP to sign a bilateral ceasefire agreement prior to negotiations on any other substantive agreement. Such a demand has become increasingly counterproductive.

Secondly, the GRP wants the Party leadership to recall its declaration to the NPA to carry out more and more tactical offensives in the face of the GRP’s all-out war and imposition of martial law in Mindanao. Such was a foul attempt by the GRP to hostage the peace talks in order to pacify the NPA, while it continues to intensify armed offensives against the people, consolidate its military rule and lay the ground for the nationwide imposition of martial law.

The Party received the recommendation of the NDFP Panel and NDFP Chief Political Consultant Jose Ma. Sison for the Party to reconsider its earlier declaration to the NPA. The revolutionary forces also heard the retraction by Defense Secretary Lorenzana that martial law in Mindanao is not directed against the NPA, however empty and self-contradicted by his consequent order for the military to go against the NPA for its “illegal activities”.

Heightened AFP offensives under martial law all over Mindanao, however, do not encourage such a reconsideration at this time. The Filipino people clamor for the NPA to wage more and more offensives amid aerial bombardments, artillery shelling and machine gun strafing and worsening abuses of human rights committed by the AFP.

In the final analysis, the cancellation of the fifth round of NDFP-GRP formal talks was brought about by the GRP’s all-out war and martial law and its demand for the NPA to silence its guns while the din of the AFP’s cannons, bombs and heavy gunfire thunder against the people.

The Party calls on the Filipino and Moro people to unite firmly against the Duterte regime’s martial law. The Duterte government and its military and security officials are fanning the flames of Islamophobia by raising the bogey of “Islamic radicalism”, imposing martial law restrictions against Moro communities and subjecting the people to “profiling”.

The Party denounces Duterte and the AFP for the complete disregard of the Moro people in Marawi City whose communities and homes have been subjected to all-out shelling, bombing and strafing. As a result of all-out bombardment, tens of thousands have sought refuge outside the city. People who could not leave have been forced to become refugees in their own homes. Their movements are being severely restricted by checkpoints. Aid, relief and human rights workers are being prevented from entering the city being ravaged by aerial bombardments in the pretext of pursuing the so-called Maute terror group.

The Party joins the people in denouncing the creeping nationwide martial rule. Even as the martial law declaration covers only Mindanao, all military units and police forces have gone on red or full alert in North Luzon, Central Luzon, the National Capital Region, Bicol Region, Central Visayas, Eastern Visayas, Negros and Panay. They have imposed their threatening armed presence in public places, parked tanks in government offices and roadsides. Checkpoints have been set up as well in Tacloban City on the utterly ridiculous reason of “solidarity with martial law in Mindanao.”

The Filipino people must strongly protest the authoritarian threat of Duterte to defy any possible action of the GRP’s Supreme Court and Congress and extend the effectivity of his martial law declaration to as long as he and the military wants. They must demand the immediate lifting of martial law.

Communist Party of the Philippines
29 May 2017