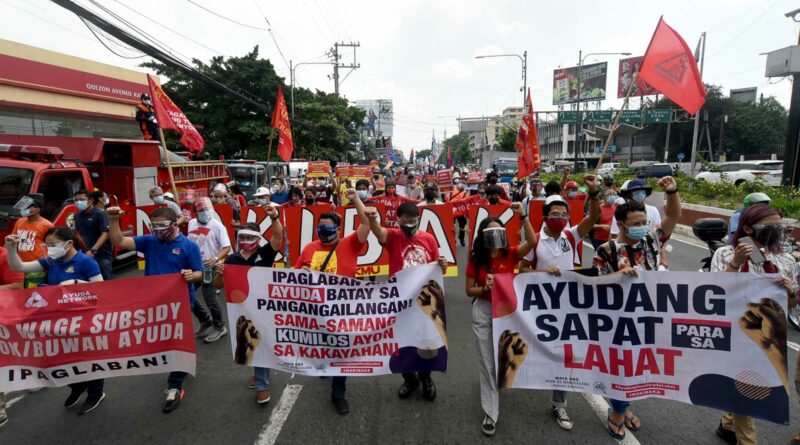 On May 1, 2021, the united ranks of workers, peasants, the urban poor, youth, and all democratic peoples are militantly standing up for the celebration of International Labor Day.

The people welcome this day with a living spirit of struggle and struggle for the rights and welfare of the Filipino people. Beyond solidarity with the working class, this celebration is one of the most vivid manifestations of the oppressed masses’ desire for a future free from the exploitation of the ruling class under the global system of capitalism.

The Filipino workers are suffering even more severely today due to the Duterte administration’s gross negligence and inaction amid the dire economic situation and the ongoing pandemic.

In the more than 400 days of Duterte’s fascist lockdown, up to 12 million Filipinos have been reported unemployed or any other source of income, largely as a result of the closure of the economy and various industries for more than a year. Of the 1.9 million people who returned to work in February 2021, almost half of them were contractual or informal employees.

At the same time, a large part of the population of the basic masses still does not receive any form of aid or assistance from national or local governments.This is despite ₱ 178.5-billion in funds from Bayanihan 1 and 2 that have not been utilized based on data as of February 2021.

In the face of these conditions, it is now the primary responsibility of the state to address the calls of the people. The mayor here is the national call for ₱ 10,000 aid for those who lost their jobs due to the pandemic, and ₱ 100 wage increase for all workers and farm workers.

But instead of focusing on addressing the needs of the people, the regime prioritizes puppetry of imperialist bosses and intensifying fascist terror.

Only in March, the Corporate Recovery and Tax Incentives for Enterprises or CREATE was passed into law, which increasingly favors the entry and investment of large companies within the country. Following this, Duterte labeled as important and should be expedited changes to the Public Services Act, Foreign Investments Act, and Retail Trade Liberalization Act.

The purpose of the Public Services Act is to allow the full intervention of foreign corporations in the transportation, communications, and other public services industries. Also, the Foreign Investments Act aims to reduce the base number of Filipino employees required for foreign companies to do business in the country. While the Retail Trade Liberalization Act is for reducing the capital of foreign investors or doing business in the Philippines.

Duterte’s open courtship of foreign capitalists while the country is mired in hunger and poverty is a great insult to the Filipino masses. This is compounded by the regime’s shameless surrender of Philippine sovereignty in the face of its deafness and blindness to the desecration of Philippine waters. Instead of taking action, Duterte hides in the narrative of “indebtedness” his shyness over the issue of Chinese intervention.

The Duterte regime has flatly refused to militantly oppose China’s entry into the country’s territory but has not the slightest doubt that it will rape its own people.

As March approached, there was a series of attacks, illegal arrests and arrests, and open killings of the masses, activists, organizers, and unionists. Bloody Sunday will be remembered where nine were killed while six were illegally arrested from the provinces in Southern Tagalog. One of them is Manny Asuncion of BAYAN-Cavite — a mass leader from the working class who has been brought by decades of social exploitation and oppression to the path of struggle.

Just three weeks later, the regime also killed Dandy Miguel of the Pamantik-Kilusang Mayo Uno while on his way home. That night, it was clear from his clothes that he had carried with him all his life the fight for a worker like him— ”Wages. Work. Rights. Fight back. ”

It is clear to the impoverished masses that the fascism of the Duterte regime is the number one obstacle to achieving their call for a medical solution to the pandemic and the right to economic aid and assistance.

It is no longer hidden from the collective consciousness of the people that the greater threat to the lives of Filipino workers is now Duterte’s fascist horror.It will boldly take on the challenge of earning a living despite the pandemic — from daily travel, socializing with hundreds of fellow workers and citizens, and sacrificing one’s own fatigue and health — because it is sure that the Duterte regime’s negligence and fascism is the ultimate. will kill the adventurous masses.

And as the crisis of imperialism intensifies, Duterte’s fascist horror will only intensify.

In various parts of the world, the struggle between the workers and the oppressed masses is erupting due to the worsening economic and political crisis around the world. Duterte’s imperialist bosses are getting desperate. They are struggling to consolidate their power. In addition, Duterte will further defend the welfare of the Filipino masses in order to fulfill the wishes and orders of his bosses, and gain greater support and assistance for the upcoming national elections.

However, no one is confident that the Filipino masses will be able to enjoy comfort at the hands of the shivering, fascist, and oppressive Duterte regime.

The people’s initiative to address the people’s immediate problems has sprung up one after another. From the community pantries in many cities, communities, and provinces, to the orchards and plantations of the peasants and the urban poor — the united masses vividly recognize their strength and power.

The Kabataang Makabayan offers a red salute to all workers who continue to struggle despite the layers of abuse and oppression suffered under semicolonial and semifeudal society. Especially to the workers and all the proletariat who have embraced the sacrifice and hardship of the armed struggle — including the New People’s Army — for its desire to finally eradicate the exploitation of the proletariat within a world capitalist system.

On May 1, 2021, we celebrate not only the militant and militant history of the working class in the struggle for its legitimacy. Above all, we welcome the promise of a future that will offer the people the fulfillment of all that the proletariat has fought for since the Paris Commune of 1871.

International Labor Day is the forerunner of the success of the working class.