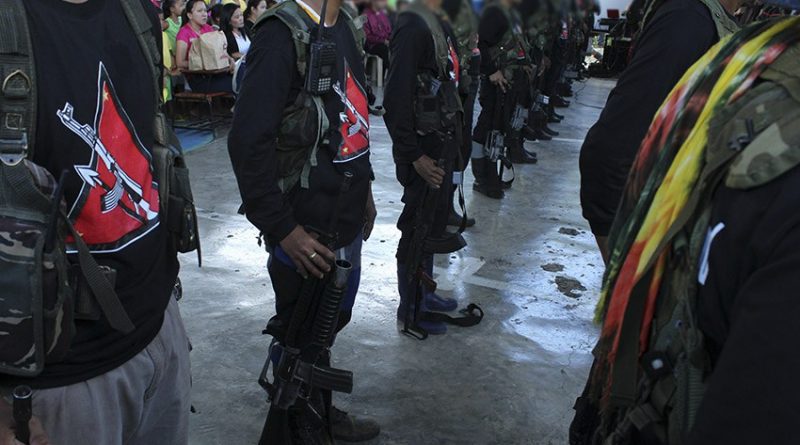 Seven soldiers died in an encounter with the New People’s Army in Kalamansig town in Sultan Kudarat on Tuesday, March 21.

In a statement, NPA spokesman Ka Dencio Madrigal said the attack was a “punitive action” given to the 2nd Marine Company of Marine Battalion Landing Team. Madrigal accused the marines of being “paid guard dogs” protecting the open pit mining operations of the David M. Consunji, Inc.

Madrigal also denied the army’s statement that six rebels were also killed in the artillery bombardment following the encounter.

“The Marine Brigade in Far South is desperately lying through its teeth in claiming that 6 Red fighters were killed by their artillery bombardment after the NPA’s successful tactical offensive. Not one of the NPA units in Sultan Kudarat was hit by their bombardment,” Madrigal said.

The NPA spokesman said the AFP’s bombardment only managed to destroy farmlands and forest covers in Brgy. Hinalaan and the surrounding barrios.

Madrigal also criticized business tycoon David Consunji and the army for “sowing terror” in the the Lumad populated town of Kalamansig.

“Since the 1980s, Consunji brazenly purloined 102,954 hectares of land from the Lumad and peasants of Sultan Kudarat, South Cotabato and Maguindanao for his various businesses, including a logging concession that deforested large mountain areas in these provinces,” Madrigal added.

Madrigal said the upcoming peace talks between the government and the National Democratic Front of the Philippines must “dismantle” Consunji’s vast destructive enterprise and ensure that “the Lumad and peasants are given back the right to the productive lands.”

Meanwhile, Capt. Jo-an Petinglay, spokesperson of the 6th Infantry Division, as quoted saying in report said the clash killed only one soldier, with eight soldiers currently being treated.

The army also claimed that two rebels died in the skirmish but were taken away by their comrades while retreating.

Maj. Gen. Carlito Galvez, commander of the Armed Forces of the Philippines Western Mindanao Command also said: “It is with grief that we report to you the death of one of our soldiers during the firefight. We will make sure that his remains be accorded with the highest honor and his family be given the most assistance that the government can provide.”