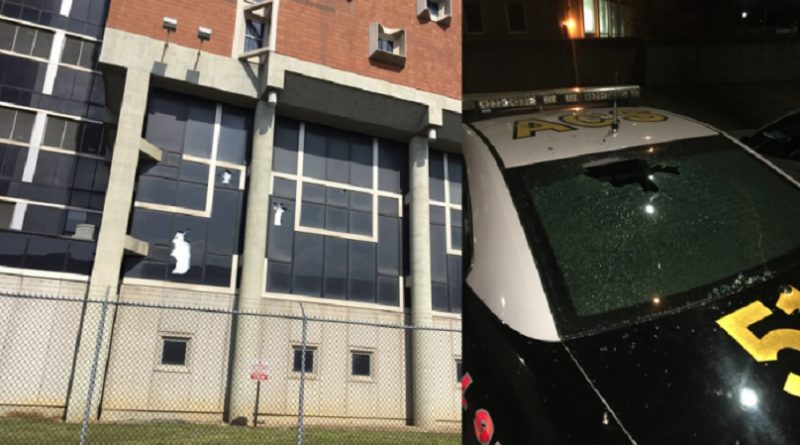 On March 18th, prisoners at Allegheny County Jail in Pittsburgh, Pennsylvania began a sit-in. Eighty prisoners took part in the action to demand more case workers, better medical services, and a legitimate grievance procedure. Monday March 20th, masked demonstrators converged on the jail in solidarity with those protesting inside and smashed windows of the jail, a security camera, and several police vehicles. The action was broken up after police arrested eleven protesters. Indiscriminately slapping felony charges on anyone they could get their hands on. When the police attack our comrades they have every right to rebel, to fight back and to hold firm to the principles which put us in direct conflict with torture chambers like Allegheny Jail. These comrades in solidarity with the prisoners did not fear entering into the belly of the beast and now we all must bravely defend them. Their charges include multiple trumped up felonies including conspiracy, rioting, possessing tools of a crime including fucking ball caps and black clothing. The bourgeois media wasted no time at all in posting identities to destroy the lives of the activists arrested, attempting to sentence them in the readers mind before trial, attempting to portray the rebels as drug fueled maniacs. The arrested includes some of our close comrades and supporters—revolutionaries committed to living in service of the people. While Social Democrats balked in the face of oppression and in traditional fashion ran to protect themselves only, the revolutionary section of Maoist and anarchist comrades showed great courage in confronting the pig system.

Allegheny County Jail (ACJ) confines more than 2,500 people, and its population has increased by 70% in the last two decades. ACJ has a long history of abuse and was the subject of a 2010 FBI investigation that found officials there were covering up abuse of prisoners. Health conditions at the jail are also notoriously bad; eleven people died while incarcerated at ACJ in just 2014 and 2015. On March 21st revolutionary communists and anarchists in Pittsburgh converged on ACJ to stand in solidarity with those prisoners, pushing the chant of: “brick by brick, wall by wall, every prison has got to fall!” A day after, the capitalist press was crying over broken windows, as if these windows had families and loved ones – much like the inmates who face daily mental and physical torture do. The system knows there wouldn’t be broken windows if there wasn’t the violence and trauma, in the form of rape, the withholding of medical care, harassment by guards, and the deafening anomie of boredom, that comes with being locked up in the cramped urine-soaked dungeon cells of this capitalist-imperialist prison system. During the march several were arrested on multiple trumped-up felony charges. Every single person arrested, upon arriving into ACJ, were locked in the small processing cells for 23 to 24 hours, and with no mattress or blanket to boot. With only dirty floors and small metal shelves to sleep on, one comrade went a whole day and night, sleep deprived, without anticonvulsants for their seizure disorder. The enemy should be afraid and are correct in treating us as dangerous. They show how fearful they are when they do, because they know when they take one of us, we always gain one more. But this does not happen without us moving, nor does it happen without creating a safety-net for those who are arrested. If they want to frighten us with the prospect of decades-long jail time on the basis of extremely flimsy evidence, they should know they’ll face a flood of moral and material support. We call upon all our supporters to help assist in raising funds for our arrested comrades, if you wish in your heart to physically smash every cop car and every prison then donate a few dollars to those arrested and accused of such rebellion. Defend the Allegheny rebels! In Austin we have a firm principle of jail support for our abducted rebels, we stand in utmost solidarity with the comrades in Pittsburgh some of whom we have enjoyed close camaraderie with, who have spent tireless hours in support of the proletarian revolutionary cause. These charges are severe and some have 4 felonies each if we do not come through for these comrades they will face long term prison sentences, which will only serve to crush rebellion in its infancy. In the conditions of growing fascism of Trumps USA these arrests much like the hundreds of arrests around  J20 are nothing short of raw state repression to beat fear into the hearts of the people—hearts which right now cry out for REBELLION.

“When the prison doors open the real dragon will fly out!”  – Ho Chi Minh