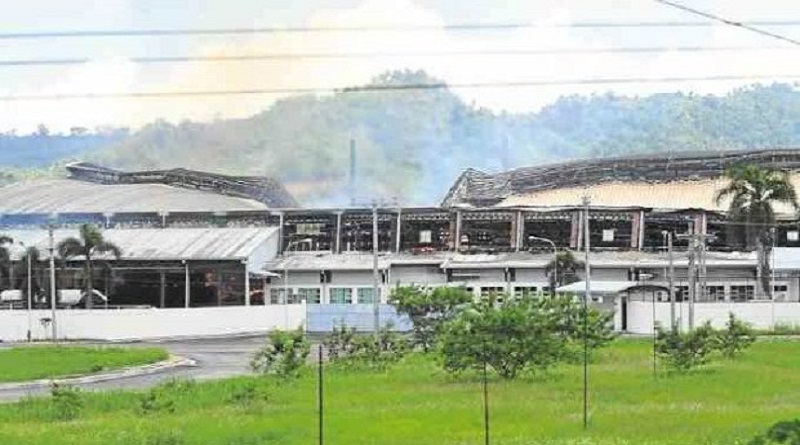 The Regional Operations Command of the New People’s Army congratulates Red commanders and fighters of the 1st Pulang Bagani Battalion for serving punishment against the landlord-comprador Lorenzo family in simultaneous annihilative tactical offensives at dawn yesterday, April 29, in different parts in Davao City.

The NPA confiscated 39 firearms in yesterday’s series of offensives launched to hold the Lorenzo-owned Lapanday companies accountable for their numerous crimes against their lowly-paid workers and against peasants and Lumad who were dispossessed of their lands.

At around 2 am, Red fighters wearing NBI uniforms attacked the box and plastic manufacturing plants of Lapanday Foods Corp. in Brgy. Mandug. The NPA disarmed security guards and gutted down the company’s compound along with its equipment. Seized firearms included 13 shotguns, two caliber .45 pistols, eight caliber .38 pistols and 9 UHF radios. Red fighters also hit the reinforcement troops of Task Force Davao with command-detonated explosives in the nearby Brgy. Tigatto at around 5 am.

In Brgy. Bunawan, another company-sized NPA unit struck the Lorenzo-owned Macondray Plastic Plant at past 2 am and seized 2 shotguns and 2 pistols from its security guards.

At past 3 am, a PBB company-sized unit raided the heavily-guarded Lorenzo’s cattle ranch and banana plantation in Brgy. Pangyan in Calinan. After a firefight with the Lorenzo’s armed goons, the Red fighters seized one caliber .30 sniper rifle, two M16 rifles, six shotguns, three caliber .22 rifles with scope, vests and magazines, ammunition and military radio. Two Red fighters were martyred in the firefight.

The Pangyan ranch coddle criminal elements and counter-revolutionary fanatics who are employed by the despotic Lorenzo clan to protect its anti-people business interests. This was the very same ranch where retired M/Sgt. Jose Manero, chief of security for Lapanday, was arrested by NPA leader Ka Parago in May 11, 2008. As the NPA’s Prisoner of War, Manero divulged the company’s numerous violations on human rights, including the killing of several banana plantation workers, in its bid to ensure huge profit and expansion of its operations.

The NPA’s annihilative and punitive action against the Lorenzos in Davao City serves as revolutionary justice for landless tillers and exploited workers of its banana plantations and manufacturing plants in the region.

For decades, the Lorenzo-owned Lapanday Foods Corporation based in Mandug, Davao City amassed its wealth out of the outright exploitation and landgrabbing of many areas around the region through sheer intimidation and displacement of poor peasants and Lumad. Lapanday engaged in wanton environmental plunder as communities around its plantations complain of poisoning through the company’s unrestrained use of aerial spray and other harmful chemicals.

The NPA’s latest tactical offensive serves as stern warning against other despotic members of the feudal landlord gentry who continue to wield fascist control to deter genuine land reform and nationalist industrialization in the country. It is a just retribution and an act of social justice against a feudal lord and capitalist that continue to be protected by state instrumentalities, the AFP–PNP and the various Philippine governments since the 1980s.