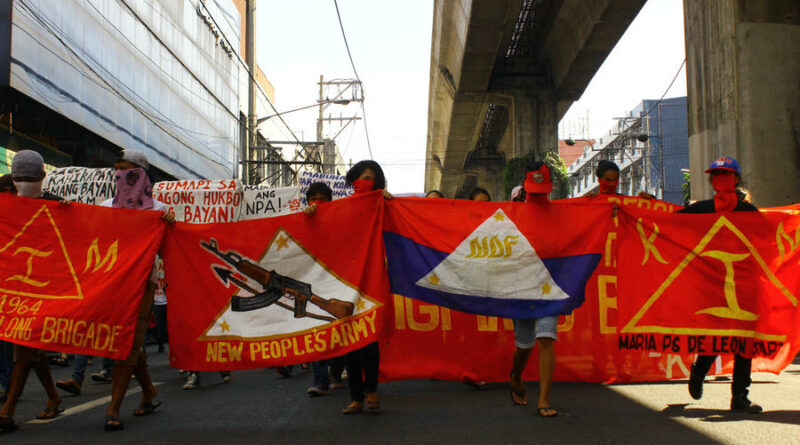 The country now surpasses the one-year mark since Duterte’s imposition of the community quarantine. Only a daily basis since, striking were the number of people apprehended, subjected to illegal forms of detention and punishment, and forced to pay exorbitant fees and penalties for even the smallest of quarantine violations.

In 12 months, the regime accomplished nothing but intensify its fascist terror while simultaneously plunging the masses into deeper poverty and hunger. What started as a public health crisis that stirred panic worldwide turned into a complete economic and political meltdown. Global unemployment skyrocketed and reached unequaled numbers while regimes everywhere in the world bared its fangs by rushing to implement mostly fascist responses to the pandemic.

Now, the Duterte regime is flexing its superiority in fascism and state terrorism as it does everything in its capacity to tighten its grip on power and extend indefinitely the masses’ suffering.

A healthcare system in limbo

The onset of the coronavirus pandemic last year rattled nations’ public health designs to its cores. In the Philippines, it stripped and exposed major flaws and weaknesses in the healthcare system—being mostly privatized, it was not equipped to handle a new deadly virus.

But the Duterte regime was not merely hesitant on its approach—it was outright skirting the people’s healthcare demands. From free mass testing for all, provision of free personal protective equipment (PPE), efficient contact tracing schemes, to fairer wage and compensation for medical frontliners, Duterte turned a deaf ear to not one, not two, but all those urgent matters.

So while other countries were able to slowly recover and stump the spread of the virus, the Philippines entered the longest lockdown the world has seen.

Now, cases keep on increasing exponentially the way it did half a year ago as mass testing remains inaccessible to the working class Filipino. And with doubts surrounding Duterte’s vaccine procurement decisions, a huge chunk of healthcare workers remain apprehensive, while majority of the population from basic sectors are just downright skeptical about their chances of getting inoculated.

A state run by imps

Playing nonchalant about the enormity of the problem that was currently ravaging the country, the regime was occupied with something else.

Controversies of corruption stacked on top of one another when Duterte’s legislative gofers granted him special powers with Bayanihan 1 and 2. The laws gave Duterte unchecked authority to calibrate appropriations and fund allocations in light of the pandemic. No sooner were his allies like Health Secretary Francisco Duque III under fire for allegations of overpriced procurement of PPE.

The regime was then further pounded on upon reports of loans after loans that were never liquidated or fully explained. Especially since cash aid distribution for the most affected sectors remained elusive while budget for tourism and Duterte’s infrastructure project Build, Build, Build remained an untouched priority.

Behind the scenes, Duterte felt the inevitable defeat in the 2022 elections. Clearly, the masses were fuming and tensions were heightened between sparring political parties of the ruling elite. Thus were born plans to ensure political longevity—either through a Charter Change, a cancellation of elections, propping daughter Sara Duterte or a close ally to run for office, or all of the above.

A population left grasping in abyss

But back on the ground, the people were writhing in pain and anger.

From the start of the pandemic, the state flaunted its criminal negligence by abandoning the agriculture sector which was the first most affected by the lockdown. With markets closed and transportation suspended, farmers were forced to give vegetables away for free; piles and mountains of crops were left to rot.

In the cities, teachers and other professions were pushed to find other means to support their families, as drivers and small operators of public utility vehicles (PUVs) like jeepneys and cabs were forced to hit the streets to beg for alms. Duterte’s jeepney phaseout threatens the complete loss of livelihood for almost 100,000.

The hasty yet drastic measures imposed by the Duterte regime a year ago resulted in greater troubles. With the plummeting of supply, the prices of pork and vegetables soared and became the vendors’ and consumers’ burden. Restrictions in traditional public transportation makes commuting way more costly for the the working class. The under-cooked distance learning scheme left millions of students unable to continue their education.

Masses are neck-deep in debt from expenses for food, budget for children’s online classes, and even utility bills. Many remain jobless.

A regime basking in hellfire

With the upsurge in calls for accountability and the palpable agitation of the masses, Duterte responds with all-out fascist terror.

With a staggering 2021 budget of ₱19 billion, the NTF-ELCAC uses the Anti-Terror Law as a pretext to wage an intensified campaign of disinformation and terrorist-tagging against legal mass-based organizations and mass leaders to discredit the people’s legitimate demands and justify the rapid climb in the cases of illegal arrests and extrajudicial murders perpetuated by the Philippine National Police (PNP) and the Armed Forces of the Philippines (AFP), in both urban centers and the countryside.

Yet the truth stands: no matter how vicious Duterte plays himself up to be, he and his generals know for certain that destroying the New People’s Army (NPA) and the Communist Party of the Philippines (CPP) is nothing more than a pipe dream for the ruling class.

Overall, Duterte’s militaristic lockdown and all-out fascist terror has brought nothing but hunger, suffering, and death to the people’s homes. The masses are starving for justice and they cannot stomach another year under the terrorist regime.

The country is standing on the brink of history being made. All democratic and patriotic youth must work doubly hard to see through the ouster and absolute removal from power of the entire Duterte regime.

Kabataang Makabayan urges the youth: Join the NPA to decisively advance the national democratic revolution. Strive for just and lasting peace. Make Duterte and all his fascist butchers pay for their crimes and atrocities!