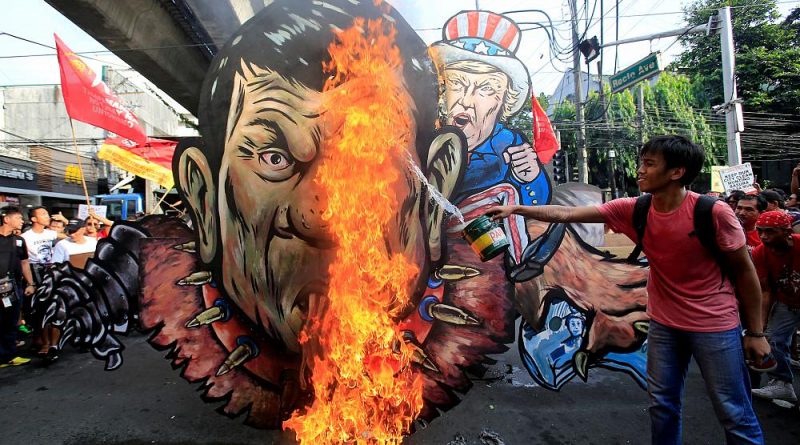 The NDFP-Mindanao vehemently denounces the one-year extension of martial law and the suspension of the writ of habeas corpus in Mindanao, which is a step further in laying the ground for Duterte’s fascist dictatorial rule. And since the Communist Party of the Philippines (CPP) and the New People’s Army (NPA), which are nationwide revolutionary organizations, are included as “bases” for the extension, martial law is thus imposed, de facto, on a nationwide scale, whose implementation, by way of the bloody all-out war and Oplan Kapayapaan, goes beyond Mindanao towards both the Visayas and Luzon.

With the backing of his supermajority cohort in congress, Duterte secured for himself and the AFP/PNP absolute control over the economic, political and even the cultural life of the people in the island. Duterte’s AFP and PNP, through their brutal operations, can control the economic activities (such as farming) of the masses, especially those which they suspect to be in support of the revolutionary movement. They can impose upon local government units to redirect their resources to buttress its unjust war and attacks against the people. The AFP/PNP even threatened to deprive media people of their right to cover activities of the CPP and the NPA such as their anniversary celebration, an act which disregards the media’s independence and the freedom of the press.

This is the latest in a series of draconian measures imposed by the US-Duterte regime that aims to deliberately kill any semblance of democracy left in the nation. With the extension, the Filipino people are forced to swallow Duterte’s tyranny. Part of its deceitful strategy is to focus on Mindanao first and perfidiously work its way up to encompass the Visayas and Luzon, so that, in dividing the nation, Duterte will avoid facing the impact of a nationwide uprising against his fascist rule. A one-year extension will also serve to “test the waters” and feel the people’s pulse, but will not limit it to further extensions beyond 2018. Duterte’s minions in congress enabled him to further consolidate his tyranny even in shameless and blatant violation of their own Constitution, which they, in all hypocrisy, swore to uphold and defend.

With the extension, the people of Mindanao can only expect the escalation of Duterte’s and the AFP’s brutal, anti-people all-out war against the revolutionary movement and the peasant and Lumad masses. The extended and more inclusive martial law will further give license to the AFP to employ indiscriminate airstrikes using jet fighters, attack helicopters and armed drones, shelling with newly-bought 155mm howitzer cannons, and direct brutal attacks by regular AFP troops and their paramilitary goons – all aimed against civilian communities in the countryside, towns and cities. These atrocities will lead to the evacuation and displacement of innocent civilians in their hundreds of thousands.

Recently, Duterte once again alluded to an attack by so-called “ISIS-inspired terrorists” sometime in the next few weeks somewhere in Mindanao, possibly in North or South Cotabato or even in Cotabato City. With an extended martial law in place, we can expect Duterte’s AFP to rain down its destructive force once more against another city or town, similar to what it did to Marawi City. With this, the Duterte regime’s war against the Bangsamoro will doubtlessly intensify, stifling further the Moro people’s struggle for their genuine right to self-determination.

The AFP/PNP claim that cities are more “peaceful” under martial law, but this is a big lie. This is just another devious tactic to deny support from people in the urban centers to the masses who are victims of militarization in the countryside. The truth is, under military rule, Mindanao will lay witness to an unprecedented rise in the body count of extrajudicial killing victims in urban centers, either through the bloody Oplan Tokhang, which has been recently taken over by the PNP, or through the political assassination of leaders and members of legitimate progressive organizations, whom Duterte threatened to crackdown.

However, despite all of Duterte’s Hitler-like fear-mongering and shock-and-awe tactics, the revolutionary movement, led by the Communist Party of the Philippines (CPP), is unperturbed and determined to fight. Revolutionaries as well as the struggling masses would rather face death fighting rather than bow down to Duterte’s fascist dictatorship.

As soon as Duterte exposed himself as a blood-thirsty fascist who desire nothing but his rise as a dictator, he has already signed his own death certificate by way of his regime’s downfall. But Duterte’s ouster will only take place under the resolute unity of the people. Thus, now more than ever, it is the moral responsibility of all exploited and oppressed classes and sectors in society, including the middle classes as well as the patriotic and enlightened gentry, in Mindanao and the rest of the country to unite in a broad anti-fascist united front to oust the US-Duterte regime. The NDFP-Mindanao also calls upon the people of Luzon and the Visayas to march hand in hand with the people of Mindanao and fight against Duterte’s fascism and eventually boot him out and bury him and his tyranny in the dustbin of history.#