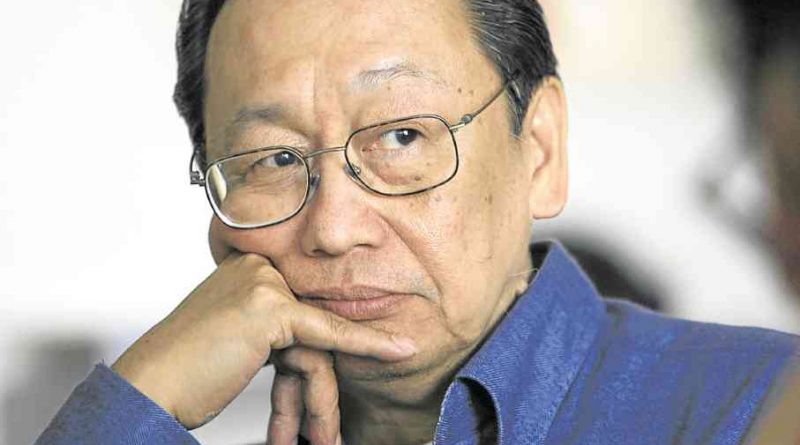 The Negotiating Panels of the Government of the Republic of the Philippines (GRP) and the National Democratic Front of the Philippines (NDFP) were poised to hold the fifth round of formal peace talks in Oslo when GRP President Duterte went into a daily series of anti-communist rants from November 18, 2017 onwards and subsequently issued Proclamation 360 to terminate the peace negotiations with the NDFP and Proclamation 374 to designate the Communist of the Party of the Philippines (CPP), New People´s Army (NPA), their suspected supporters and financiers as ¨terrorist¨.

Ironically, the two negotiating panels were about to make the biggest advance in the peace process by finalizing and initialing the drafts of the general amnesty to release all the political prisoners listed by the NDFP, Part I Agrarian Reform and Rural Development and Part II National Industrialization and Economic Development of the Comprehensive Agreement on Social and Economic Reforms (CASER) and the Coordinated Unilateral Ceasefires (as prelude to a bilateral ceasefire agreement).

The panels expected that within the first quarter of 2018 CASER would be ready for signing by the principals and the Comprehensive Agreement on Political and Constitutional Reforms (CAPCR) would be negotiated and forged in coordination with the processes of the GRP Congress in revising the 1987 Constitution and possibly arriving at a consensus of all major political forces on what ought to be a federal system of government. But obviously Duterte had all along wished to preempt and exclude the NDFP from what is now coming to light as his scheme of fascist dictatorship under the pretense of federalism.

Duterte had allowed his panel to engage the NDFP panel in back channel consultations in October 2017 in Utrecht and in subpanel bilateral meetings in Manila from September to November 2017 to complete the aforesaid drafts for panel-to-panel processing until he abruptly changed his mind and terminated the peace negotiations. The somersault followed his extended conversations with US President Trump who supposedly assured him of political and military support for a plan to crack down on the CPP and NPA and finish them off before the end of 2018.

Termination of Peace Negotiations Necessary for Duterte Fascist Dictatorship
Although the plan is overambitious and quite impossible to achieve, it is necessary for Duterte to terminate the peace negotiations and slander the CPP and NPA by labeling them as ”terrorists” to pave the way for further extension of martial law in Mindanao for the whole year of 2018 and the eventual nationwide expansion of martial law directed against the CPP and NPA. This is in line with Duterte´s scheme of imposing his fascist dictatorship on the Philippines.

Even before the first extension of the proclamation of martial law in Mindanao could lapse at the end of 2017, Duterte boasted that he had defeated the Dawlah Islamiyah (Maute and Abu Sayyaf groups) in Marawi City and therefore he had basically no more need for martial law in Mindanao. But he found in the extension of the martial law proclamation a device for including the CPP and NPA as targets in a further extension to the whole of 2018 through the expediency of terminating the peace negotiations and accusing the CPP and NPA of escalating violence and endangering public safety.

Duterte was quite confident of getting the further extension of martial law in Mindanao because of his ” supermajority¨” in his rubber-stamp Congress. He also has a steady majority of at least eight of the justices in the Supreme Court (four are his own recent appointees and five are appointees of Gloria Macapagal Arroyo) to uphold his martial law proclamation in the same way that they have been able to dismiss the plunder case against Arroyo and allow the burial of Marcos in the Libingan ng mga Bayani due to Duterte´s super-corrupt alliance with the Luzon-based dynasties of Marcos, Arroyo, Estrada and other notorious plunderers..

Duterte is hell-bent on realizing his scheme to reimpose a fascist dictatorship on the Filipino people by revising and in effect scrapping the 1987 Constitution under the pretext of adopting a federal system of government. The trick is similar to that of Marcos in pretending to opt for a parliamentary form of government in order to scrap the 1935 Constitution and install a fascist dictatorship under the cover of transitory provisions.

Federalism As Pretext for Imposing Duterte Fascist Dictatorship on the People
Duterte is not really keen on establishing a federal system of government but on actually installing a highly centralized unitary kind of a presidential dictatorship on top of regional governments run by dynasties, including warlords and the most corrupt bureaucrat capitalists like himself. The big comprador-landlord state servile to foreign monopoly capitalism will remain intact under his scheme.

To satisfy his appetite for autocratic power, Duterte finds it absolutely necessary to use martial law nationwide in a hysterical and futile attempt to intimidate and suppress the armed revolutionary movement, dissent and opposition in general. The suspension of the writ of habeas corpus provides an effective cover and license for abducting, dispossessing, torturing and murdering revolutionaries and all people who oppose him. Even now, he cannot wait for a court to approve his designation of the CPP and NPA as ¨terrorists. Ḧe has repeatedly called on his military minions to kill them upon sight.

The Bicameral Resolution No. 8 with the title ¨Constituting the Senate and the House of Representatives, of the 17th Congress, into a Constituent Assembly by Adopting a Federal Form of Government and for Other Purposes¨ is already on the rails and will be railroaded when congressional sessions resume in January 2018. Duterte and his cohorts will be the sole determinant of the content of the pseudo-federal charter. The charter is already slated for ratification during the May 18 barangay elections. The Kilusang Pagbabago, the Duterte troll army and the pro-Duterte hacks in print and electronic media are all arranged to rah-rah the ratification.

Even before Duterte is able to get a new constitution for his despotic purposes, the Filipino people have become familiar with his propensity for mass murder and
deception in Oplan Tokhang. Combine this with the suspension of the writ of habeas corpus under martial law and you can expect a far bigger catastrophe than the Marcos fascist dictatorship in terms of of murder and mayhem.

In the absence of any revolutionary social transformation, the country will be getting more of the same ruling families of big compradors, landlords and bureaucrat capitalists at all levels of government. Corruption will continue to run rampant on top of excessive expenditures for establishing and elaborating on the regional level of government. The US and other multinational firms will continue to plunder and ravage the human and natural resources of the Philippines.

To get the blessings of the US and other imperialist powers, the new pseudo-federal constitution will get rid of the nationality requirements or restrictions on foreign investments in violation of economic sovereignty and national patrimony by simply inserting the phrase, “unless otherwise provided by law.” Precious limited resources for economic development, at best through centralized and regional planning, will be dissipated by profit remittances and capital repatriation by foreign monopoly firms, bureaucratic corruption and rising bureaucratic and military and police personnel for the central and regional levels of government.

The ever worsening crisis of the semicolonial and semifeudal ruling system will continue to result in the divisiveness of the reactionary classes, the intensification of the anti-imperialist and class struggle, the further rise of the armed revolutionary movement, dissatisfaction of indigenous peoples and national minorities and stronger currents of separatism among the Bangsamoro.

Surpassing Marcos as Best Recruiter and Supplier of the Armed Revolution
Duterte is bound to surpass Marcos as the best recruiter and supply officer of the armed revolution, as the unwitting wrecker of his own regime and ruling system and as provider of an ever more fertile ground for the growth of the people´s democratic revolution through people´s war. However, Duterte does not have as many years left as Marcos had when he imposed fascist dictatorship in 1972. His aberrant speech and behavior reveal the state of his mental and physical health.

His propensity to monopolize political power and bureaucratic loot and his ability to run the reactionary government Mafia style will eventually work against him due to his own personal and class infirmities and more importantly due to the systemic crisis and lethal blows from the revolutionary movement and the people. The adverse results of his broken promises will soon bear heavily upon him. The broad masses of the people are already taking him to task for failing to solve the problem of illegal drugs, for destroying the entire Marawi City and for terminating the peace negotiations with the NDFP.

By his pseudo-independent foreign policy, Duterte is trying to turn the Philippines into a condominium of the imperialist powers. He thinks as if he can freely get, without strings attached, military equipment from these powers and limitless loans for limitless infrastructure building to buoy up the economy and keep himself in power. He has in fact allowed China to trample on the sovereign rights of the Philippines over the West Philippine Sea under the UN Convention on the Law of the Sea.

He is aggravating the semicolonial status of the Philippines as well as the underdeveloped, agrarian and semifeudal character of the economy.
This kind of economy is ever dependent on the export of cheap raw materials, semimanufactures and cheap labor, on the import of foreign manufactures for consumption and on an ever desperate resort to increasing amounts of foreign loans and speculative capital and to higher taxation to cover trade and budgetary deficits.

The broad masses of the people are angered today by the recently railroaded Tax Reform for Acceleration and Inclusion (TRAIN). This further raises the prices of basic goods and services and generates inflation by increasing indirect taxes (excise, sales and value-added taxes) just to cover tax cuts and tax holidays for the upper classes and fund the counterproductive spending and debt servicing by the state. The rates of unemployment and inflation, though understated in official statistics, are actually causing more poverty and misery on a wider scale.

Contrary to the assurances of his neoliberal economic advisers, Duterte cannot be saved by any increase in the GDP growth rate. The higher the growth rate, the bigger the take of the multinational firms, the big compradors and bureaucrat capitalists and the more severe the conditions of underdevelopment, mass unemployment and poverty afflicting the broad masses of the people. In the final analysis, the big problem for the US-directed Duterte regime is that the oppressed and exploited people have an armed revolutionary movement for undertaking meaningful change in terms of national and social liberation.