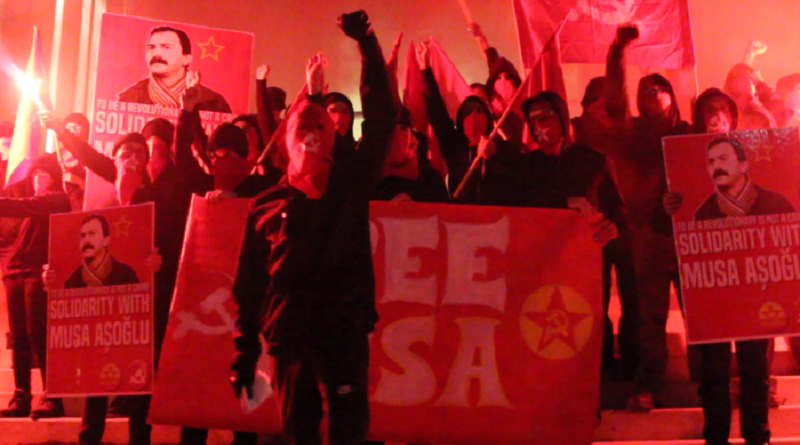 On December 20, in Austin, Texas, a lightning rally was held outside of the federal court building in solidarity with Musa Aşoğlu, who began trial that same day. Below are a video of the statement and action.

On December 14th a meeting was held to discuss support for Musa and to teach those in attendance more about Musa as well as Halk Cephesi. The chosen venue which we have redacted for security was filled to capacity. Below is a copy of a talk given at the event.

Musa Aşoğlu is a Turkish revolutionary who was arrested in Hamburg, Germany, on December 2, 2016. He has been accused by the fascist Turkish intelligence service of being a central committee member of DHKP-C (Revolutionary People’s Liberation Party/Front).

Because DHKP-C has targeted US imperialists and their interests in Turkey by attacking military and diplomatic personnel, striking a blow against US imperialism, the reactionary US government seeks to extradite him and has placed a $3 million bounty on his head.

Musa is a Dutch citizen, but the US will do everything in its power to extradite and eliminate him. We must therefore organize the fight to prevent this and take actions in solidarity with all those fighting on his behalf in Germany, with the comrades locked in armed struggle in a life-or-death battle with the Turkish state, and with all those who fight US imperialism.

in the banned DHKP-C, but the Turkish state has long arms and deep pockets. If Musa is extradited, his chances of exoneration and freedom are greatly reduced.

The long reach of the Turkish state can be seen in the recent arrests of nine Turkish revolutionaries in Greece on the morning of November 28 of this year. These nine revolutionaries are also being charged with membership in DHKP-C. They are being held and tortured based on a lie that they were plotting the assassination of Turkish fascist president Erdoğan. Syriza, the allegedly leftist government of Greece, has shown its true colors as the bourgeoisie in the service of Turkish AKP fascism. Social-democrats once again truly prove themselves the twin of fascism.

Revolutionary organizations the world over have begun solidarity actions in defense of Musa, who had been living underground prior to his arrest, which took place in a raid on a safe house. The only “evidence” of his alleged crimes was provided by the Turkish anti-terrorist file service, which is famous for its use of torture to acquire confessions and for falsifying data. These pigs are right now foaming at the mouth for the blood of our comrade.

Musa Aşoğlu is fifty-six years old and has spent most of his life as a revolutionary fighting against US imperialism, Turkish fascism, and the reactionary order of the bourgeoisie. He has, as an internationalist, championed progressive causes all over the world in solidarity with the world proletarian revolution.

As a Turkish comrade in Europe informed me, his father recently passed away. His father’s death happened while Musa was in prison on this recent charge. Musa is so beloved by the people and revolutionaries that his father’s funeral was visited by a bloom of red flags and a procession of masses, workers, and revolutionaries, who attended in Musa’s stead.

We in the US and especially in Austin know from experience that rising fascism leads to the state criminalizing all of the people’s revolutionary and antifascist organizations. We see evidence of this trend in reports from the Department of Homeland Security, as well as local and federal police reports that name Red Guards Austin. We have seen this in the tireless campaigns of reactionaries to have “Antifa” labeled a terrorist organization. We have seen the repressive apparatus of the state attempt hysterically to label people as members or leaders of such organizations. We should understand this as a series of moves building steadily and inevitably toward the banning of revolutionary communist organizations.

We have seen this same process take place in India, China, Turkey, and the Philippines. We should understand what fascism has in store for us—and the practical and necessary response to this understanding means carrying our water as antifascists, internationalists, and anti-imperialists.

Musa is one of us! His life is an example of what it means to be a revolutionary antifascist. We must oppose the US imperialist bribe of $3 million and show our comrades abroad that there are those in the belly of the beast who stand with Musa Aşoğlu.

We must unite behind the slogan “Making revolution is no crime!”

Death to fascism and imperialism!