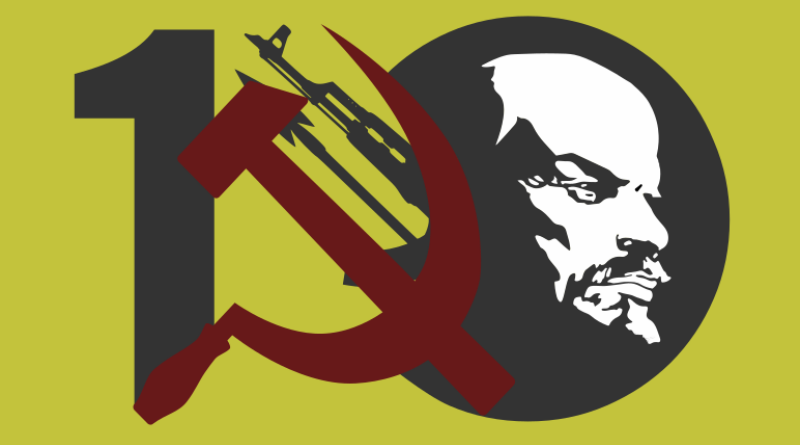 The Communist Party of the Philippines (CPP) joins the proletariat and toiling masses around the world in celebrating the centennial of the Great October Socialist Revolution. The significance of this celebration cannot be overemphasized amid the continuing crisis of the world capitalist system. The worsening exploitation of the proletariat and oppressed peoples points to the continuing validity and urgent necessity of waging socialist revolution.

The world pioneers of the socialist system, the Russian workers and their peasant allies, were imbued with the spirit of revolutionary struggle which today inspires our resistance against imperialism and all forms of exploitation and oppression. The principles and lessons crystallized by the Bolshevik Party under Comrade V.I. Lenin now serve as invaluable guidelines for the Party in leading the two-stage revolution, the new democratic and socialist revolutions, in the Philippines.

By the turn of the 20th century, the world capitalist system had entered the moribund stage of monopoly capitalism or imperialism. The capitalist crisis had unleashed widespread unemployment, destruction of productive forces and inter-imperialist conflict. By the time World War I broke out in 1914, the stage for the socialist revolution had been set.

By successively smashing the feudal monarchy, overthrowing the bourgeois state and establishing a proletarian dictatorship, the Russian working class put itself in a position to carry out deep-going restructuring of society, build socialism in Russia, and serve as the consolidated base of world proletarian revolution.

Guided by the Communist Manifesto and other scientific socialist treatises by Marx and Engels, Lenin, J.V. Stalin and the Bolsheviks led the proletariat and people of the Soviet Union in building socialism. In less than four decades, Russia went through the period of civil war and war communism; the New Economic Policy under which the state managed bourgeois transitional reforms to hasten the recovery of industry from the ravages of the civil war and help the recovery of the peasantry and thus consolidate the worker-peasant alliance; followed by one five-year plan after another which promoted rapid socialist industrialization and agricultural collectivization and modernization from 1928 onwards.

Before World War II started in 1939, Stalin described the Soviet Union to be the most advanced country in the world technically. It had surpassed the leading capitalist countries in the economic, social, scientific and cultural fields, as well as in terms of democracy and people’s freedom. During World War II, the Soviet Union successfully repelled the invasion of Nazi Germany and dealt strategic blows to the global fascist forces leading to its defeat and the end of the war in 1945.

With revolutionary prescience, Lenin declared that imperialism is the eve of socialist revolution. Indeed, the victory of the socialist revolution in Russia ushered in an era of epic struggle between the bourgeoisie representing the old decaying capitalist system and the proletariat and oppressed peoples representing the modern socialist system. The 1917 October Revolution served as the global Iskra, the spark which ignited the socialist conflagration across the world through several decades of national and socialist resistance against imperialist wars and aggression, colonial subjugation and semicolonial rule.

The victory of the October Revolution made the Soviet Union the center of the world proletarian revolution. Lenin called on the proletariat in the capitalist countries in Europe to seize leadership of the spontaneous uprisings that arose from the chaos and crisis of World War I. At the same time, he gave particular importance to promoting the national revolutionary wars in the backward countries. In 1919, he led in the establishment of the Third International or the Communist International (Comintern) which served as a center for cooperation, coordination and leadership. It facilitated the establishment of communist parties in countries where these were not yet formed.

In less than half a century from the October Revolution, the socialist camp expanded and covered one-third of the entire globe. From Europe to the the Americas hundreds of millions of workers and peasants were freed from national and class exploitation and oppression. China, the most populous country, would tandem with the Soviet Union, as bastions of the world proletarian revolution.

The emergence and rise of modern revisionism (the new bourgeoisie ideology hiding behind the curtain of socialist rhetoric) has resulted in great setbacks and capitalist reversals since the late 1950s in the Soviet Union leading to open bourgeois rule in 1991 and since the late 1970s in China resulting in all-out social chauvinism and state monopoly capitalism. These reversals, however, do not negate the victories attained by socialism. In fact, the exploitative and oppressive conditions under which workers and peasants are again subjected to as a result of capitalist restoration, underscore the continuing validity and necessity of waging socialist revolution.

On the occasion of the centennial of the Great October Socialist Revolution, it is essential for the proletariat to grasp the theory of continuing revolution under proletarian dictatorship to fight modern revisionist ideological degeneration and prevent capitalist restoration. Mao Zedong profoundly understood Marx’s assertion that socialism represented an entire historical epoch of continuing class struggle and developed Lenin’s theory of the dictatorship of the proletariat to point out the necessity of waging socialist rectification campaigns and cultural revolutions to prevent the bourgeoisie from gaining a foothold within the socialist system and seizing political power from the proletariat.

Armed with this theory, we can fully comprehend the significance of the past century of proletarian revolution and bourgeois counterrevolution and how the proletariat has come a long historical way since the Paris Commune of 1871. With Mao’s theory of continuing revolution, the proletariat’s revolutionary determination will never wane in their resistance against imperialism and all forms of exploitation, oppression, fascism and reactionary rule; their socialist enthusiasm and optimism will always remain high as they achieve greater victories in the future.

Although different in form and intensity, the current protracted global capitalist depression stem basically from the same conditions of capitalist overproduction which impedes capitalist production and expanded reproduction. Such conditions impel the monopoly capitalists to intensify imperialist plunder. For more than 50 years now, the imperialists have imposed a neoliberal policy regime across the world in order to intensify the exploitation of the working class and accumulation of profit.

Since the 1970s, the Filipino people have been subjected to relentless assault of neoliberal policies. This has resulted in worsening economic crisis and backwardness, intensified forms of exploitation and oppression, widespread landlessness, unemployment, contractualization and other forms of “flexible” employment, rising poverty and grave social inequities. The US imperialists continue to exercise hegemony and carry out military and political intervention. It projects its military presence in Philippine waters and anywhere a perceived or contr ived conflict gives occasion.

The Filipino and world proletariat celebrate the centennial of the Great October Socialist Revolution amid grave capitalist crisis. What better way to mark this historic feat than by imbibing its spirit and revolutionary optimism to fuel their determination to advance the proletarian revolution and national liberation struggles amid strategic imperialist decline. The world proletariat anticipates an incoming new era of socialist revival and resurgence.

The Filipino proletariat recalls how they used Marxism-Leninism-Maoism as guide in repudiating modern revisionism and reestablishing the Party in December 26, 1968 on a firm theoretical basis and lead the revolution based on the concrete conditions of Philippine society. The Leninist adage “Without revolutionary theory, there can be no revolution” is indubitably demonstrated by how the Party, imbued with Marxism-Leninism-Maoism, has led the Filipino people from one victory to another in protracted people’s war. It has carried out rectification movements to repudiate modern revisionism, strengthen its grasp of revolutionary theory and strengthen its determination to lead the revolution.

We remain in the era of imperialism, of moribund capitalism, as propounded by Lenin. It is presently in the grip of a prolonged global depression. Amidst the glut of commodities, the proletariat and people suffer from low wages, hunger and lack of necessities. Key global centers of capitalism are invariably inflicted with economic slowdown, stagnation and recessions amid worsening crisis of overproduction. The multipolar imperialist world is marked by increased military spending, frenzied strategic deployment of military forces around the world and proxy wars. Inter-imperialist contradictions between old and emerging imperialist powers continue to heighten.

The US and other imperialist countries are being led by increasingly jingoist regimes which threaten to unleash wars of widespread destruction. The mad man in Capitol Hill ponders plans for the destruction of the world while his minion, the Malacañang mad bomber, plots to cling to power at all costs in the face of increasing isolation from the Filipino people. They chant expletives to the beat of aerial bombs and rockets, while singing praises to neoliberalism, fascism, racism, genocide, ethnocide and misogyny.

Over the past year, the revolutionary movement has withstood the US-Duterte regime’s all-out war of suppression. The Party has strengthened itself ideologically, politically and organizationally and wields the New People’s Army and the united front as its key weapons in advancing the two stage revolution. The national democratic mass movement and revolutionary armed struggle continue to advance solidly.

Despite massive and relentless military campaigns by battalion- and division-sized operating troops, strafing, artillery and aerial bombardment, the people’s army and revolutionary masses have stood their ground, adjusted to new methods, learned lessons, and strengthened their forces in the process. Commands of the New People’s Army at various levels have responded to the call to launch tactical offensives, rapidly expanded and recovered guerrilla fronts, and increased the membership, formations and fighting capacity of the people’s army.

In waging revolution, the Party and all revolutionary forces are inspired by the current struggles and victories of the Filipino people as well as by those of the October revolutionaries a century ago and the subsequent worldwide revolutionary resistance of the proletariat. All Party cadres and members are determined to further deepen and advance their study of the theory and practice of Marxism-Leninism-Maoism, and enrich these with lessons from the Philippine revolution.