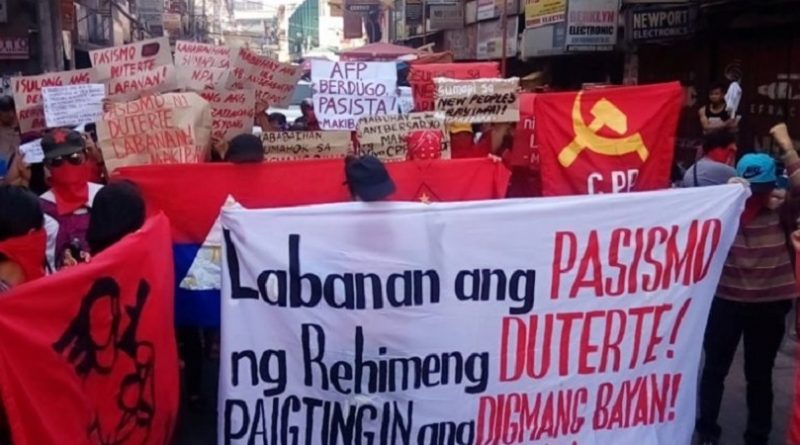 On behalf of the revolutionary movement in Eastern Visayas, MAKIBAKA, the national democratic underground mass organization of women, extends its highest salutations to all the toiling Filipinas on the occasion of the International Working Women’s Day. We raise our fists high for all the exploited and oppressed women who in various fields – whether as homemaker, activist, or Red fighter – struggle against the feudal-patriarchal system upheld by the US-Duterte regime.

The Filipina woman today suffers greatly under the worsening conditions of a rotting semicolonial and semifeudal society. By the sweat of her brow she toils in backbreaking labor in the factories, farmlands and in homes, receiving little to no compensation while abused and reduced to a mere child-rearing machine. Millions of poor families rely on her strong will and wit to weather the skyrocketing prices of commodities, the diminishing value of daily wages, and increasing unemployment. She suffers harassment from workplace superiors who threaten taking away her job if she makes so much as a peep.

No woman is spared from the wrath of the monster borne out of this system: Duterte, terrorist leader of the regime, who has openly called for such obscene acts of violence against her and her people. In the countryside, she is forced to flee with her family as her community is shelled and terrorized by his all-out war, while in the cities, her home is either demolished or remains a relocation promise unfulfilled. He represents the worst of macho-fascism, attacking the womanhood of workers, peasants, teachers, domestic helpers, overseas workers, journalists, church people, lawyers – all women from different walks of life.

But the Filipina should take pride in that she has won the ire of such a tyrant for her courageous acts of defiance. Every day she inspires the millions of Filipinos to stand up to this misogynist and persist toward toppling his dictatorship.

As we celebrate today the victories of the Filipina women’s liberation movement, let us also remind ourselves that this feudal-patriarchal system that oppresses her can only be finally smashed through the victory of the national democratic revolution and going on to socialism. The Filipina can only be free if the Filipino people are free.

We women thus find our place in the national democratic revolution: as activists, members of underground mass organizations, Party comrades and full-time Red fighters. The struggle embraces us and gives us a platform not only to advance women’s issues but to assert our equal position with men. In the people’s army we serve as Red commanders, political officers, medics, educators, propagandists, and cultural workers – roles we could never attain elsewhere. The Filipina is freed by grasping the power of the gun.

As the country is at a crossroads amidst deepening political and economic crises, we are called upon to take advantage of such favorable conditions for people’s war and contribute to its advancement and ultimate victory. Let us be part of the rich revolutionary history of the New People’s Army which for fifty years under the guidance of the Party has given us a voice and paved the way for our liberation.

As we face another fascist dictatorship in the making, let us emulate the example of Evelyn Dublin, martyr of Southern Leyte, who, after leaving her comfortable life as a teacher and serving full-time in the NPA during martial law, made the ultimate sacrifice of laying down her life so that a few more fascist troops can be killed.