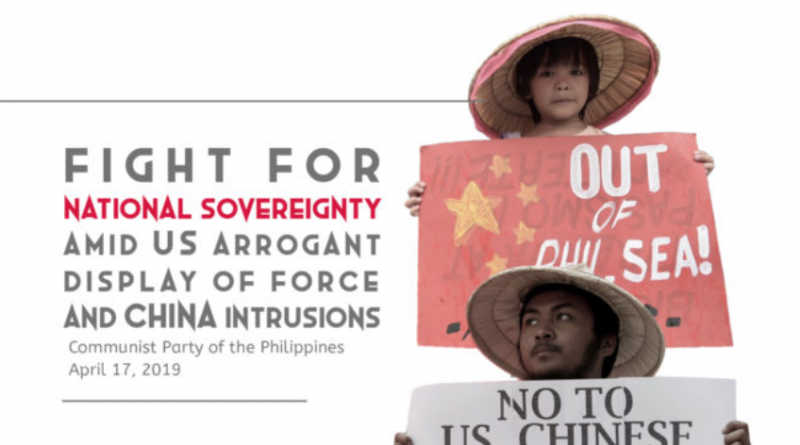 Events over the past several weeks reveal the country’s dismal state of non-independence with the US-Duterte regime displaying utter slavishness and inability to uphold Philippine national patrimony and sovereignty. The country is now practically a playground for big power bullies to trample upon and assert their military and economic might. The struggle to uphold Philippine national sovereignty is now most urgent.

On the one hand, China has emplaced hundreds of sea vessels, mostly fishing boats but suspected to be carrying armed troops, around the Spratly Islands. They have practically taken over fishing grounds and other resources in areas which form part of the Philippine maritime territory. In addition, they continue to ravage coral reefs in incessant land reclamation operations to build military facilities and fortify their military presence.

On the other hand, in a more direct and arrogant display of military superiority, 3,500 American troops swaggered into the country, welcomed by grovelers in the AFP. They brandished armaments such as nuclear warships, jet fighters and amphibious assault vehicles in line with the April 1-12 Balikatan exercises. Using the country as base of operations and the exercises as cover, the US military sailed the USS Wasp and flew F-35Bs in the vicinity of the Spratlys traumatizing Filipino fishermen. The USS Wasp is the third US warship this year to conduct maneuver operations in the area. This show of force aims to strengthen its military foothold in the country, and assert its hegemony in the South China Sea and the entire Pacific region.

Big power saber-rattling increases the threat of war in the Pacific and undermine Philippine national sovereignty. Relative to China, the US imperialists carry out a far larger number of aggressive military incursions and provocations as it attempts to stem its strategic decline. It uses the pretext of so-called freedom of navigation operations and using military treaties with the Philippines as cover.

They form part of the heightening struggle for military and economic superiority between the big power bullies. Both sides are interested merely in advancing their competing aims to control trade routes, sources of raw material, cheap labor, spheres of investment, export markets, debt slaves and military outposts.

The self-serving Duterte regime has acted servile and kowtowed to both sides. Seeking only to further his bureaucrat capitalist interests, he has betrayed the Filipino people by surrendering the country’s patrimony and sovereignty and allowing foreign military forces to use the country as launchpad for its operations.

To curry China’s favor, he has given up the country’s maritime territory as recognized even under the UN Convention on the Law of the Seas. He has also entered into onerous loan agreements and government contracts under which the country’s patrimony has been turned into collateral. For facilitating such a sellout, Duterte and his cronies have been rewarded with fat kickbacks aggrandizing his questionable wealth.

On the other hand, the Duterte regime has allowed the United States to use the Philippines as base for its Operation Pacific Eagle-Philippines. US military presence and intervention has heightened practically turning the country into a large military base to permanently station American troops, build secret facilities and stockpile their weapons within AFP camps, mount a growing number of war exercises, set up radars and conduct drone surveillance, sail their warships across Philippine seas and dock them in civilian ports, and train and have operational control over AFP units. The Philippines remains bound to unequal military agreements. In exchange, the US has extended military assistance to Duterte’s all-out war supplying it with rifles, artillery, refurbished helicopters, drones, and other equipment.

These big power bullies profess friendship and alliance with the Filipino people but are, in fact, interested only in pursuing their own strategic geopolitical interests. On the one hand, China claims to share its economic power, but merely covets the country’s mineral resources to feed its industries. It makes large amounts of loans available in line with its self-interest of exporting surplus capital to make other countries buy its surplus steel and absorb Chinese labor.

The US claims “ironclad commitment to defend the Philippines” against “Chinese aggression,” when in fact, it is, and has long been, the biggest military aggressor in the country. The US maintains military presence in the country to defend its own ultranational interests, not Philippine sovereignty. Recall that when it had other priorities, the US military establishment abandoned the Philippines after it was occupied by the Japanese imperialists in 1941.

US imperialism is not a friend, rather an enemy of the Filipino people. It has subjugated the country through a century of colonialism and neocolonialism through military domination. In the economic sphere, it has imposed trade agreements and policies which force dependence on imports, debt and foreign investments. Big American corporations have plundered the country’s forests and natural resources, grabbed vast agricultural tracts, exploited cheap labor, siphoned super profits, all the while stunting the economy and condemning it to a backward and non-industrial state and exporter of cheap resources and semimanufactures.

Relative to the US imperialists, which have long plundered and devastated the Philippines, China is a late-comer, scraping the bottom of the country’s wealth.

The country remains under US imperialist domination. The ruling state in the Philippines is a client-state of the US, with the US-trained and -indoctrinated Philippine military serving as its strongest pillar. Duterte is its current chieftain. Armed with US-supplied weapons, the fascist regime employs and directs state violence against the Filipino people and all their patriotic and democratic forces.

These forces, including the Communist Party of the Philippines, stand firmly and militantly for the cause of national and social liberation. They demand foremost an end to US imperialist domination and condemn the subservience of the Philippine government. They clamor for the abrogation of US-RP military treaties and US military interventionism and seek to free the country from its economic and political clutches.

As patriots, they also condemn China’s bullying, military presence and occupation of Philippine maritime territory in the South China Sea and despoiliation of sea resources and denounce the failure of the Duterte regime to carry out the necessary diplomatic and political steps to assert the country’s rights. They oppose as well the onerous loans and anomalous overpriced infrastructure contracts with China.

In denouncing China’s intrusions and economic oppression, however, they do not lose sight of the bigger enemy and reserve the stronger condemnation to US imperialism whose military forces continue to maintain a foothold on Philippine soil, who control and arm the Philippine neocolonial state and which pose as the biggest impediment to the Filipino people’s aspiration for national and social liberation.