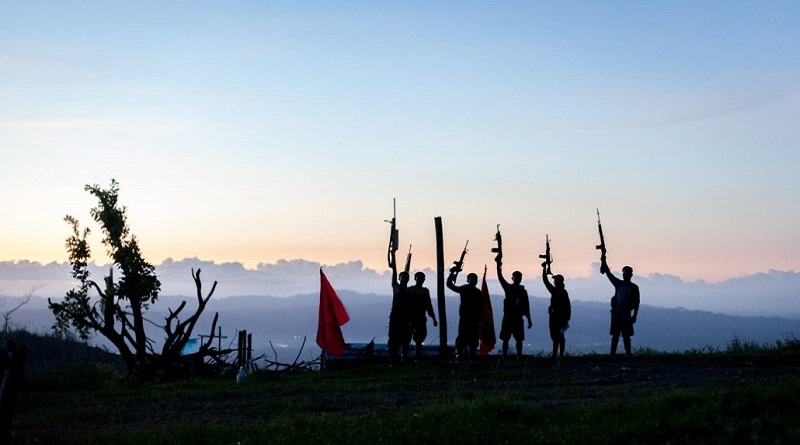 Three tactical offensives were launched almost simultaneously by NPA units around the region on February 14, even as the warmongering 10ID set loose virtually all of its combat troops in a fascist rampage in the hinterlands of Southern Mindanao.

A company of Red fighters belonging to the ComVal–Davao Gulf Sub-Regional Operations Command successfully fended off the combat operations of the 28IB in Lupon, Davao Oriental when it struck the enemy’s scout platoon at around 8:00 in the morning in Brgy. New Visayas. Five AFP troopers were confirmed killed while several others were wounded.

A few hours later, in a mobile checkpoint mounted by another company in Brgy. Don Mariano Marcos of the same town, two active members of the 72nd IB-CAFGU were captured at a national highway at around 11:00 in the morning. Rene Doller, 34, and Carl Mark Nucos, 24, both of the 72IB CAFGU were taken as prisoners-of-war. Their .45-caliber pistol was also confiscated. They are being treated leniently and investigated for their possible crimes against the people and the revolutionary movement and involvement in their unit’s counterinsurgency operations.

Meanwhile, in Bukidnon province, the joint operation mounted by 72nd CAFGU and paramilitary Alamara was hit by Red fighters under the Davao City–Bukidnon Sub-Regional Operations Command at around 9:00 in the morning in Brgy. Matupi, Kitaotao.

Presently, the 10ID has forward deployed almost all of its combat troops in at least 26 towns in all the provinces of Southern Mindanao. It foolishly believes that unleashing fascist war against the revolutionary forces—even an all-out one—can accomplish what all the other internal and security plans in the past have failed to do. Spread thin and wide, however, its isolated troops only become vulnerable targets of military actions by the NPA in guerilla bases and zones where the masses loathe the AFP and want them punished for their numerous crimes against the people.

Amidst these relentless attacks, the NPA continues to defend the people by ensuring that their the insidious Oplan Kapayapaan’s civil-military and combat operations are made accountable for terrorizing peasants, Lumads and the masses. Around the country, bigger and more coordinated NPA units are launching heavy blows against AFP troops carrying out its bullheaded and costly all-out war at a time when the masses demand economic relief and for the peace process to be given a chance.