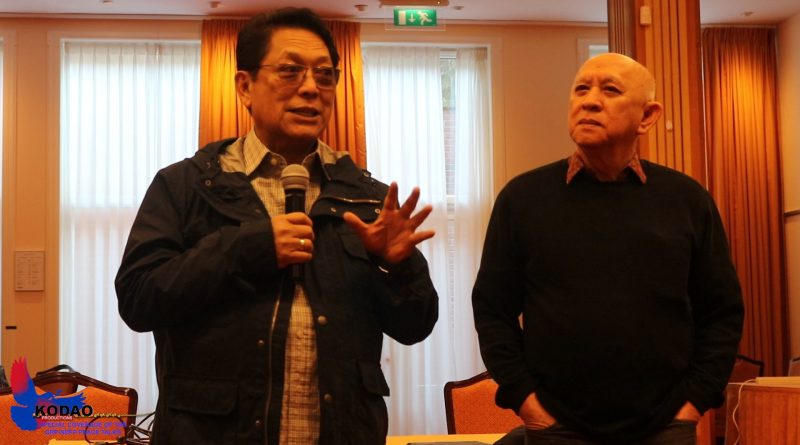 The GRP and NDFP negotiating panels announced the opening ceremony of their fourth round of formal talks is postponed to “around one or two o’clock in the afternoon” (six o seven o’clock in the evening, Philippine time) to allow discussions on President Rodrigo Duterte’s new instructions to his negotiators.

Speaking before hundreds of Filipino migrants in this country invited to attend the opening event originally scheduled this morning, GRP chief negotiator Silvestre Bello III (GRP) said they received a call from Duterte which they would first discuss with the NDFP panel.

“We apologize for the delay,” Bello told the disappointed migrants.

“I know many of you took a long bus ride to attend the opening ceremony, but these things happen (during negotiations),” Agcaoili said.

Both the GRP and the NDFP refused to divulge the nature of Duterte’s call and its implications on the holding of this round of talks.

The panels initially agreed during their March 10 to 11 informal talks in Utrecht to focus on the socio-economic reforms and bilateral ceasefire agenda for this round of talks.

But  Duterte said last March 25 he has to consult his security advisers on his government’s response to the Communist Party of the Philippines’ announcement to reinstate its unilateral ceasefire declaration in accordance with the GRP-NDFP Utrecht Joint Statement of March 11.

After the National Security Council meeting last Friday, Bello announced the GRP has decided not to declare a unilateral ceasefire.

It has happened before

Delays in opening and closing ceremonies of formal talks have happened in the 2011 formal peace talks and in the first three rounds of negotiations with the Duterte government.

The 2011 formal peace talks, the only one under the previous Benigno Aquino government, was very nearly scrapped after long-time NDFP peace consultant Allan Jazmines was abducted by the AFP a few hours before the scheduled opening. # (Report by Raymund B. Villanueva. Featured photo by Jola Diones-Mamangun)