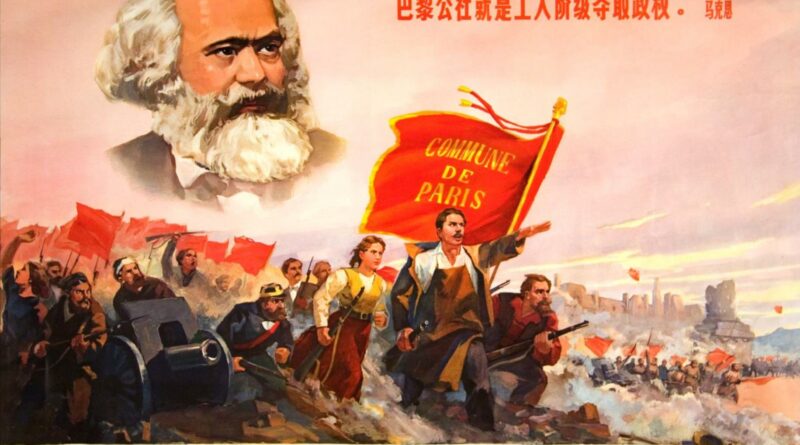 The Communist Party of the Philippines (CPP) joins the working class across the world in marking today the 150th year of the Paris Commune of 1871, the first victory of the international proletariat in waging socialist revolution and building a new society. Albeit lasting less than three months, the Paris Commune has served a lasting inspiration by demonstrating for the first time how workers and toiling people can overthrow the reactionary state of the bourgeoisie, establish working-class political rule and govern themselves democratically. It provided important lessons that helped guide the international proletarian movement in the era of socialist revolution that ensued at the start of the 20th century. The present generation of proletarian revolutionaries must continue to study the experience of the Paris Commune as they surmount the setbacks and defeats of the past several decades and shoulder the difficult tasks in leading and waging democratic and socialist struggles to usher in a new era of revolutionary resurgence.

The Paris Commune was borne out of an armed rebellion of workers who constituted the National Guards against orders by the Thiers government to disarm in compliance with the terms of surrender to the Bismarck regime after being defeated in the Franco-Prussian war. The communards drove out the bourgeois regime and decreed the dissolution of the standing army and the arming of the populace.

For 72 days (March 18 to May 28, 1871), workers of the Paris Commune established a democratic system of government. Workers enjoyed universal suffrage and elected officials who were directly answerable to the people. Leaders did not enjoy any perks or special privilege and received salaries equivalent to wages of ordinary workers. The elected leadership came from the ranks of workers who strove conscientiously to serve the interests of the masses and were subject to recall.

The workers and people were armed and mobilized to defend the Paris Commune and resist the counterrevolutionary attacks of the bourgeoisie.

The Paris Commune, however, was limited in ideology and policy, having been under the strong influence of anarchists (the Blanquists) and petty-bourgeois socialists (Proudhon). Some leaders were under the influence of Karl Marx and the International Workingmen’s Association but did not have the numbers to direct the Paris Commune. Nevertheless, it succeeded to implement democratic measures which addressed the urgent needs of the people who were suffering from grave socioeconomic conditions brought about by the war adventures of the French government. Among others, it took measures too ensure that all homeless are sheltered. It prohibited employers from imposing fines and making deductions on workers wages.

The Paris Commune was violently suppressed and crushed in a counterrevolutionary attack mounted by the bourgeois government which had reestablished itself in Versailles. It connived with the Bismarck government who released imprisoned French soldiers to allow the Thiers government to rebuild and consolidated its army. It mounted relentless armed attacks against Paris. The blood of 30,000 working class martyrs were spilt as the Paris Commune fell. However, as Marx declared, “Its martyrs are enshrined in the great heart of the working class.”

Marx drew important lessons from the Paris Commune which eventually guided the working class in subsequent years. In the preface to the 1872 edition of the Communist Manifesto, Marx and Engels stated that “One thing especially was proved by the Commune, namely, that ‘the working class cannot simply lay hold of the ready-made state machinery, and wield it for its own purposes.’” He further declared that the “next attempt of the French Revolution will be no longer, as before, to transfer the bureaucratic­military machine from one hand to another, but to smash it.”

Lenin further elaborated these lessons in “State and Revolution” where he systematically elaborated on the scientific and historical materialist analysis of the state as a product of the irreconcilability of class antagonisms, employing armed strength to exploit the oppressed classes. Drawing lessons from their own experience, he elaborated on the central revolutionary task of smashing the bourgeois state and seizing political power for the proletariat. Holding firmly to this lesson, Lenin and the Bolshevik party led the Russian proletariat to victory in 1917, mounting an armed insurrection to overthrow the reactionary state and vanquish the bourgeoisie and its landlord allies by dismantling its army, taking over the banks and industries and nationalizing the land.

Guided by the same lesson, Mao Zedong declared that “political power grows out of the barrel of a gun.” Firmly grasping this key point, the Communist Party of China led the proletariat and people in waging a protracted people’s war to accumulate strength until it was able to encircle the cities where imperialists, the big bourgeoisie and landlord classes were concentrated, and eventually, smash the center of state power.

The same key lesson drawn from the Paris Commune has guided every successful proletarian and democratic revolution over the past century and a half. It is also this basic principle that has guided the Filipino proletariat and revolutionary forces through the past five decades in which it has successfully accumulated armed strength and built political power by waging protracted people’s war in the countryside with the strategic aim of smashing the reactionary state in the cities.

It is of crucial importance for the international proletariat to grasp this basic lesson, that the key task to emancipate the proletariat is to smash the bureaucratic-military machine of the reactionaries and to replace it with a proletarian and people’s democratic dictatorship. The proletarian vanguard must always make the day to day tactical struggles and battles of the proletariat and people serve this strategic aim. They must guard against the counterrevolutionary obstructionists and saboteurs who prevent the workers and people from waging actual revolution to seize power from the reactionary classes.

The Paris Commune also demonstrated the dialectics of leadership and the masses, of the necessity of building a political center and harnessing the strength of the broad masses. It showed the necessity not only of destroying the bourgeois state, but of building a workers’ state to organize the political and economic affairs of society in line with the interests of the working class.

The weaknesses of the Paris Commune arising from the strong influence of anarchists and pettybourgeois socialists show the necessity of building a revolutionary party of the proletariat that is capable of ideological, political and organizational leadership, that is, guided by its class ideology as first expounded by Marx and Engels. The working-class party must be conscientious of both the strategic aims of the revolutionary proletariat and the tactics and urgent tasks that should be carried out to work towards those aims.

It showed the importance of having a center of leadership that relies on the masses and is capable of uniting and mobilizing all the positive forces and harnessing the strength of the people in undertaking the tasks of building and defending the revolution. It showed how the masses, armed and conscious of their role, can perform crucial tasks in running the state and the economy.

Beyond these basic lessons, however, it is important for the revolutionary proletariat to apply such principles to the concrete conditions in their own countries to determine the specific tactics to attain the common aim of smashing the state and seizing political power. It will be fatal for the proletariat to adopt a one-size-fits-all method or copying the tactics of Russia or China, or Cuba or Vietnam without understanding the particular conditions in their own countries and without studying the specific economic, political and physical conditions prevailing in their different national contexts.

As we mark the Paris Commune, let us celebrate the achievements of the international proletariat in building democracy and socialism across the world. For close to six decades, socialist revolution and construction flourished in Russia (1917 to 1956) and China (1949-1976) and other parts of the world and showed how the working class and toiling people can be masters of their fate, free from capitalist exploitation and enjoying the fruits of their labor. Socialism eliminated joblessness, ensured people’s health and education at the very time that imperialism reeled from massive unemployment, anarchy in production, waste and oversupply, hunger and poverty. With political power in their hands, the proletariat and toiling people were able to mobilize and direct social and human resources to serve their interests, liberating them from hunger, crisis, disease and superstition, and making history a materialization of their class consciousness.

In recalling the Paris Commune and celebrating victories of the international working class movement, we must also grasp the key lessons in the overthrow of proletarian dictatorship and defeat of socialist revolutions in the former Soviet Union and China leading to the restoration of the capitalist system, the exploitation and oppression of workers and peasants, bourgeois accumulation of surplus value, anarchy in production, unemployment and crises.

Drawing from practice, Mao Zedong elaborated on the theory propounded by Marx and Lenin, that class struggles will remain during the historical epoch of socialist revolution and construction, wherein bourgeois elements spontaneously arise from remaining factors of small-scale production. Mao sharply pointed out that the class struggle took the form of a two-line struggle within the Party and the ruling state between those who aim to persevere in the socialist road and those who wish to take the road back to capitalism. Mao put forward the theory of continuing revolution under proletarian dictatorship to oppose modern revisionism, carry forward socialist revolution and construction and prevent the restoration of capitalism. Mao exposed and struggled against modern revisionists who advocated the theory of developing productive forces as key to further raising the level of socialist society. In order to continue developing socialism to new levels, it is necessary to carry out revolutionization of the superstructure and relations of production, by waging cultural revolutions to free the masses from old ideas, social strictures and methods which prevent their empowerment and concentrate power and privileges in the hands of functionaries and bureaucrats from which arise the new bourgeoisie.

The revolutionary proletariat must grasp these lessons and understand that the defeat of socialism in Russia and China are temporary historical setbacks, just as the defeat of the Paris Commune was. The 150 year period since the first proletarian victory is, in fact, a short period in the course of the history of class struggles. For several years in the 1950s, a third of the global population was under the leadership of the dictatorship of the proletariat. In contrast, the capitalist system took more than two centuries from its first emergence in Europe in the 17th century before it could consolidate as a stable system and another century or so to become the dominant system in the world.

Even now, monopoly capitalism or imperialism incessantly generates conditions for socialist revolution. The contradiction between socialized production and private accumulation of capital continues to sharpen. The higher the mountains of wealth created by the proletariat and toiling people, the deeper they are engulfed in misery and poverty. As capitalist competition intensify, production becomes more efficient at the enterprise level, but more anarchic at the level of society and the world, resulting in oversupply, falling rates of profit, wastage and destruction of the environment.

We are in the eve of resurgence of socialist and people’s revolution. Across the world, workers and toiling people are rising up against oppression, exploitation and repression. Guided by the lessons accumulated from the Paris Commune, to the Russian and Chinese revolutions, the next round of socialist revolution and construction will surely achieve greater victories and reach even higher levels of success.