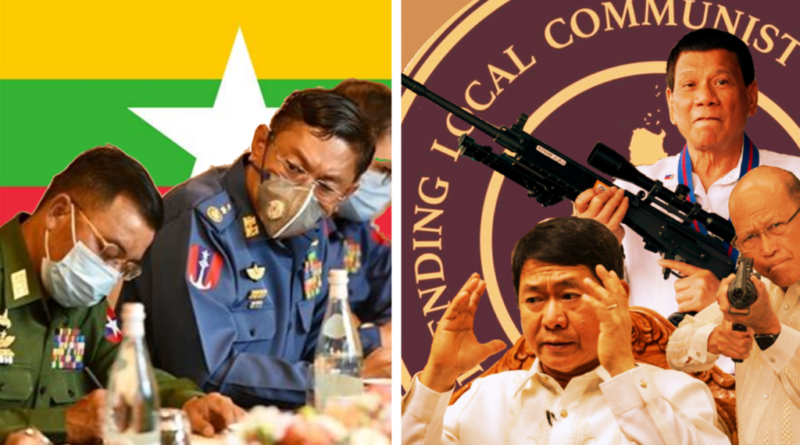 February 3, 2021: The Communist Party of the Philippines (CPP) joins the international community in condemning the February 1 coup d’etat and imposition of national emergency. Military leaders headed by Gen. Min Aung Hlaing have seized political power and imprisoned civilian elected leaders including Aung San Suu Kyi and other leaders of the National League for Democracy (NLD).

The military coup preempted the opening of the parliament which was elected in the November 2020 elections. The military leaders refused to recognize the results of the November elections where the military-backed party lost by a landslide to the NLD.

The coup marks a return to power monopoly by the military which has reigned supreme in Myanmar for more than 50 years. Under absolute military rule, the broad masses of Myanmar have suffered untold abuses, human rights violations, genocidal wars, plunder of economic resources and corruption by military officers. It was only in 2016 that Myanmar’s military agreed to “power-sharing” with elected civilian leaders, but only after being guaranteed with seats in parliament and granted the power to appoint the vice president, defense, internal affairs and other key officials.

Wielding untrammelled powers, the Myanmar military has trampled upon the democratic aspirations of the people with impunity, condemned the broad masses to gross poverty and expanded its economic interests. The 2017 military crackdown in the Rakhine State, which forced 700,000 Rohingyan people to flee to Bangladesh, benefited the companies owned by the military. Under the thumb of the military, Suu Kyi defended the Rohingyan pogrom before the International Court of Justice, damaging her reputation and international standing.

The CPP supports the resistance of the Myanmar people to the February 1 coup and the return to absolute military rule. The military dictatorship is rousing the broad masses of Myanmar to take to the streets, mount strikes, bear arms and fight back.

The Filipino people must learn lessons from Myanmar where the undemocratic evils of military forces wielding political power and leading the affairs of the state is demonstrated ever so clearly.

Despite the precept of “civilian authority is, at all times, supreme over the military” being enshrined in the 1987 constitution, the political power of the military generals has grown under the Duterte regime. To establish himself as a strongman, Duterte expanded the powers of the military and police, enlarging the budgets of the AFP and PNP, mounting wars and appointing former military officers to key government agencies.

Former and current generals of the AFP are actively invoking anticommunism to justify its interference in electoral politics, and its increasing role in dictating policy and budget priorities.

The entire Duterte government is practically under the authority of the NTF-ELCAC. Wielding vast powers, the NTF-ELCAC is a Duterte-military junta that compels all agencies of government to follow its every dictate under pain of being tagged as sympathizers of the communists.

The Filipino people must resist the growing powers of the military. If the military’s expansion of powers continues, especially under the NTF-ELCAC, the Philippines is not far off from going down the bloody path of Myanmar’s military dictatorships.