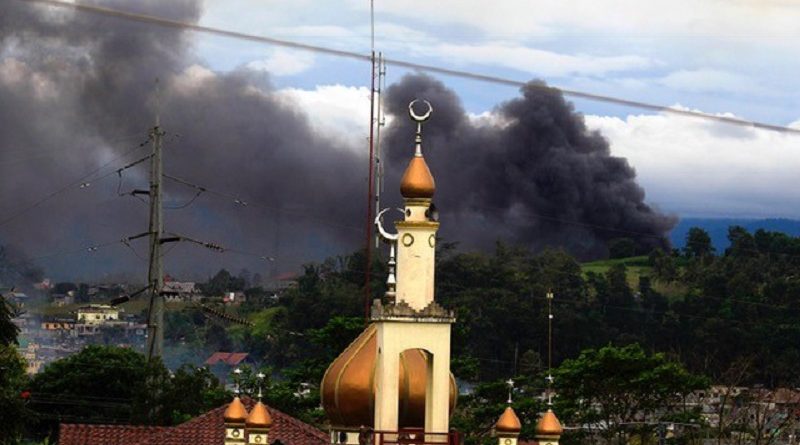 As the country’s flag was being raised in Marawi City with the singing of the national anthem for the celebration of the 119th anniversary of the Declaration of Independence (June 12) from Spanish colonialism, aerial bombing was simultaneously heard, thick black smoke was seen at a distance .

We, the Christians for National Liberation (CNL) denounces in the strongest possible terms the meddling of the American forces on the AFP military operations against a small Muslim group creating havoc in this part of Mindanao. From the dailies and television news we came to know that the Department of National Defense (DND) and the United States embassy in Manila admitted the presence of US troops in Marawi for “technical assistance” after an American P3 Orion surveillance plane was recorded flying over the besieged city. US troops were already in Marawi even before the Maute group laid siege to the city on May 23, as they had a military facility at a nearby AFP camp.

For us at CNL, this is a blatant violation of our sovereignty as the US continues its intervention in the country’s internal affairs. They feed intelligence information to the AFP through remote-control by training the AFP in aerial surveillance, targeting, electronic eavesdropping and communications. Two years ago, it is still fresh from our memory that the United States also took part in the bungled police operation in Mamasapano Maguindanao, that led to the death of 44 Special Action Force (SAF) . A week ago, four (4)armed US troops were photographed in Marawi standing beside a pickup truck, flying a drone, despite assurances by government officials, especially Lt. Gen. Carlito Galvez, commander of the armed forces Western Mindanao Command (Westmincom), that the Americans had “no boots on the ground.”

Data we gathered from fellow church people as basis for the National Interfaith Humanitarian Mission in Marawi revealed that there are at least 235,000 internally displaced persons in Lanao del Sur alone due to the all out war, including 1,536 from President Roxas North Cotabato, 1,200 Blaans in Matan-ao Davao del Sur and undetermined number of Moro civilians in Shariff Saydona, Mustapha and Mamasapano towns of Maguindanao province. A family from Brgy. Raya Madaya was trapped including a child who died of hunger while his starving family resorted to eating their blankets. The death toll from the AFP troopers to date reached 58, and 31 Maute killed, 1,613 civilians rescued, thousands wounded/injured and 45 still missing. Even our country’s journalists covering the siege reported that their vehicles were being hit by sniper fire and wayward bullets as the AFP uses rocket-propelled grenades and bombs. (source: Bureau of Public Information-ARMM Crisis Management Committee June 13, 2017)

As Christians we were saddened for taking the Catholic priest, 10 worshippers and three church workers with several churchgoers as hostage. It is also disheartening to see the city downtown area reduced to ruins. If the violent siege continue we foresee Marawi will be the next Aleppo Syria. We pity the families from Marawi and to see them scared to be hit by stray bullets and bombs, run for safety, but some were not spared, still they were hit and got killed (19) , while some were held as human shield, some (1,000) were trapped, and only a few were rescued . There is no electricity in the city, and most of the 200,000 inhabitants have fled. This situation is like a living reminder of what our fellow countrymen went through four decades ago especially those who have lived through the dark years of martial law in the ‘70s till the ‘80s.

We find it very alarming that the President who is the commander in chief does not know that his military and security officials like Department of National Defense(DND) Secretary Delfin Lorenzana, National Security Adviser Hermogenes Esperon, and Armed Forces Chief of Staff Eduardo Ano have already asked assistance from a country that he has continually hit as a hypocrite and is only looking out for its own self-interest. He professed ignorance of US military assistance for the Marawi operations, saying it was the DND which decided about the matter.

His declaration that he will just be thankful for the AFP and DND to allow US military presence in Marawi contrasted with how vigorously he denounced the alleged presence of foreigners. In doing so, he has affirmed his complicity with the intervention of a foreign military power. President Duterte’s anti-US rhetoric for an independent foreign policy, is not serious. It is also quite disturbing that he is not enforcing the ruling of The Hague Arbitral Tribunal to defend the territorial integrity of our country with the disputed South China Sea in order for the government to acquire financial aid from China, knowing that the country is a rising imperialist power.

We call on President Duterte and his administration to reject the supposed support from the US, like the war armaments used to “wipe out” the Maute and to “flatten the hills” where they are hiding , because it is always with strings attached, but also because it does not reflect well on his pronouncements for an independent foreign policy. While the people of Marawi suffer under the continuing attacks by the AFP the rest of Mindanao also suffer from the iron grip of Martial law subjecting farmers, workers, Lumads and other sectors from violations of their basic human rights and civil liberties.

CNL therefore is calling on the people of Mindanao and the entire nation to unite and demand from the Duterte government to stop committing human rights violations. We call on church people from all faith denominations and CNL forces to extend humanitarian assistance to the victims of the Marawi siege and from the other parts of Mindanao. Let us continue to struggle against the onslaught of Martial Law as it violates people’s rights and tramples our national sovereignty and genuine independence. Immediately lift Martial Law!