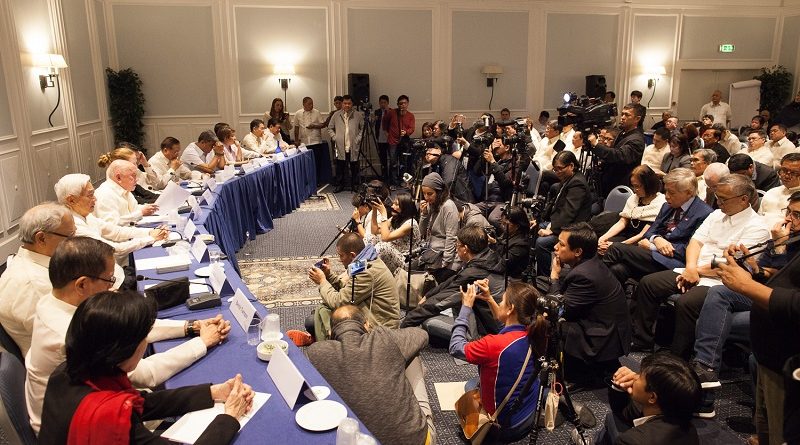 January 25, 2017
Dear countrymen in the Negotiating Panels and Delegations of the Government of the Republic of the Philippines and the National Democratic Front of the Philippines, Her Excellency Ambassador Elisabeth Slattum, special envoy to the peace process and her most able team of facilitators, esteemed guests, good afternoon.

Today, we acclaim the successful conclusion of the third round of the peace negotiations. We have reviewed and discussed the full implementation of the CARHRIHL, the first agreement in the four items of the substantive agenda. We have earnestly begun the hard work of reconciling the two parties’ draft of the comprehensive agreement on socio-economic reforms as well as the tentative draft of the agreement on political and constitutional reforms. We have signed an agreement to supplement the Operational Guidelines for the Joint Monitoring Committee (JMC) of June 2004, and the ground rules on the conduct of the formal meetings between the RWC-SER of the GRP and the NDFP that will hopefully facilitate the drafting of the CASER to meet the set deadline this year.

There is basis for forging ahead in the peace negotiations.

There are, however, outstanding issues that have yet to be resolved.

Even as the two panels were negotiating, news came in about the extrajudicial killing of a peasant and a Lumad leader, the death of an NPA Red fighter in a gunbattle initiated by the AFP in violation of its own ceasefire, and the arrest of a suspected NPA guerrilla who was accused of violating a still unrepealed martial law-era decree. The continuing militarization of the countryside must end. The people have been demanding the pullout of GRP military and paramilitary forces from their areas. They deem the NPA as their true army and are urging the Red fighters to withdraw from their unilateral ceasefire so that the latter could defend communities beleaguered by the AFP.

And of course, there is the festering issue of the continuing incarceration of 392 political prisoners.

The non-release of political prisoners again deserves particular emphasis. Among the almost 400 political prisoners are three NDFP consultants who should have been released in August last year to enable them to participate in the peace negotiations. Their continuing imprisonment is a violation of the JASIG.

Also among the detainees are more than a hundred ailing, elderly, long-held and women detainees whose release has been promised, not just once but several times by President Rodrigo Duterte and members of the GRP peace panel. The physical and psychological stresses resulting from conditions of severe congestion, lack of medical attention and inadequate food have already taken their toll on 14 political prisoners who have died in detention, 13 under the regime of Benigno Aquino III and one under the present administration.

The issue becomes even more urgent considering that many, if not all of the political detainees have been charged with common crimes in violation of the CARHRIHL and the GRP’s own jurisprudence concerning political offenses.

We have said it before and we say it again. The release of political prisoners is not simply a goodwill measure on the part of the GRP nor is it a precondition. It is a matter of redressing an injustice. It is a matter of compliance with the CARHRIHL. It is also a question of trust, of palabra de honor. The promise given in August 2016 in order to secure the indefinite extension of the unilateral ceasefire of the revolutionary movement has not materialized to date.

The political prisoners have suffered enough. We fervently hope that the release and amnesty of the political prisoners listed by the NDFP will be given the attention it merits in the course of our continuing negotiations to lay the basis for a more stable ceasefire agreement and accelerate the pace of the peace talks.

Thank you very much.