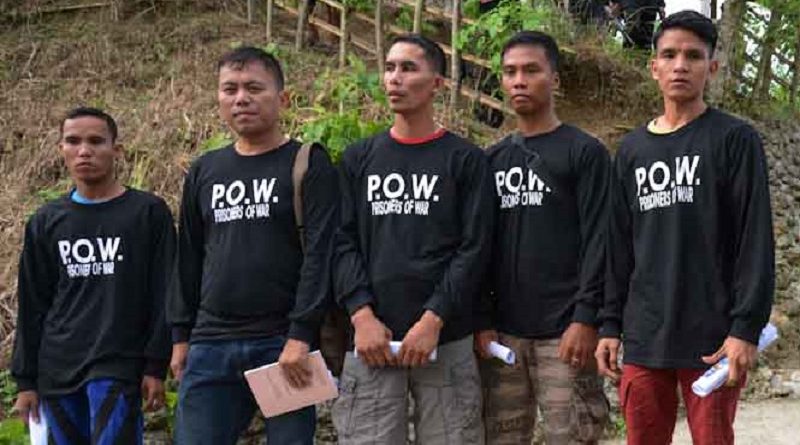 In practice, however, there is a contrast with regard to the treatment of prisoners of war between the two sides, in spite of the existence of international laws of war. NPA captives of AFP or PNP forces are tortured, charged with trumped-up cases and are considered “criminals or terrorists.” There are cases when Red fighters wounded in battle and unable to fight anymore were tortured, made to suffer and finished off without mercy. The AFP/PNP lie between their teeth when they say they are treating captive NPAs fairly, especially when they use it for propaganda.

On the other hand, AFP and PNP elements captured by the NPA are humanely and fairly treated as prisoners of war. This is mandated by the Basic Rules of the NPA, especially in its policies of discipline enshrined in the Three Basic Rules of Discipline, to wit: 1) Follow the command at all times; 2)Do not steal even a needle or thread from the people; 3) Turn-over all confiscated items to the organization. And the Eight Points to Remember: 1) Be respectful when you speak; 2) Correctly pay for everything bought; 3) Return all that is borrowed; 4) Compensate every damage; 5) Do not hurt or utter profanities at people; 6) Do not damage the crops of the people; 7) Do not exploit women; and 8) Do not hurt the captives.

The NPA also guarantees the protection of the welfare and human rights of the POWs in strict compliance to the Comprehensive Agreement on Respect for Human Rights and International Humanitarian Law (CARHRIHL) and international protocols of war in relation to the fair treatment of prisoners of war.

Within the few months the 16 POWs were under the custody of the NPA-Agusan del Sur, the safety of the POWs was ensured against the destructive military operations of the AFP. These military operations completely disregarded the welfare of the POWs as well as the people residing near and within the area. The AFP recklessly launched shelling, aerial strafing and bombing on areas near farms and communities. During this time, Scout Ranger Philippine Army forces perpetrated the massacre of Lumad peasants tending their abaca farms in the hinterlands of San Agustin, Surigao del Sur, killing two civilians and arresting two others. There were also cases of extra-judicial killings in Bayugan, Agusan del Sur and in Butuan City perpetrated by AFP agents.

Despite these however, the NPA-NEMR is appreciative towards GRP officials in responding positively to the request and clamor of the families of the POWs, of the Third Party Facilitators and other peace advocates in order to expedite the release of the POWs. This resulted in creating the condition for an orderly and safe release of the POWs, albeit implemented in a series of three, due to prevailing circumstances.

The NPA-NEMR is also cognizant of the AFP’s effort to halt its military operation during this period in order to ensure the safety of the POWs as well as to all those who attended the release. This bespeaks of taking the humanitarian consideration for the benefit of all.

In truth, we do not want war but we are under conditions that necessitate war because society is divided into the exploiter on one hand and the exploited on the other. Thus, war is the highest form of struggle necessary to resolve the contradiction between classes, nations, states or political groups reaching a certain level of conflict. This is contradiction emanating from the economic interest of the various groups or side. For instance, peasants, on one hand, aspire for genuine agrarian reform, however, on the other, landlords continue to grab and accumulate large tracts of land.

There two kinds of war. First is a just war, which include all progressive wars and participated in by the people. Revolutionary war is a war of this kind, a war being advanced by the New People’s Army and the exploited and oppressed peoples. The second kind is the unjust war, a war that hinders genuine development, one that is rejected and opposed by the people. Imperialist wars of aggression and interventions belong to this kind, as well as the all-out war/Oplan Kapayapaan launched by the AFP against the Filipino people.

In the civil war in the Philippines, the CPP-NPA-NDFP struggles for national sovereignty, land reform, democracy against fascism and national industrialization to fulfil the main aspirations of the Filipino people. It strongly advances the people’s war to totally destroy imperialism, feudalism and bureaucrat capitalism which impedes the socio-economic development of the country.

Thus, in order to examine and solve the root causes of civil war in the Philippines, another solution is peace negotiations. We hope that the release of the POWs will be a basis for the sincere resumption of equitable peace talks between the GRP and the NDFP which will focus on the direct solution of the national problems of the Filipino people.