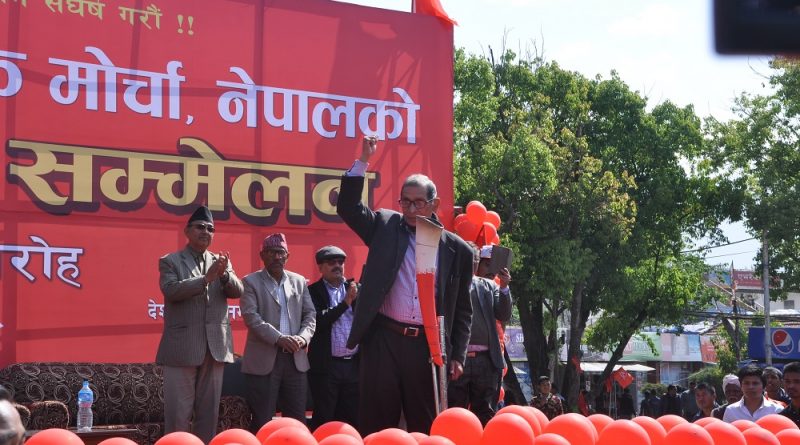 April 7, 2019 . Kathmandu: The General Secretary of the CPN (Revolutionary Maoist), Mohan Vaidya ‘Kiran’, addressing the inaugural ceremony, organized on the occasion of the 29th historical Mass Movement Day, of Patriotic People’s Democratic Front, Nepal, a revolutionary front led by the party, has said that the revolutionaries once dare to unitedly raise arms against the state power they can overturn it. 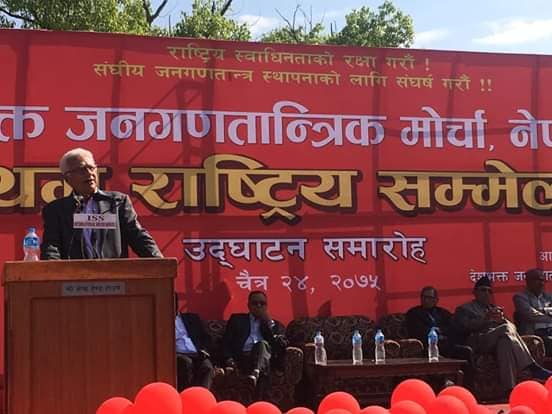 Addressing a huge mass meeting organized at Bhrikutimandap Kathmandu on Sunday, the General secretary Kiran has claimed that not only the two-third majority government led by Oli but the old state power being maintained ever since the Rana regime can be overturned when the revolutionary communists, patriotic and democratic forces wage struggle in a unified way.

General Secretary Kiran said, “Now is the time to carry out mass movement and street struggles but arms should be raised when necessary. It is people’s right to take up arms to establish their right and entertain justice. Once people dare to raise arms, then the state power can be toppled.”

Discussing that the people’s war and mass movements waged so far had failed because of betrayal on the part of leadership, he clarified that their party is attempting to go ahead by learning positive and negative lessons gained in the past.

Conveying his best wishes to the conference of PPRF, Nepal, comrade Kiran said, “May this conference succeed to adopt correct political resolution and constitution, elect an adept leadership team, raise forceful voice in favour of national independence, people’s democracy and people’s livelihood, open a new front of movement by uniting oppressed classes and the masses and raise forceful struggle for the seizure of power.” Besides, he laid stress on “Any talk other than state power is worthless.”

Saying that the present government is not a communist government but the government that defames the communists, that it represents the comprador, bureaucratic capitalists and the feudal class and that it protects the interest of the imperialist and expansionist marauders, Kiran asserted, “To chant a slogan of ‘prosperous Nepal and happy Nepali’ by selling the human and natural resources to the foreign robbers is to make people fool. Prosperous Nepal and happy Nepali is not possible form this government.” He added, “The resolution of the problems related to national independence, democracy and people’s livelihood is impossible from this state and the government, it needs an alternative force, which we are. Here the term we means revolutionary Maoist, PPRF, other revolutionary and the patriotic forces. 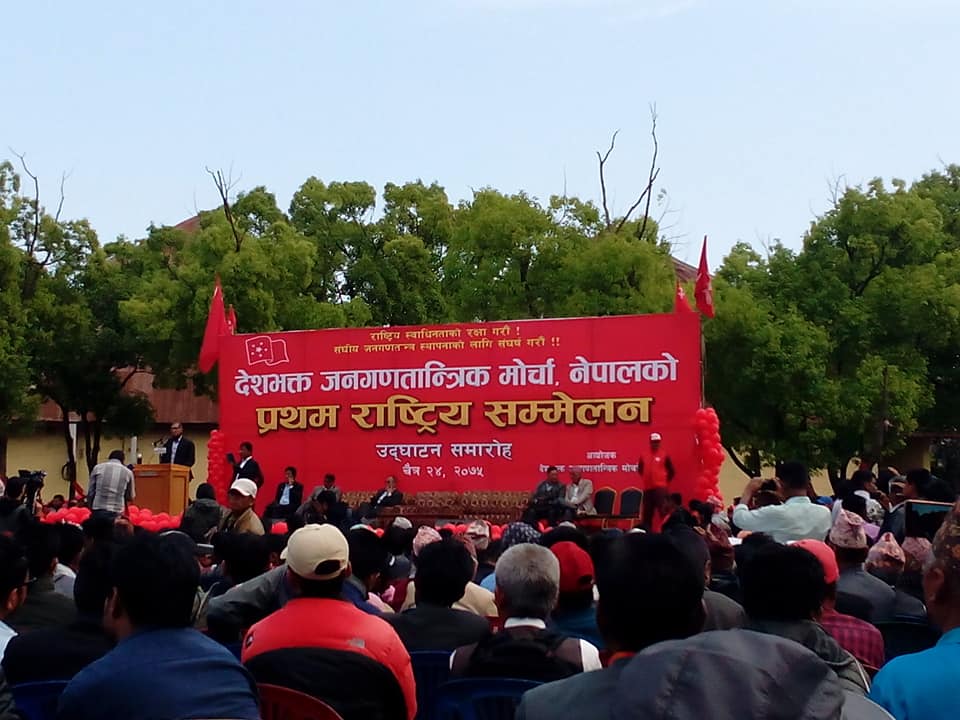 “The communist revolutionaries must be clear on class and national aspects of the social contradictions and the party of the proletariat must lead both the class struggle and the national liberation movement simultaneously. Only by uniting the oppressed classes and the oppressed masses can the proletariat win this battle. It is and was the strength of the ten years long people’s war, as well.”

Clarifying that his party was working hard to bring the entire revolutionary communist forces into a single fold, GS Kiran said that a meaningful debate is necessary with an open mind. He said, “We have worked hard for party unity. Comrades have a trend that they don’t listen to what others say. We must take lesson from history; we must unify the truly revolutionary forces. It is wrong to understand that party unity must not be done till the entire differences are fully resolved. The party is a unity and struggle of opposites. Unity should be made once there is unity in the fundamental questions of principle, the rests can be resolved by conducting forums of debate on the issues of differences. I call upon the revolutionary comrades including comrade Biplab, comrade Kirati and comrade Ahuti to come forward for unity. I call upon comrade Mohan Bikram too not to prepare a separate hotchpotch. Let all of us take initiative for unity. We are serious about it.” He added, “The opportunists have already united; now the revolutionaries too must unite. Only an idle talk of revolution is worthless for a communist.”

Chairing the inaugural meeting, CP Gajurel the Chairman of PPRF, Nepal said that the battle for Federal People’s Republic has begun. The mass Movement day 29 years before had brought the Panchayat System to an end in Nepal and we declare the battle for Federal People’s Democracy has begun today from this very historic day. Laying emphasis on the fact that merely correct ideology and politics is not sufficient to bring about a change and violence is indispensible for it, Gajurel also appealed the masses to remain prepared for struggle because the time has come to seek alternative not only for the Oli-government but for the out-dated parliamentarian system as well.

Expressing well wishes for the conference, CP Mainali, the General Secretary of the CPN (ML) said that New Democratic Revolution has not yet been accomplished in Nepal, laid emphasis on the need to sort out correct policy based on the analysis of the geo-political situation of Nepal.

In the same manner, expressing solidarity to the programmes of struggle the PPRF has put forward, Gopal Kirati, the Chairman of the CPN (Maoist Centre) laid emphasis on the unity among revolutionaries.

The coordinator of the scientific socialist party, Bishwabhakta Dulal ‘Ahuti’ emphasizing on the need to launch a serious debate on how the communist movement can be propelled forward said that Comrade Kiran must provide leadership for such debate.

The spokesperson of the CPN (Masal), Ram Prasad Puri stressed on whether or not the time has come to make People’s Democracy a tactical programme should be debated.

The secretariat member of the communist Party of Nepal emphasized that there is no any alternative left other than unitedly fighting against the present state and the system.

The artists of Samana Cultural Family had presented revolutionary songs and dances in between the speeches of good wishes presented by different leaders. The closed session, which will go for two days, will begin from tomorrow morning.