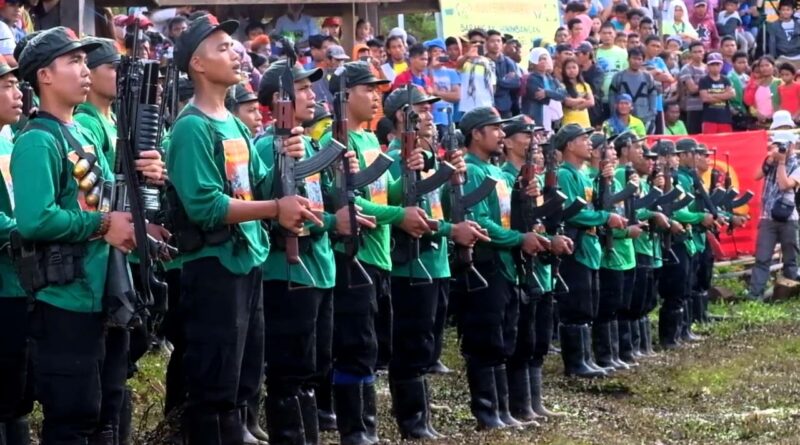 The revolutionary movement in Southern Mindanao, being headed by the Communist Party of the Philippines, defended by the New People’s Army, and loved and supported by hundreds of thousands of organized toiling masses, is persevering and thriving in the face of temporary setbacks and heightened and relentless military campaign by the US-Duterte regime. By all accounts, it is on the brink of advance, and nowhere near collapsing.

The masses are not the least bit surprised by the recent flurry of pompous pronouncements by the AFP’s troll of a propaganda machine regarding the state of the revolutionary movement in the region. Especially at a time when the US-Duterte regime and its vile progeny NTF-ELCAC are being bombarded left and right by condemnation of their fascism and blatant corruption, the AFP finds itself in a precarious situation to make mountains out of mole hills.

Since the formation of the Eastern Mindanao Command in 2006, the AFP has always considered Southern Mindanao a priority target of its most heinous counter-insurgency campaign, erroneously crediting it the “epicenter” of the Philippine’s revolutionary armed resistance. It is no revelation then that in the eventide of the US-Duterte regime, with self-imposed deadlines falling short year in and out, the AFP scrambles to claim victory over the resilient revolutionary movement, making do with rehashed pronouncements that have been debunked and proven futile many times over.

Similar grand doomsday declarations of the region’s revolutionary movement have been blabbered on in the past by the Eastern Mindanao Command. At the height of its gruesome fascist attacks against the masses during Gloria Arroyo’s Oplan Bantay Laya 1 and 2, the AFP conjectured the armed revolution’s demise in Southern Mindanao was nigh. In its more than six-year run in the region, OBL 1 and 2 only resulted in such heinous crimes against the masses such as the Maco Four massacre and atrocious war crimes such as the Kauswagan Dos massacre.

During Benigno Aquino III’s equally atrocious Oplan Bayanihan between 2010 to 2016, the AFP made same declarations, claiming to have purportedly reduced the NPA’s armed capability to “inconsequentiality,” only to be caught unawares by high-profile tactical offensives that served justice to the cause of the masses such as the simultaneous Lapanday raids. The Aquino III regime itself was rocked by waves of huge protests over its ineptitude in handling the aftermath of disasters such as Bagyong Pablo and its culpability over the massacre of Lumad and peasants in Kidapawan.

In 2015, the AFP’s top brass was also quick to particularly predict the NPA’s strategic weakening in the region following their troops’ murder of hors de combat Ka Parago, commander of the Pulang Bagani Battalion. Suffice it to say that not only did they eat their words, but the Red commander’s death only emboldened more peasant and Lumad youths to take the cudgel of leading the armed revolutionary resistance in Southern Mindanao. It must vex them to assume how the present setbacks in the revolutionary movement in the region can be any different.

And as actions speak louder than words, what of the continued deployment of more than 18 AFP battalions in focused military operations in the hinterlands of the region it claims on the “brink of collapse?” By its own estimation, it is evident that even to the AFP itself, its own declaration is a hard sell.

The cold fact is that these declarations do not attest to the downfall of Southern Mindanao’s revolutionary movement but to the AFP’s fevered need to save face amid its barefaced corruption, wanton and exorbitant military spending, and to justify its gargantuan budget, especially NTF-ELCAC’s shameless bid to raid P28.1B more from public coffers. Ever the fabricator of fake news, the AFP yet again proves that it is never above wasting precious taxpayers’ money for press junkets when ordinary Filipinos are barely scraping by in the face of economic decline and the Covid-19 public health crisis.

In its giddy attempt to score points, if only superficially, Duterte and the moneyed generals of EastMinComm carry on turning their blood-stained cheeks to the one constant reality that crumbles their highfalutin assertions to the ground: the masses of workers, peasants, Lumad, urban poor, and petty bourgeois in the region continue to suffer under inhuman conditions, their socio-economic and political rights ridden roughshod by the reactionary regime’s savage fascism, anti-people policies, criminal negligence amidst disasters and crises and corruption.

Around the region, Duterte failed miserably to implement genuine land reform and provide production assistance to farmers and farmworkers, opting instead to displace peasants from their land and Build, Build, Build his way in ensuring infrastructure for banana plantations especially in Davao de Oro and Davao Oriental, and large-scale mining in Davao del Norte. Majority of workers in Davao City are burdened to make ends meet with barely livable wages, as they struggle to maintain job security in the face of neoliberal flexible labor. Sara Duterte remains a bane to urban poor communities in the city, displacing residents with fake fire incidents or else demolishing them to make way for six-lane roads and fascist gentrification. State armed forces are victimizing the masses in a manner never before seen since the dark ages of Marcosian martial law, pummeling communities with intense military operations or else aerial bombardment. AFP and PNP forces and their paramilitaries casually snuff out with impunity the lives of the best sons and daughters of the masses, theirs leaders, lawyers, teachers, activists and sympathizers. The Covid-19 pandemic and other previous disasters that hit the masses Southern Mindanao only exacerbated their abject conditions, and they are enraged by the callousness and corruption of the Duterte regime.

These are the ever-present facets of Duterte’s semi-colonial and semi-feudal state that continue to inspire Communists, revolutionaries and Red fighters to persevere in the people’s war and thereby maintains the bottomless well of active participation by and support of the masses.

The AFP must make no mistake: the revolutionary forces of Southern Mindanao have nothing to prove to the enemy. Resilience and flexibility to maintain initiative amid intense military campaigns of encirclement and suppression and setbacks in the face of temporary losses are respective hallmarks and inevitability in the course of the people’s protracted war, realities that tempered Red fighters and commanders, the masses, their leaders and the Communist leadership are very much aware of. Revolutionary optimism, hard struggle and the ever-enduring principle of rectification shall doubtless tide the national democratic revolution in the region over to achieve stronger unity and in time hit higher heights way beyond Duterte’s reign of tyranny comes to pass and succeeding reactionary regimes take its rotten place.

As in the past, the AFP’s self-congratulatory declarations of the demise of the revolutionary movement in Southern Mindanao is only true to character, a method to madness that the masses of workers, peasants and Lumad around the region have time and again thoroughly proven laughable as they are illusory.