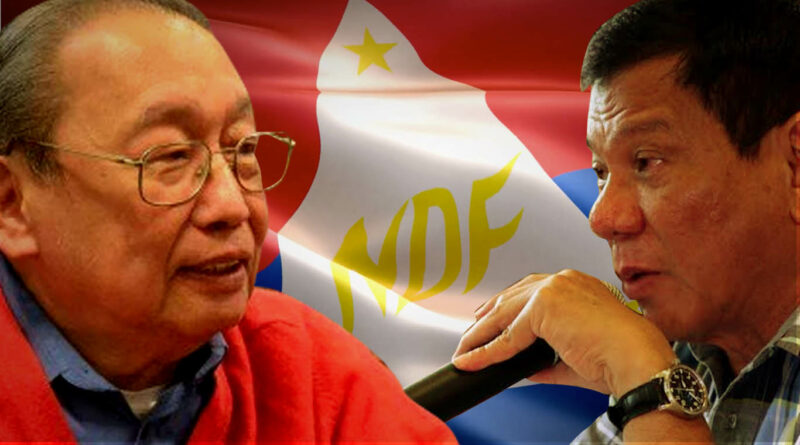 In 1986, when President Corazon Aquino offered peace talks with the NDFP, the NDFP agreed to hold peace talks in Metro Manila in consideration for the health condition of former Senator Jose Diokno who was officially appointed to head the GRP peace negotiations. Negotiators on the NDFP side were Satur Ocampo, Antonio Zumel Carolina Malay.

In violation of agreements of security for participants of both sides, the GRP put the NDFP panelists, consultants and security personnel under close surveillance. The GRP Generals boasted that their intelligence stocks rose by 25%. Names, pictures, addresses, telephone numbers and other details were illegally gathered by the military.

The agenda of the talks could not proceed to substantial points. The focus of the GRP was on ceasefire and gathering intelligence. Diokno’s proposal of Peace and Justice, Jobs and Freedom could not get off the ground.

The big blow to talks came when thousands of peasants marching peacefully to Malacanang, calling for land reform, were fired upon by the military and police, killing 13 peasants and wounding hundreds. In the face of this massacre, the NDFP decided to terminate the peace negotiations. Hundreds of NDFP members were subject to attack, while the NDFP negotiators went underground.

Some time later, GRP President Aquino “unsheathed the sword of war” against the New People’s Army.

This was a bitter lesson. Peace negotiations held in the Philippines are subject to grave danger.

In 1992, GRP President Fidel Ramos sent Congressman Jose Yap to negotiate with the NDFP in the Netherlands. The NDFP authorized Luis Jalandoni to meet with Congressman Yap. On August 31, 1992, they met to discuss their positions.

On September 1, 1992, the GRP and NDFP signed The Hague Joint Declaration, an agreement of reciprocity and parity. It declared that neither party may impose surrender or capitulation on the other. Furthermore, this agreement established that the agenda of the talks would be in accord with national sovereignty, democracy and human rights. It declared also that the substantive agenda would be on human rights and international humanitarian law, social and economic reforms, political and constitutional reforms, and end of hostilities and disposition of forces.

The document, Comprehensive Agreement on Respect for Human Rights and International Humanitarian Law (CARHRIHL) was signed on 16 March 1998. The Agreement was formally approved by the Principals of both parties.

Another agreement, The Joint Agreement of the GRP and the NDFP on Safety and Immunity Guarantees was signed on February 24, 1995. In this agreement, both sides agreed that formal talks be held in a neutral foreign venue. This meant it would not be held in the Philippines.

These and other peace agreements render totally untenable Duterte’s demand that peace talks be held in the Philippines.

These facts clearly prove that Duterte is ignorant of the basic agreements of the GRP-NDFP peace negotiations. Or he simply sets them aside, or pays no attention to them. He must be condemned for his denial of the facts.

Duterte is also condemnable for demanding that the asylum granted to Prof. Sison be withdrawn. It was the Council of State (Raad van State) of The Netherlands, the highest Aministrative Court in the country, which officially declared that Jose Maria Sison is protected by the Human Rights Convention and the European Human Rights Agreement. Therefore, he may not be extradited to the Philippines or any other place where his rights may be put in danger. He has the right not to be subjected to any danger of torture or any other inhuman act.

On the contrary, Duterte is accused of numerous human rights violations against peasants, workers, indigenous people, youth, women and many more. The International Criminal Court (ICC) has declared that Duterte can be accused of crimes against humanity and torture. More is expected to come out when the official ICC investigation is initiated as called for by ICC Prosecutor Bensouda. Moreover, international agencies such as INVESTIGATE PH have issued detailed documentation on the crimes of President Duterte against the Filipino people.