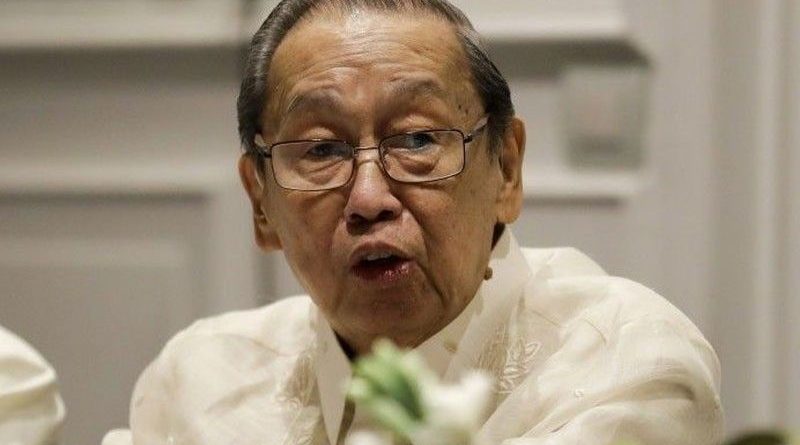 May I ask you the following questions:

1) Duterte has formed an Inter-Agency Task Force to fight the coronavirus and most of its members are generals whom he had appointed Armed Forces chief-of-staff and then retired. In a number of speeches inside military camps and a military hospital, he has urged the military to take over and form a junta in case anything should happen to him or they simply want him out.

Can this IATF body be turned into a similar one like Ferdinand Marcos’ Rolex 12 which planned and operationalized the imposition of Martial Law?

JMS: The Inter-Agency Task Force of Duterte is quite similar to the Rolex 12 of Marcos which planned and operationalized the imposition of Martial Law. It consists of Duterte loyalists who owe to their commander-in-chief their previous promotions in the military service and opportunities for corruption in and out of the military service. The IATF is also a coordinate of the National Task Force-ELCAC which was earlier formed under Executive Order 70 to militarise the government and establish a fascist state.

Duterte is using the IATF to undertake a de facto martial law regime in the name of fighting the corona virus and to prepare the way for the formal declaration of martial law and the full imposition of a Marcos-type fascist dictatorship. There is also an added threat by Duterte that in case he dies because of his physical and mental illnesses or because of assassination by any of his many political enemies and rivals in the drug business the IATF becomes a military junta to rule the Philippines beyond the bounds of the 1987 Constitution.

2) Duterte has a draconian law in the works –a revised Human Security Act that could stamp down on political dissent, surveil and arrest dissenters for longer periods. On top of this, he is still trying to change the 1987 Constitution. Today, he controls Congress through his political allies and is packing the Supreme Court with his appointees. Given all these, do you think he can do a Marcos?

JMS: Duterte can do a Marcos by imposing a full fascist dictatorship on the Filipino people. Aside from having turned the military and police forces as his instruments for tyranny, he can change the 1987 Constitution to make himself fully a fascist dictator. For the purpose, he can use his supermajorities in the Lower House and Senate which he obtained through pork barrel corruption and rigging of the Comelec count in 2019. He can also use the Supreme Court to further legitimize his illegal and immoral acts, as previously done in the junking of the plunder cases of his allies and the removal of the sitting Supreme Court justice,

As I said previously, there is already a de facto martial law regime in the Philippines. Executive Order No. 70 has set the policy for such a regime under the pretext of anti-communism. It is being buttressed by a revised Human Security Act that can suppress by military force political dissent and can surveil, harass, arrest without judicial warrant and detain dissenters for longer periods. Duterte has already used both houses of Congress to obtain emergency powers and use public funds as he pleases under the pretext of fighting the Covid-19 contagion.

There are preparations for changing the 1987 Constitution to pave the way for the full establishment of a fascist dictatorship as the main objective in conjunction with such objectives as to establish a pseudo-federal system of government under a highly centralized fascist dictatorship and favor foreign investors with the right to have 100 per cent ownership of land and enterprises engaged in natural-resource exploitation, public utilities, media and other types of businesses previously reserved to Filipino citizens 100 per cent or at least to the extent of 60 per cent.

3) What is the biggest difference between Duterte and Marcos?

JMS: In terms of personal characteristics, the biggest difference between Duterte and Marcos is that the current president is already old and sickly both physically and mentally. When Marcos set out to become a fascist dictator, he was much younger, more agile physically and mentally and more articulate in deceptive rhetoric about “saving the republic and building a new society”. Duterte comes out as merely a crazy thug and a farcical copy of Marcos.

In terms of crisis conditions to exploit in order to realize fascist dictatorship, Marcos still had plenty of allowance to take foreign loans, raising the foreign debt from USD 500 million in 1965 to more than USD 28 billion in 1986 and he was faced with a still small armed revolutionary movement that had only 9 automatic rifles in 1969 and only 6,100 automatic rifles in 1986. Now, Duterte is hampered by a more lopsided underdeveloped economy, by far bigger trade and budgetary deficits and far bigger local and foreign public debt, now aggravated by the deleterious consequences of the Covid-19 crisis.

And of course, Duterte is faced with an armed revolutionary movement of the people with plenty of experience in frustrating strategic enemy campaigns of military suppression, a people’s army with around 10,000 fighters and people’s militia with hundreds of thousands of members in more than 110 guerrilla fronts in 74 out of 81 provinces, mass organizations of different sectors with millions of members and local organs of political power that constitute the people’s democratic government.
I have been informed by AFP insiders that Duterte and his generals are having nightmares over the potential of the NPA guerrilla fronts in launching tactical offensives even only at the rate of three to five offensives per guerrilla front per month as the socio-economic and political crisis will further deepen and worsen.

4) Do you think he will declare Martial Law or just continue threatening to?

JMS: It is in the personal and political character of Duterte to make threats of formally declaring martial law and butchering many people. But I am not absolutely sure that he will carry out his threats. As described by Waldy Carbonell and Homobono Adaza, Duterte is an extreme coward in physical and moral terms but who is always trying hard to show off that he is a killer and a strong man. Most of the time, he merely orders his armed minions to butcher the victims who are already hogtied, as in the mass murder of 30,000 drug suspects. And according to himself, he himself as mayor of Davao City killed some individuals extrajudicially, while he was in the secure company of his armed minions, supposedly for the purpose of inspiring them to kill people upon his orders.

What can deter or prevent Duterte from formally declaring martial law and establishing a fascist dictatorship is a combination of various organized forces similar to those that concurred and moved towards the overthrow of Marcos in the years following the assassination of Ninoy Aquino, 1983 to 1986. The broad masses of the people keep on rising in protest mass actions until they inspire the anti-Duterte groups within the armed forces and police to junk Duterte. The churches already so much abused and insulted by the Duterte regime can support and encourage the broad masses of the people and the various anti-Duterte groups to fight for democracy and human rights. Duterte will be in deeper shit if he exposes himself as seeking or enjoying the protection of any foreign power, the US or China or both, in order to keep him in power against the popular demand for his ouster.

For Marcos to be overthrown, the New People’s Army did not have to be in Metro Manila in any significant number. But with their relatively smaller size then, it could carry out many tactical offensives which pressured the Marcos regime and which persuaded the US to junk Marcos as a liability prejudicial to the persistence of the pro-US Philippine ruling system. Now, the NPA has a far bigger and more widespread strength than ever before. There are estimates that in due time soon the NPA can inflict serious blows to the Duterte regime in the countryside, whether to help discourage the regime from the project of fascist dictatorship or become the main fighting force against an already installed full fascist dictatorship.