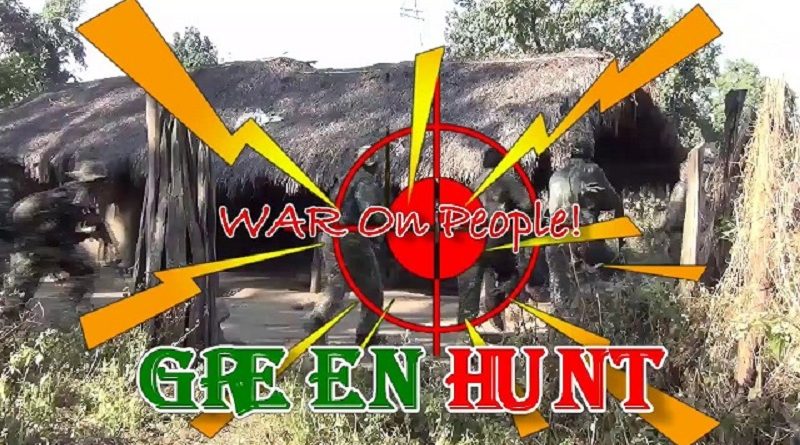 In a comparative analysis of more than two years, with genocides and with the counterinsurgency strategy called ʹHearts and Mindsʹ which was applied in Malaysia, Indonesia, Guatemala, El Salvador or Peru; the study reveals the genocidal practices that this counterinsurgency strategy used in the past and in the present in the case of India with the Operation ʹGreen Huntʹ.

In the genocide studies carried out so far certain social practices can be found, with very similar procedures in all cases, for example: the planning by the State of the extermination of a certain human group and the use by that State of a dehumanizing language to raise awareness and legitimize socially before the population that this group must be exterminated by the State.

Simultaneously, it proceeds to the detention and selective physical extermination of social and political leaders who can create another type of political discourse against the measures that the State intends to take. It also begins the internment of the group to be exterminated in concentration camps where they regulate all aspects of their life, such as birth, diet or health.

Finally, the physical extermination of the human group takes place, in this case women and children as responsibles of the continuity of the groupʹs life are the first to suffer all kinds of atrocities, from sterilization and medical experimentation, to rape, to conclude with physical extermination.

Likewise there is an economic interest in any genocide, either for the defence of the status of the Bourgeois State to maintain its exploitative relationships with the working classes or to wrest land, natural resources or property. The very act of genocide produces certain economy for the State and new social relationships.

The common actions in all the genocides and in the strategy of counterinsurgency ʹHearts and Mindsʹ, which are repeated systematically, are:

Selective executions in which the population was killed individually and collectively. Extra-legal execution attempt resulting in injuries. Cruel, inhuman or degrading treatment. Selective and indiscriminate massacres. Kidnapping. Destruction and burning of villages. Individual and collective sexual violations of women. Interrogations under torture to persons captured or suspected of collaborating with the guerrillas. Control and encirclement of displaced communities preventing access to food and medicines essential for the survival of populations. Concentration of ethnic groups and civil population in camps managed by the government or paramilitary groups. Tracking and fencing operations in order to identify refuge areas in order to capture and or execute the population.

The Convention on the Prevention and Punishment of the Crime of Genocide (CPPCG) says: Genocide means any of the acts perpetrated with the intention of destroying, in whole or in part, a national, ethnic, racial or religious group.

In the case of Operation “Green Hunt” developed by the Indian Government:

B) Serious injury to the physical or mental integrity of the members of the group: In this characteristic of genocide we can frame the different examples of sexual violence, such as the “Naxalita test” or the sexual violations against Adivasis and Dalits women.

C) Intentional submission of the group to conditions of existence that will lead to physical destruction, total or partial:
It would be the case of the 350,000 Adivasis of the State of Chhattisgarh who were forced to leave their villages and to live in the fortified camps (concentration camps) of the military and paramilitaries of the Salwa Judum, as well as the burning of villages by these or the looting of food, etc. Also the policy of expulsion of the population from the forests and from the land to proceed with the exploitation of their natural resources, which endanger the means of subsistence of the Adivasis and Dalits.

d) Measures to prevent births within the group:
In 2012 in the State of Chattisgarh approximately 7,000 women were subjected to forced operations to remove their uteri. Although for a time the Indian government excluded from the forced sterilization program for the control of the population of certain Adivasi communities due to the lack of children from these populations, in 2012 this program was again started by all the Adivasis communities.

As we have explained in relation to the use of sexual violence as a weapon of war, sexual violations are another important factor to prevent the births of children within the group.

In view of the characteristics written in this investigation, it is quite obvious that the attacks that are carry out in India against the Adivasis and Dalit peoples -both those who peacefully resist and those belonging to the Maoist armed movement- are a genocide. Itʹs obvious that ʹin partʹ some national groups in India are being eliminated with the goal of altering social relations within the nation itself.

The annihilation is not spontaneous: itʹs a systematic destruction destined to eliminate the ʹinsurgent partʹ and transform the rest of the national groups, redefining their way of being, their social relations, their destiny and their future. It is the annihilation of those who resist and practice another way of carry out social and economic relations. It is the class war applied in its superior phase, genocide.

For this reason, the only alternative for the survival of Adivasis, Dalits and Naxalite militants who believe in another society is a radical change of the semi-feudal and semi-colonial society of India; as well as international support and solidarity to end this massacre and to advance in its goal of building a new society without classes, castes, racism or patriarchy.

(Adolfo Naya is a social anthropologist and activist. Author of the book: Operation ʹGreen Huntʹ: The genocidal social practices of the counterinsurgency strategy ʹHearts and Mindsʹ, 2017 (Original in Galician language))