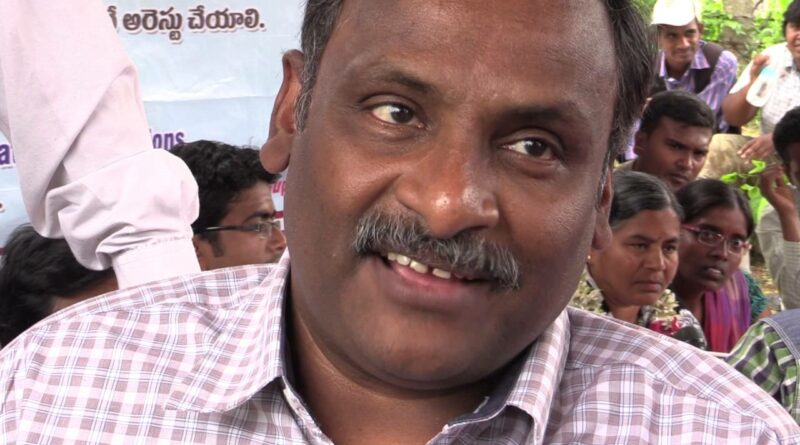 February 18, 2021: Members of human rights groups, civil society organizations, and international academic associations on Wednesday demanded the immediate release of Political Prisoner Dr GN Saibaba on a medical parole, citing his grave health condition. The signatories urged authorities to allow him to be treated with the care that is required for a coronavirus patient with several comorbidities.

Saibaba, a wheelchair-bound, 90% physically disabled scholar-activist was sentenced to life for his alleged connections with the CPI (Maoist) in 2017, and has been in the Nagpur Central Jail since. On February 13, he tested positive for the coronavirus.

In a public appeal that has been endorsed by 18 international organizations, human rights groups and diasporic collectives, the signatories said this was an “extremely dangerous development”, given that Dr Saibaba already suffers from serious health problems, including heart and kidney issues. The statement said his life was at risk.

The signatories sought that he be allowed to seek treatment at a private hospital in Nagpur, which is equipped to provide him with proper coronavirus treatment and accommodate his disability. “Professor Saibaba suffers from paralysis due to post-polio syndrome, a condition which requires assistance with basic hygiene tasks and mobility,” they said. “When forced to go into quarantine, he will suffer not only from the disease itself, but also from the lack of help with his daily needs.”

The statement added that over the past five years, the government has consistently ignored and rejected appeals and petitions demanding that Dr Saibaba be provided with medical care appropriate to his ailments or that he be allowed medical bail to seek treatment.

In December, his lawyer was not permitted to hand over various essentials brought for him. “In a particularly cruel, arbitrary, and unnecessary act, the government refused to grant his request to visit his mother on her deathbed,” the statement noted. “She died in 2020, unable to see her son as per her last wishes.”

The statement also said that his wife Vasantha Kumari noticed during her last phone call with Dr Saibaba that he could speak only with “great difficulty”. “We could make out he was breathless, his throat was sore,” it quoted Kumari as saying.

The signatories also criticised the authorities’ decision to treat Dr Saibabi in his cell by a prison doctor. “The Government Medical College and Hospital is overwhelmed with COVID-19 patients, and does not have facilities to accommodate patients in wheelchairs, such as Professor Saibaba,” they said.

Moreover, the statement said that there was a reason to believe that the treatment provided by the prison doctor is insufficient, given that “prison authorities have repeatedly denied Professor Saibaba adequate medical care and allowed his health problems to worsen over the years”.

Groups that have endorsed the statement include the International Solidarity for Academic Freedom in India, Scholars at Risk, PEN America, Free Saibaba Coalition – US, Boston South Asian Coalition and the Humanism Project.