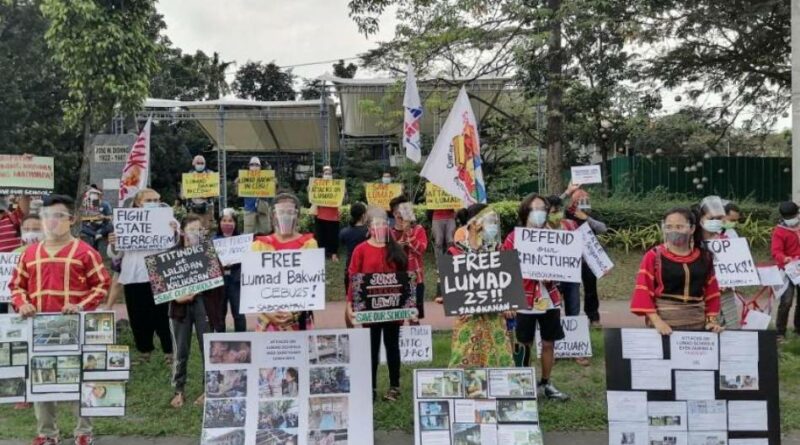 Revolutionary forces, especially from Lumad and peasant organizations, in Southern Mindanao strongly denounce the brazen and violent assault in the Lumad bakwit school inside the University of San Carlos Talamban campus in Cebu City by a retinue led by armed police on February 15. Police forces arrested and continue to detain 22 students, two teachers and two elders. We join the resounding call for their immediate and unconditional release and for the perpetrators of the attack to be held responsible.

Photos and video footages of the raid against unarmed civilians inside an academic compound, which the reactionary police ironically called a “rescue operation,” show in bitter detail the sheer use of gratuitous force, made more harrowing by the tormenting screams of children being dragged out of the classrooms that for almost a year became a safe refuge for them.

The assault on the sanctuary of Lumad students, their teachers and elders, under deceptive and outrightly malicious pretext is a brazen display of the Duterte regime’s impunity. Not merely a show of contempt for its own reactionary rule of law, the assault is evidently the Duterte regime in full flexing of fascist force, meant to send a chilling caution to those who dare defy it: we can do this with no fear of repercussion or accountability.

To be sure, the peasants and Lumad of Southern Mindanao are no longer surprised by this bold-faced act of terrorism perpetrated by armed state forces against children and the people who protect them. In UCCP Haran in Davao City where hundreds of Lumad were forced to seek refuge since 2016 when Duterte came to power, AFP and PNP forces, aided by bellicose reactionary officials like Nancy Catamco and Paolo Duterte, have tried multiple times to mount attacks against the Lumad’s sanctuary and force them to return to their ancestral domains despite relentless militarization and forced paramilitary conscription.

This vile attack only proves that under Duterte’s tyranny, neither children nor the academic institutions that seek to educate and protect them are safe from the fascism that beleaguer the entire country. Safety nets such as the UP-DND accord, however tenuous it may prove to be, must therefore be defended and advocated for the protection of schools and universities from the fascist abuses of the AFP and the PNP.

The Lumad of Southern Mindanao and the entire revolutionary movement express their gratitude to the religious and academic sectors that continue to support the struggle of the Lumad. We urge them to remain steadfast and stand for truth and justice, as it is only to be expected that the Duterte regime will heighten pressure against them to break their solidarity with the Lumad and their struggle.

However monstrous it may currently appear to be, the US-Duterte regime’s counterinsurgency war being presently steered to hitherto unknown fascist heights by the NTF-ELCAC is in fact self-defeating. By relentlessly launching intense militarization which breeds killings, abductions, red-tagging, and other human rights violations alongside palliative and graft-laden “development programs” but all the while refusing to address the roots of the armed struggle, this rabid fascist dictatorship only ensures the steady deluge of warm bodies who unyieldingly mount all forms of resistance and the well of NPA recruits who continue to fight tyranny until it is thoroughly defeated.