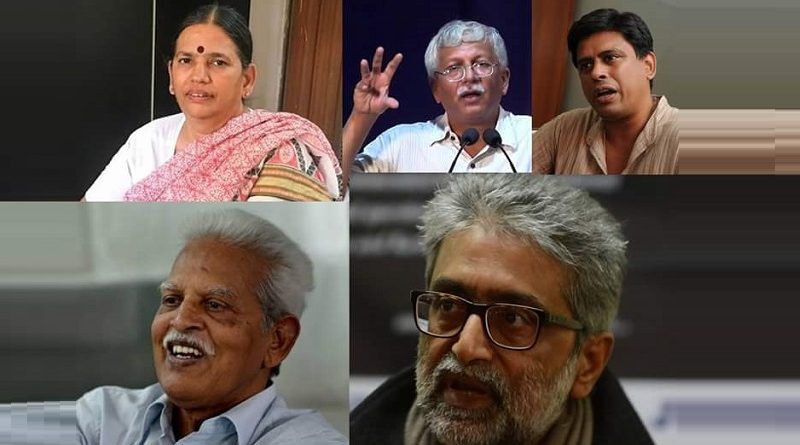 In yet another brazen act to stifle dissent, the Maharashtra Police have arrested Vernon Gonsalves, who is an Executive Member of the CRPP, and well known activists and lawyers Advocate Sudha Bharadwaj, Gautam Navlakha, Arun Ferreira, revolutionary poet Varavara Rao, and Kranti Teluka. Raids were also conducted across Goa, Jharkhand, Delhi, and Telangana in the houses of Anand Teltumbde, Father Stan Swamy, Anala, Kumaranth, Prof. Satyanarayana and many others. Right at the time when the terror plots by the rightwing Sanatan Sanstha is emerging, the bogey of assassination plot on the Prime Minister is re-invoked and these arrests and raids are carried out. More importantly, the 90 day period of judicial custody for the five activists arrested in the month of June 2018 is just about to end and the charge sheet is yet to be filed. At this time, when the police narratives are falling apart, these arrests reveal the desperation of the Maharashtra police to shut down all criticism by arrested more activists.

Today’s action by the Pune police reeks not just of diversionary tactics, but also a ploy to extend the custody of Professor Shoma Sen, Advocate Surendra Gadling, Mahesh Raut, Sudhir Dhawale, and Rona Wilson. While those who unleashed violence on Dalits in Bhima Koregaon are roaming free, Dalit and adivasi intellectuals and Human Rights Activists who have stood by them are being targeted by the state. These arrests and raids are a blatant attempt at stifling dissenting voices revealing a sinister, premeditated and politically motivated effort to malign the arrested and discredit them through branding instead of evidence. It is crucial to note that this effort at using the full might of the law is revealed in the sections of the IPC and UAPA used against the arrested. These include IPC 153A – promoting enmity between different groups of people, 505 – statements conducing public mischief, 117 – abetting commission of offence, 120B – criminal conspiracy; under UAPA 13 – unlawful activities, 16 – terrorist acts, 17 – raising funds for terrorist acts, 18 – conspiracy, 18B – recruiting persons for terrorist act, 20 – member of terrorist gang or organisation, 38 – membership of terrorist organisation, 39 – support to terrorist organisation, 40 – raising funds for terrorist organisations. The intention of the police becomes amply clear when we note that each of the arrested persons are well regarded human rights activists who have publicly worked for the rights of dalits, adivasis, minority communities, women’s rights, workers’ rights and spoken and written extensively about the policies of the state. Moreover, all of the persons targeted by the state have been steadfast and resolute in their stands for decades. These charges, none of which stand up in front of slightest of scrutiny, is meant merely to incapacitate and silence these voices by sending them to custody for extended periods of time.

The raid at the homes of Susan Abraham and Arun Ferreira and the eventual arrests of Ferreira and Vernon Gonsalves patently reveals the effort to scuttle possibility of establishing a case for the release of the five arrested in connection with Bhima Koregaon in June. Now, with the arrests of the lawyers fighting the case, the Maharashtra police are making all efforts to ensure that all those who stand with the spirit of democracy are denied all democratic rights. The efforts being made to scuttle the High Court stay on the transit remand of Gautam Navlakha and Sudha Bharadwaj is another instance where the upholders of law are willing to do anything to blatantly abuse and disregard the law. The efforts to illegally take Sudha Bharadwaj to Pune, despite the Punjab and Haryana High Court order putting a stay on the remand, clearly indicates the maliciousness of the police force. The gherao of an unprecedented number of police personnel during the arrest of Varavara Rao and the ransacking of his home is another such instance of police brutality. The search of Anand Teltumbde’s residence during his absence is patently illegal and raising concerns about the extent to which the police will go to clamp down and spread fear among people. The extended interrogation of Father Stan Swamy in Ranchi, Jharkhand, and Prof. Satyanarayana in Hyderabad while keeping them confined to their residence since early morning and denying any legal assistance is another such instance of police highhandedness.

The order for the raid and arrests, coming from Swargate Police Station in Pune, is motivated to foist false cases on democratic rights activists through fabrications and strong-arm tactics. The callous disregard for the rule of law and the fundamental rights of people by the institutions of the state reveals a stark image of a fascist Indian State. CRPP strongly condemns these raids and arrests and demands the immediate and unconditional release of all arrested in connection with the Bhima Koregaon case. Committee for the Release of Political Prisoners demands an end to all such ‘operations’ by the Maharashtra police, stands in solidarity with all such voices of democracy and is determined to fight this vicious assault on all those who dare to speak out against the violence of the state.