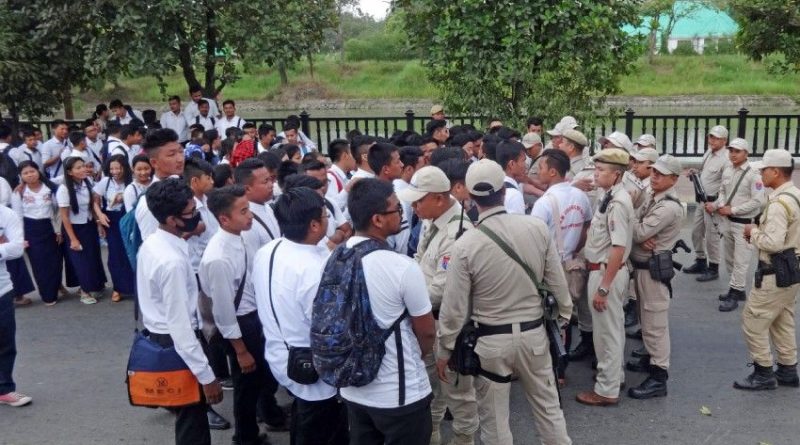 Nine students’ bodies from Nepal, Philippine, Bangladesh and other states of India including Socialist Students’ Union of Manipur (SSUM) of Manipur has expressed strong condemnation to the September 20 midnight crackdown by security personnel inside Manipur University complex.

“We strongly condemn the incident of Manipur University that happened at the midnight of 20th September where a number of Security Forces came and arrested 90 Students and 6 Professors and put them jail by using Mock Bombs and Tear-Gas Shell in Manipur University Hostels”, the joint statement said.

It added that Students of Manipur University had been suffering for completely 85 days by the Total shut down of University and students did not have the chance to have classes and even exams. For this serious matter,  a MoA (Memorandum Of Agreement) was signed in between Manipur Govt. Protestors and MHRD to bring the normalcy of the University to conduct exams and to result out the pending exam results. During this bringing up of the normal Environment in MU, the BJP Govt. of Manipur is again reviving the conflicts.

“We, the Students from aboard and from India strongly demand the immediately release of the arrested Students and Professors (associated with the Mid-Night Crack-Down) without any conditions. After the Mid-Night Crack-Down in the Manipur University campus, the BJP govt. have shut down the Internet services in Manipur. Actually this shows the Dictatorship of the BJP Govt. which they suppress the rights of the citizens.

“In order to support and help the Political Nominee of  RSS, VC Pandey, life of thousands of Students have been tortured. The normal timing of the Students’ Exam has been already 100 days late and again by this new Military Crack Down, the life of the students would loss more from before. Not only here in Manipur, with the coming of BJP Govt. in Central India, many other Universities have been attacking by RSS-BJP. In Manipur also, students’ and Teachers of Manipur University have been attacked Under the strict supervision of RSS-BJP.

The joint statement while condemning act term it as BJP-RSS against the Students’ and Teachers community. The statement also demanded immediate release of the arrested students and teachers and also those who have put in jail without any conditions.