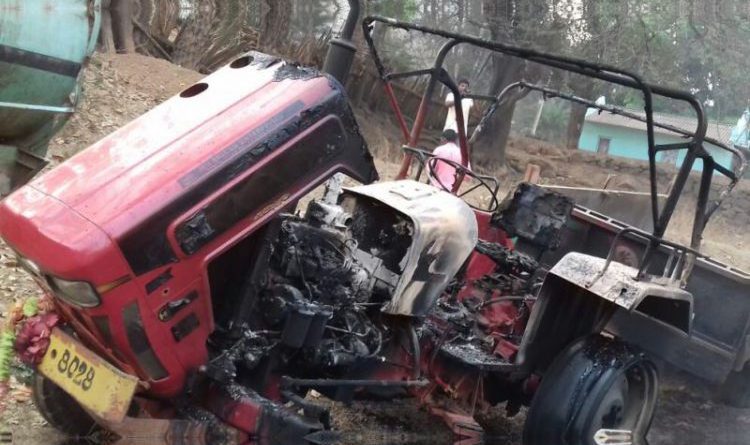 Baliguda: After a few days lull, Maoists have again made their presence felt in Kandhamal district by torching a number of vehicles after attacking a road construction camp located in Gumudumaha village under Baliguda Tehsil last night.

A group of heavily armed members of KKBN (Kalahandi-Kandhamal-Boudh-Nayagarh) Division of outlawed CPI (Maoist) group raided the construction camp set up under Pradhan Mantri Gram Sadak Yojana (PMGSY – Prime Minister’s Rural Roads Scheme) work in the village, late in the night. After attacking the staff and labourers present at the camp, they went on torching the vehicle engaged in work.

At least 3 tractors and a JCB machine were reduced to ashes after Maoists set them afire.

In a note of warning to the contractor engaged in the road construction work as well as the villagers, the red rebels left a few posters before leaving the spot.

The posters were seen with messages protesting the road construction work, dubbing those as efforts to steal mineral and forest resources from the district. Maoist also claimed that the police-public meetings held in the area recently are aimed at creating more informers against red rebels and the surrender of Narsimha Reddy alias Jampanna (55), a central committee member of the CPI (Maoist) is a mere eyewash as he had been expelled from the group.

Police have intensified combing in and around the area following the attack.