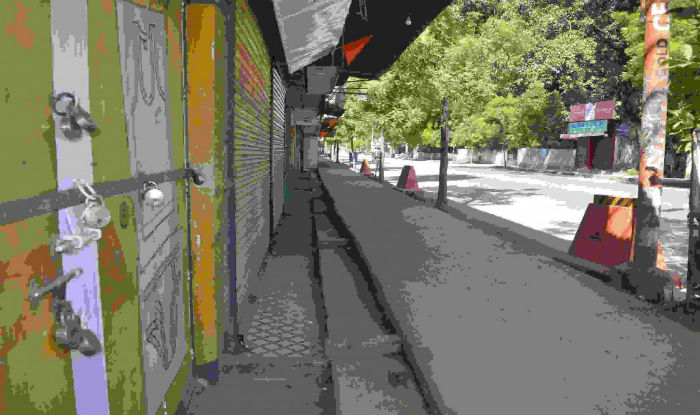 Aurangabad/Gaya: The 24-hour bandh called by the Maoists against oppression by security forces in the name of anti-Maoist operations crippled life at many places in Magadh division.

In Aurangabad, a group of suspected rebels torched a mobile tower at Barheta village under Deo police station of the district. Police sources said the incident occurred on Tuesday night during the 24-hour bandh call given by the Maoists. The rebels numbering around 20-25 reached the site and thrashed the guards. Before leaving the place, they set ablaze battery and other equipment of mobile tower and retreated chanting slogans.. “Lal salam zindabad, Maowad zindabad”.

SDPO (sadar) PN Sahu confirmed that the Maoists targeted the mobile tower to disturb communication services in the area. On the other hand, movement of inter-state buses were hit while many government undertakings and banks also remained closed in several blocks of the district. To prevent any untoward incident, there was high security deployment on highways. “Attendance was poor at government offices in Deo, Nabinagar, Kutumba, Goh, Rafiganj and Madanpur blocks,” said sources.

In Gaya, the bandh virtually crippled life in Dumaria, Imamganj, Banke Bzar, Raushanganj and some parts of Amas police station areas of the district. Life elsewhere in the district including Tekari sub-division area was normal.

Police sources said normalcy in Tekari is interesting as, earlier the Maoists regarded Konch-Tekari as ‘liberated’ zone meaning thereby that the writ of the rebels and not government machinery ran large in the area. On account of increased police mobility and Ranvir Sena aggression, the Maoists have made an unannounced retreat from the area.
According to reports reaching the district headquarters, besides shops and educational institutions banks too remained closed in Dumaria-Imamganj area. Several banks including SBI, Punjab National Bank (PNB) and Madhya Bihar Gramin Bank have got their branches in Maoist-hit Dumaria-Imamganj part of Sherghati sub-division of the district. However, some two wheelers were seen plying in the area. Though uninterrupted, traffic on NH-2, popularly known as Grand Trunk road was thin.
Earlier, on Tuesday, some Maoist posters had appeared in Imamganj accusing police forces of committing excesses on poor villagers who were allegedly being prevented from doing daily chores like cattle grazing and fire wood collection. Firewood remains the main kitchen fuel in the area.
Magadh range DIG Saurabh Kumar said except Deo police station area of Aurangabad district where mobile tower was damaged, no report of any untoward incident has been received from any part of the five districts of the Magadh police range.
The DIG also said patrolling has been intensified in the troubled-zone and City SP Awakash Kumar was camping in the Maoist-hit area. Railways have been alerted and have been advised to run pilot engines ahead of important trains and ensure escort for trains passing through the region. “Several important trains including Rajdhani Express pass through the area,” said the DIG.