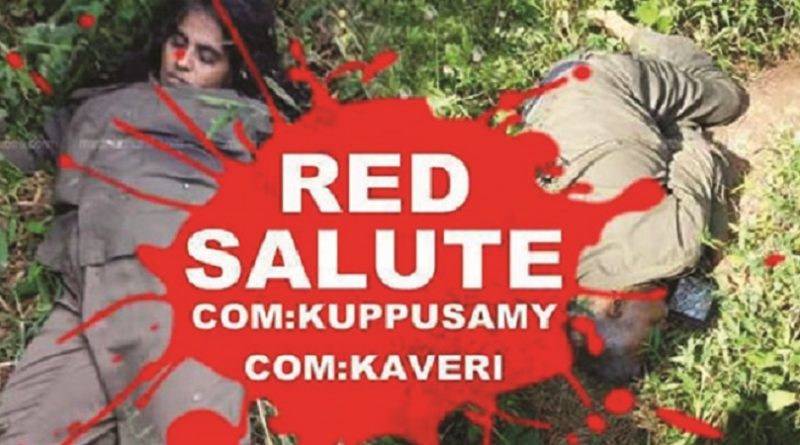 Demand re post mortem of the dead bodies of the deceased.
Demand judicial inquiry by a Supreme Court Sitting or Retired Judge
Homage to the Martyr Comrades.
Release Com. Soman and Adivasis if any in illegal police custody.
Release MN Ravuni (78), the veteran Revolutionary Mass Leader.
Appeal to the people and democratic organization and individuals to raise their voice in solidarity

Earlier to that the Kerala police involved in ʹThunderbolt Operationʹ meant to physically eradicate the Adivasis and Maoists in the Western Ghats for the vested interests of Multi-national companies and comprador companies in the country, cordoned the forest area for eighteen hours and did not allow movement of the people including the media persons into the forest. The incharge police officer for the Thunderbolt Operation says that the police did not allow the media persons only to caution them that there will be land mines planted by the Maoists surrounding their camp.

The fact is that these two comrades who were suffering with ill health and unarmed taking shelter in the Adivasi habitation were caught and killed in cold blood and the dead bodies were brought and thrown there. Later, the people in surrounding areas told the media persons that they have not heard any fire exchange sounds in preceding night. Even the police did not claim any injury on any police personal engaged in encounter. Where as in government medical college hospital, Kozikode 19 bullets were found in Devarajʹs body and 7 in Ajithaʹs body.

There are unconfirmed contradictory reports that Com. Soman, local CPI Maiost leader from Vynad is injured and is in police custody which the police are denying and saying that 11 CPI Maoist Guerillas have escaped and combing operations are being conducted in full swing.

The dead bodies of Kuppu Devraj and Ajitha are shifted to Government Medical College hospital, Kozikode (Calicut) and police claim that the post mortem is conducted and bodies will be preserved in the mortuary till Monday, 28th November, 2016. That means no NHRC guide lines and the recent Supreme Court Judgment regarding the encounter killings is followed. The photos of the dead bodies were not published in two National newspapers, except that of Devraj along with the press release of police. The families are not informed. The dead bodies were not shown to the mother, brother and sister of Devraj and Unlce of Ajitha who reached to Kozikode on the 25th November. Instead the police lathi charged and arrested twenty members of human rights organization (Janakeeya Manushyavakasha Prasthanam) and Porattam and threatened the relatives of deceased to leave the place. As the protesters number increased police were forced to release the JMP activists but shifted Com. M.N. Ravunuri, Veteran revolutionary mass leader of Porattam and Vice President of Committee for Release of Political Prisoners (CRPP) to another police station.

Com. M.N. Ravunuri is 78 and one of the senior members of undivided Communist party of India in Madras Province in 1950s and a public votary of Naxalbari path.

Ammini, the old aged mother of Kuppu Devarajan, Babu his brother and sisters who are waiting for the last four days in precincts GMC Hospital, Kozikode are demanding for repostmortem and CRPP JMP advocates also are supporting the demand and filled a petiotion in sessions court of Kozikode which will be heard on 29th of November, Tuesday. The court ordered the preservation of dead bodies in mortuary of GMC Hospital, Kozikode till the petition is disposed.

The Kerala State Human Rights Commission asked the state police chief to probe the matter and submit a report within two weeks.

SHRC member K. Mohan Kumar said that the mystery surrounding the incident should be unraveled. The order came on the basis of a complaint by an activist P.K. Raju who stated that the police has not been able to furnish a credible explanation on the killings even two days after the encounter.

The Crime Branch of State probe is ordered by the State Police Chief cannot clear the doubts of fake encounter since it involves the ʹOperation Thunderboltʹ and anti-maoist program of three states, i.e. Kerala, Karnataka and Tamilnadu and the Central government, to serve the vested interest of mining and private industries of MNCʹs and big bourgeois. We demand a judicial enquiry by the sitting or retired judge of Supreme Court in to this fake encounter.

The Chief Minister has also referred the case registered in connection with the ʹencounter killingʹ to the Crime Branch for further probe.
Mani, the minister for electricity in Kerala state govt. was suggesting that since Maoists are not communists as they indulge in mindless violence and extortion they deserve encounter killings and tried to guard himself, skipping that since magisterial inquiry is ordered he will not comment on ʹEncounterʹ.

It contrasts with the contemporary scenario in Chattisgarh where the State Secretary of CPI (M) is implicated in a murder case along with Professors Nandini Sunder and Archana Prasad from Delhi. There the allegation is Maoists killed an Adivasi ofcourse a police stooge. Here the CPI (M) Govt. is continuing the Thunderbolt, part of Greenhunt Operation, Mission 2016, the War on People, the erst while Congress and present Modiʹs Hinduthva government pogrom, with shoot at sight orders in Western Ghats. In dealing with Adivasis, Dalits and Muslims the policies of political parties in government are one and same is proved once again in Nilambur encounter.

Vijaya Kumar Ex CRPF Chief and security advisor on the Maoist movement to Govt. of India claimed in Chennai that it is great achievement to the state and big bolt to CPI Maoist. It seems his direction and Q branch of TN state role cannot be ruled out in this Thunderbolt operation. This will be the second direct involvement of Vijay Kumar after Kishanjiʹs encounter killing in Jangalmahal, Bengal.

This is perhaps the first major encounter in Kerala under CPI (M) government. Thatʹs why even the left front partner CPI is condemning it as fake encounter and demanding judicial enquiry.

The CPI State secretary Kanam Rajendran and state leaders are critical of police action and had made it clear that the CPI did not approve of Kerala being turned into a land where Maoists are hunted down.

The leader of opposition, home minister in Congress government Ramesh Chennithala came out against magisterial and Crime Branch enquiries terming them grossly inadequate to bring out the truth.

ʹThe Crime Branch inquiry would be particularly futile as the killing had been carried out by another wing of State Police. Only a fair inquiry would convince the people about the veracity or the police claims. Therefore, there must be an inquiry by a sitting or retired judge of the High Courtʹ Mr. Chennathala said.

Though this statement reflects the changing of colours and positions of parliamentary parties while in and out of power, it should go on record for as posterity of history demands.

Com. Kuppu Devraj is born in Krishnagiri of Tamilnadu but his revolutionary political activity is all through in Karnataka, till he took the responsibility of Western Ghats special guerilla zone. Devaraj is an engineering graduate with an intellectual of high caliber and is well versed in Tamil, Kannada, Malayalam, Telugu and English.

He was a performing artist and cultural activist and served as an executive member of All India League for Revolutionary Culture (AILRC) in the later year of 1980s. After one term he has gone under ground and became the Secretary of CPI (ML) PW, Karnataka and rose to the Central Committee, CPI Maoist after the merger of MCCI in 2004. He is senior to Martyrs Com. Saketh Rajan and junior to Cherukuri Raja Kumar in Karnataka party during last four decades.

Com. Ajitha daughter of Parandhaman, who served in Indian Railways as an officer, since retired, and deceased, joined the Revolutionary mass movement in 1980s organized the women liberation movement and also fought for democratic rights as an advocate in Chennai. Later she went under ground and has become part of Western Ghats Maoist revolutionary struggle.

Inspite of her failing eye sight and deteriouling health Ajitha withstood the ordeal of an under ground life in the midst of Adivasis and Dalits. Kuppu Devaraj and Ajitha were born into Dalit families and imbibed Revolutionary class consciousness to serve the exploited toiling broad masses of this country.

RDF pays homage to tow comrades Kuppa Devaraj and Ajitha and demands for repost mortem of dead bodies and judicial inquiry into the encounter and punish the officials involved in this operation. RDF appeals to the Democratics and people to stand in solidarity.