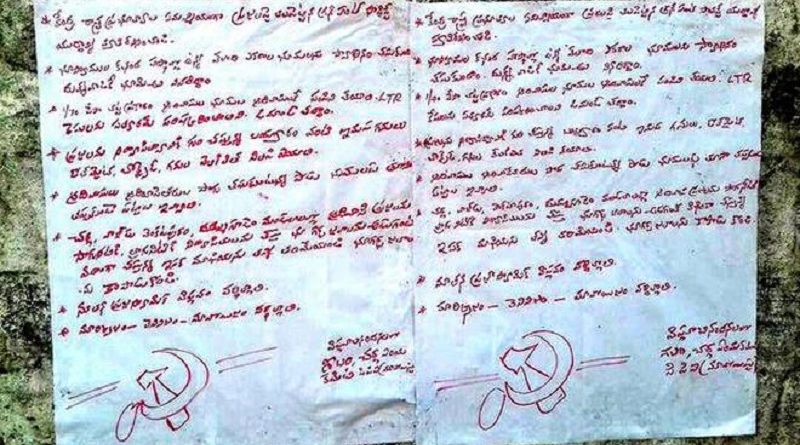 In the run up to the 50th anniversary of the ‘Naxalbari armed uprising’, Maoists have intensified a poster campaign against ‘Operation Green Hunt’ which they describe as a “fascist offensive” against people in Dandakaranya forest region.

Posters purportedly written by Maoists have surfaced at the busy Ambedkar Centre in Bhadrachalam, the tribal heartland of Telangana, in the small hours of Friday, sources said.

The incident caused a flutter in the temple town considered the gateway to the Dandakaranya forest belt mainly spread in the restive Bastar region of the adjoining Chhattisgarh State.

In the posters written in red ink, the Sabari-Charla Area Committee of the CPI (Maoist) urged people to fight against “sand and mining mafia” to protect the interests of Adivasis in the Agency areas.

The committee has demanded that the Land Transfer Regulation (1 of 70–LTR) Act should be implemented in tribal areas and pattas for ‘podu lands’ be distributed among tribal people.

The incident comes close on the heels of the release of a letter purportedly by the rebels in the name of Khammam and Bhadradri-Kothagudem district committee of the CPI (Maoist) urging people to observe 50th anniversary celebrations of the ‘Naxalbari movement’ from May 23 to 29 this year.