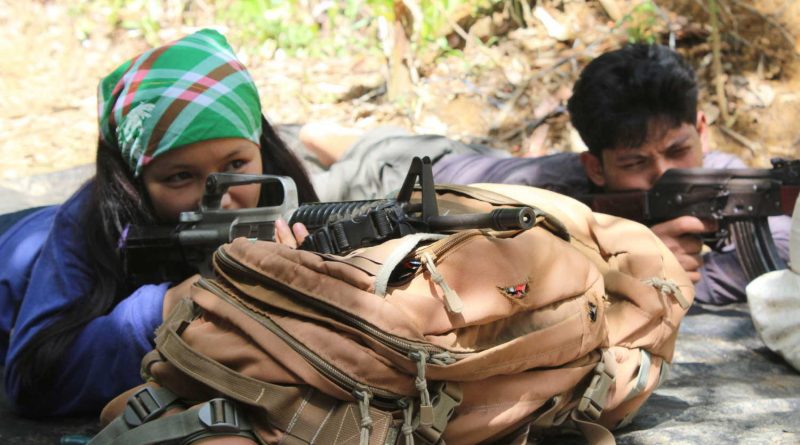 As the US-led Balikatan war exercises in the region close today, the National Democratic Front-Eastern Visayas said intensifying guerrilla offensives of the New People’s Army here are in defense of the people against the US and its militarist stooges in the Duterte government. “The signboard of ‘humanitarian assistance and disaster response’ in the Balikatan cannot hide the reality US and Philippine troops are mastering joint military operations,” said NDF-EV spokesperson Fr. Santiago “Ka Sanny” Salas. “This comes at a time when NDFP-GRP peace talks are set to resume on May 27 and there is a pronounced militarist position of the GRP to force a ceasefire agreement and cause the eventual surrender of the revolutionary forces. Either the peace talks or Duterte himself face the dangers of militarist intervention or regime change by the US and its stooges.

“This is related to the fascization of the Duterte government with the anomalous appointment of armed forces chief Gen. Eduardo Año as the next interior secretary, to complete the leading trio of ex-military, pro-US stooges in the civilian government including Defense Sec. Delfin Lorenzana and National Security Adviser Hermogenes Esperon. ”

Fr. Salas said the rising NPA offensives in the region – more than 14 from March – even before the Balikatan’s closing defend and promote national sovereignty and democracy, which are also basic principles in the peace talks. “The NPA is continuing the unfinished revolution of the Katipunan and fighting to ensure national liberation from more than a century of US colonialism and neocolonialism. Let us do away with the Balikatan and other unequal treaties tying us to US imperialist interests. Furthermore, we cannot build a strong and progressive country without the necessary social, economic and political reforms up for discussion and agreement in the NDFP-GRP peace talks.”

The NDF-EV spokesperson also urged the people to support the peace talks through mass struggles insisting their basic demands. “The people are not merely idle spectators to the NDFP-GRP peace talks. They must demand the release of all political prisoners as a matter of justice and as mandated by CARHRIHL, naturally leading to the aim of social justice in the upcoming discussion of the Comprehensive Agreement on Socio-Economic Reforms (CASER). They must also vigorously fight for their basic demands like land, jobs, free education and other social services promised by GRP President Rodrigo Duterte but remaining unfulfilled.

“We assert the matter of any ceasefire agreement should only be brought about in connection with the release of all political prisoners and the signing of the CASER. We furthermore urge the Filipino youth to fight for their future. We encourage them to do social investigation among the basic masses, support their democratic struggles, and join the NPA and help build the People’s Democratic Government in the countryside.”#