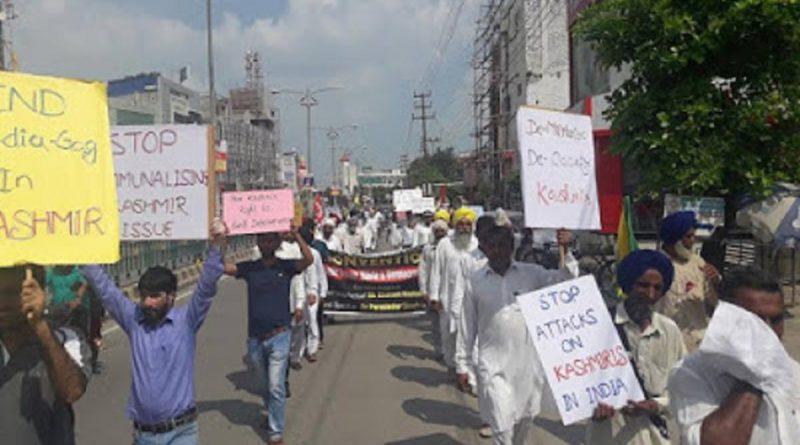 Salute association for democratic rights for staging protest in bathinda. And sowing seeds for anti-fascistic movement on Kashmir.

On August 21st there was a convention on Kashmir and afterwards a silent march in the city (Bathinda).Of great significance has been the resurrection of the Association for Democratic Rights,a leading civil liberties organization in Punjab.

This group played a major role in earlier exposing the false Naxalite encounters of the 1970’s and the fascistic Khalistani and state repression in the 1980’s and 90’s.

It defied all odds by thwarting the tentacles of the administration and holding the convention yesterday, creating light from the clutches of darkness.

Heroically sections from all rungs of society thronged into the convention hall, symbolic of the defiance against fascism.

Although the police tried to obstruct it and restrict propaganada they could not overpower the strong democratic forces.

All democrats world over should salute the A.F.D.R.for this. 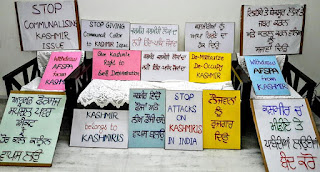 Heartening to witness over 1000 people comprising peasantry, workers, youth and students which is a tribute to the revolutionary democratic forces and movement of Punjab.

Many things went against our program. First, no one was ready to print our invitation cards and no one did.

Then, there was no media coverage.

Careful enough, we gave only basic information in our press release but still no newspaper covered us. (Hope they will cover our event in tomorrow papers).

Also, there were some conflicting events which really affected participation in convention. Lastly, our main speaker, Gautam Navlakha, could not come as he fell ill.

But, in the end our program proved to be successful. The participation was more than our expectations, audience felt involved and they participated in the march, that was declared only on the last moments during convention.

Our speakers, particularly Dr Parminder spoke really very well, quite boldly and clearly.
It was a very descriptive, informative and convincing professor type speech, as usual with him, but, there was an agitational tone, expressively deep anguish also that only reflected the sentiments of audience.

I think what made our program successful was the determination of our audience. We arranged the event, even could not meticulously convey messages but people came on their own.

What I sense from the participation, democratic organizations can arrange more such programs. There is a space, there is a mood and we can assert more and we should. Convention was organized under banner of Association For democratic rights, Punjab, Bathinda unit, with active support of many farmers, agri-laborers’, students’ bodies, trade Unions and other mass organisation .

Bathinda, August 21 The Democratic Rights Front Punjab today organised a convention in the city The Front also took out a march in the city demanding the removal of the Armed Forces Special Powers Acts (AFSPA) and other draconian laws in Kashmir.

Members of the Front are also demanded to stop violence against the locals. The Front also presented its report on the Kashmir violence.

Addressing the convention, Dr Parminder said Kashmir was facing the most non-democratic and inhumane conditions. The right to live was being taken away from the people of Kashmir.
After the convention, a silent march was carried out in which a large number of people, including women, participated. 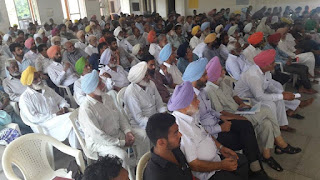 The convention was dedicated to Satya Goel who was a member of the Democratic Front and had recently passed away in Bathinda after prolonged illness.

The Front also passed resolutions demanding the rights of the Kashmiris people should be reinstated and removal of media restrictions.

The Front also criticized the decision of the police in which the police had registered a case of sedition against Amnesty International.

The gathering in the convention also paid their tributes to famous writer Gurdial Singh and Mahasweta Devi.