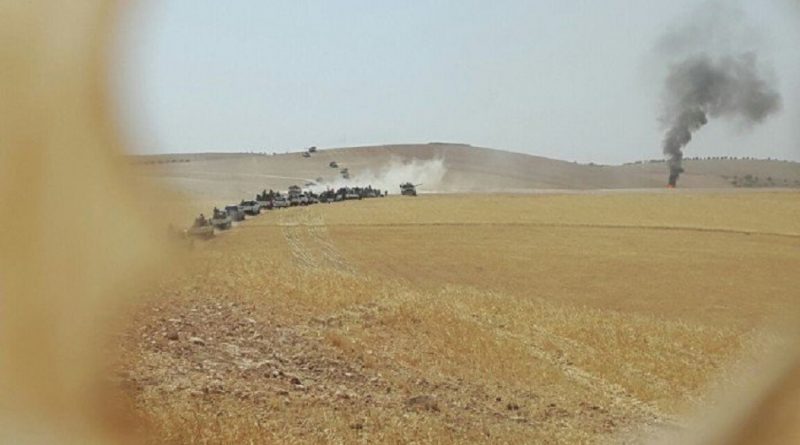 After the liberation of Manbij, Turkey once again took action. Recep Tayyip Erdoğan and his team began to implement new schemes against the people in North Syria that are in alliance with Rojava and the Kurdish people. With the mediation of Iran, Syria is now included in these schemes. Of course, the pro-KDP gang group ENKS is used as a pawn in this new scheme.

Once again, Kurdish collaborators were given important roles in the new scheme. The leading collaborator group KDP-affiliated ENKS and its leader İbrahim Biro were used to create a provocation. Despite the many court cases against him, Biro entered Rojava after Qamishlo massacre. The families of the civilians that were massacred during the attacks on Aleppo’s Ashrafiyah neighborhood in 2012 had sued Biro, who was also sued later for his relations with Al-Nusra member Usama Hilal; a participant of the attacks on Serekani. Most importantly, an arrest warrant was recently issued for Biro because of his participation in the Urfa meeting that was held in enmity to Rojava. Despite all of these developments, Biro entered Rojava secretly and many view this entrance as a provocation. Another reason for Biro’s entrance to Rojava is that the KDP has long been trying to get rid of him. Biro and other ENKS members had become a problem for South Kurdistan, and N. Barzani had tried to expel them from South many times. However, Masoud Barzani keeps them in the South for his political purposes.

Asayish forces had arrested Biro to extradite him and prevent him from implementing hostile politics in Rojava. Biro was soon extradited and Barzani, who had prevented PYD Co-Presidents Saleh Moslem and Asya Abdullah from crossing into the south via Semelka border gate in 2013 and 2016, respectively, greeted Biro in the city of Selahattin and accused of the Rojava administration of not being democratic. Two days later, Biro visited the Turkish Embassy in Hewler and requested help in his fight against the PYD and Rojava. All of these developments expose the roles Biro and Barzani were given in the plan against Rojava.

The new plan led by Turkey is the search for a new balance of powers. In fact, it is rather the new attempt of actors that insist on the status quo to come together. The old status quo had begun with World War 1 and ended with World War 2. Kurds and other peoples, faith groups, genders, and cultures were ignored in this period. Turkey and Iran insist on the old status quo. With Iran’s mediation, these two actors try to include Syria in their attempt to continue their colonial presence in Kurdistan.

Insisting on the status quo, Turkey and Iran saw this and reactivated the Syrian Ba’athist regime, which attacked the Kurds and their allies in Hesekê. With this attack, it tried to delay the liberation of Jarablus, Bab and Shehba.

As usual, Turkey played the main role in this process and simultaneously prepared the grounds for this plan with its international relations and took action to occupy Jarablus, Rai, Bab and Shehba.

They have mobilized the “North Army”, whose main body consists of Jabhat Al Nusra, Ahrar Sham, Nuretting Zengi groups and Sultan Murad, Sultan Abdulhamid, Asifet Şimal groups in complete alliance to them. They put the man called Osman Salih, who is from Turkmen Mountain and had been there before, to lead these groups. Osman Salih set up a headquarters in Havar Kilis village in Kilis. The groups mentioned above have continually sent groups from their forces in Syria to prepare to attack Jarablus. Osman Salih received the coming fighters and equipped these fighters with the weapons, ammunition, uniforms and boots given to him by the Turkish army. These groups didn’t have much in numbers. A reliable source who wishes to remain anonymous has given the information that these groups recruit fighters from AFAD controlled camps and said:

“These groups approached AFAD-controlled refugee camps to recruit more members. They recruited hundreds of boys aged 14 to 16 from these camps to attack Jarablus. They paid 300 dollars cash per person. The most obvious example is the Asifet Şimal group. This group under Ebu Ali Sico’s control doesn’t have a single fighter. But now, hundreds of their fighters are waiting in Karkamış to cross over to Jarablus. He recruited all of those fighters from these camps.”

WAITING IN KARKAMIŞ FOR A WEEK

The gathered gangs had been waiting in Havar Kilis and Karkamış for a week. Many of them probably don’t know why they are attacking. Many of these people who were recruited when Turkey demanded will not return from this attack. This doesn’t matter all that much to Turkey. What’s important is that peoples of Northern Syria, especially the Kurds, don’t achieve their goals.

THERE ARE THREE KURDS

There are three Kurdish boys among these recruited youth. Their village Qubbes is under ISIS occupation, these children had crossed over to Kilis and had been staying in the AFAD-controlled camp. They are reported among those gathered from camps for Jarablus.

WHAT WILL THE INTERNATIONAL POWERS SAY?

Turkey, Iran and Syria taking Jarablus from ISIS with pro-Turkish groups in agreement is actually an open attempt at invasion by Turkey. The stance of international powers is not entirely clear on this matter just yet. Approximately five months ago, the US allowed Turkey to open a corridor on that front, but Turkey couldn’t achieve a result despite employing all their gangs. This time the attempt goes far beyond opening a corridor. It is a kind of invasion. The US, Russia and Western countries haven’t revealed their stance on this issue very clearly yet. But it seems there isn’t an agreement in place. If there had been an agreement, 5 thousand people wouldn’t have been on hold in Karkamış and Havar Kilis for a week. But it’s not clear what their stance will be, or will it change or not. This will get clearer in the coming days.