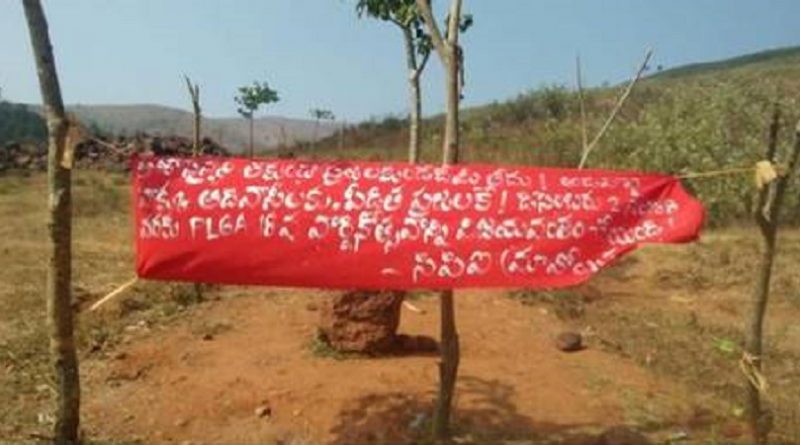 The first day of the PLGA (People’s Liberation Guerilla Army) Week on Sunday passed off peacefully in the Visakhapatnam Agency with no untoward incident being reported.

The PLGA week is observed by the banned CPI (Maoist) from December 2 to 8 to condemn the killing of three central committee members of the outfit — Seelam Naresh, Nalla Adi Reddy and Yerramreddy Santosh Reddy — by the security forces in Koyyuru forest in Karimnagar district of Telangana, on December 2, 1999.

According to sources, movement of a Maoist contingent was noticed in the Gumma region in the cut-off area of AOB. It reportedly held a meeting with the villagers.

Before commencement of the week, Maoist posters surfaced in some interior parts of the AOB on Friday. Posters were found pasted in Nurmati, Madigaruvu and Bongaram in G. Madugula mandal on Sunday also.

This apart, the Maoists triggered two landmine blasts simultaneously near Vandrangula village in Nurmati panchayat of G. Madugula mandal in Visakhapatnam Agency on Wednesday in which a constable of the CAP (combined action party) of Andhra Pradesh police and a local tribal received minor injuries. The Maoists also detonated an IED (improvised explosive device) near Injari in Pedabayalu mandal on Saturday.

Meanwhile, to prevent any untoward incident during the week, the security agencies deployed more of its forces in all nine affected mandals.

According to the police, intelligence inputs suggest that Maoists are planning to blast cell phone towers.

“Cell towers have bettered the communication network in the Agency areas. They (Maoist) should understand that cell network today plays an important role in the areas of education and medical emergencies. If the communication network is down, the tribal people will be badly affected and the Maoists should realise it before taking such steps,” said Attada Babujee, Superintendent of Police, Visakhapatnam.

No impact on tourist flow

With regard to tourist flow, the PLGA Week seems to have no impact. There is no slowdown in the tourist footfall in the places like Araku, Bora Caves and Lambasingi.

“The tourist rush is heavy and we have increased the presence of security forces at all tourist spots,” said Mr. Babujee.