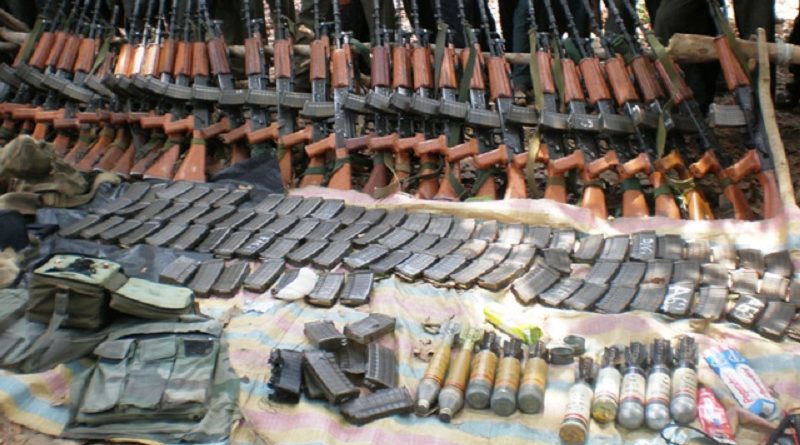 A week after the Sukma encounter, which killed 12 personnel of Central Reserve Police Force (CRPF), the maoist party released a press statement carrying an image of assembled modern weapons they Possessed from the dead CRPF personnel.

The picture along with the statement released by the South Bastar Divisional Committee of CPI (Maoist) showed four AK-47 assault rifles, six INSAS rifles, One Light Machine Gun (LMG), one Under Barrel Grenade Launcher (UBGL) two wireless sets and over 1130 bullet cartridges taken away by the rebels.

The Maoists praised their cadres of Peopleʹs liberation Guerrilla Army (PLGA) — the armed wing of the banned organisation– that ʹcarried outʹ the attack on a road opening party, killing twelve CRPF jawans in Sukma on March 11.

This is the third major encounter this month in the restive Bastar zone. On Thursday, two members of CPI (Maoist) were killed in Narayanpur and on March 11 the armed maoists ambushed a road opening party (ROP) killing twelve CRPF jawans in Sukma.

The maoists have presence in at least 16 of the 27 districts of the State but are most active in south Chhattisgarhʹs Bastar region.