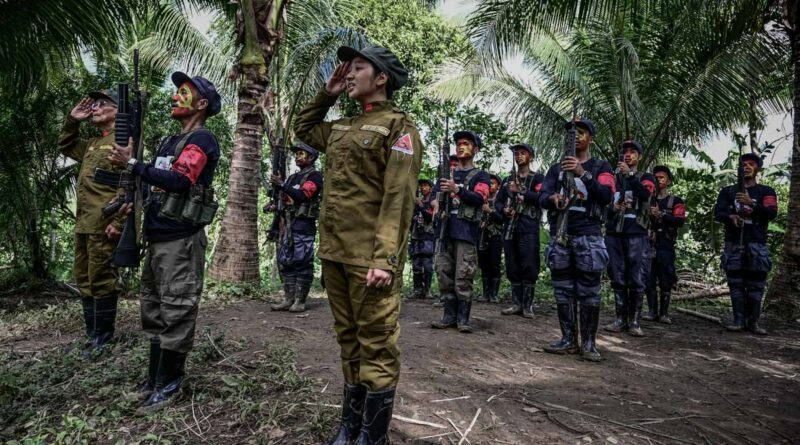 Over the course of more than 500 years, the Filipino people have risen up in arms in militant resistance to defend and fight for the nation’s freedom against foreign oppressors. Thousands of battles have been fought across the country between the nation’s patriots, on the one hand, and the armies of foreign subjugation, on the other hand. But even while there were Bonifacios, Sakays, Dagohoys and other patriots who sacrificed for the nation and fought more powerful enemies, there too were Aguinaldos, Quezons, Marcoses and other traitors who betrayed the country’s freedom, who collaborated with the imperial masters to serve their personal interests and the interests of their class.

Today we mark the 123rd anniversary of the false declaration of independence when the traitor Aguinaldo declared Philippine freedom under the sovereign power of the United States, right after the Filipino people led by the Katipunan won their freedom from Spanish colonialism through armed resistance. This would usher in a period of a brutal American war of “pacification” to suppress the Filipino people’s patriotic resistance where more than a million Filipinos died during the period.

On July 4, we will mark 75 years of semicolonialism, when the imperialist United States granted nominal independence to the Philippines and established the client-state under its military protection. For three-quarters of a century now, the Philippines has remained under US neocolonial rule in collaboration with the big bourgeoisie comprador and big landlord class.

For the past seven decades, the country’s human and natural wealth and resources have been relentlessly plundered and exploited by US-led multinational corporations who are driven by their insatiable appetite for superprofits. The country has been condemned to a backward state of semifeudalism. It remains largely agricultural and an exporter of commercial fruit, raw materials, mineral ores and cheap labor. It has been prevented from developing its industrial base and capacity to manufacture basic commodities to stand on its own two feet forcing it to import more and more of its necessities.

As the global imperialist crisis worsen and rivalries between the big imperialist giants intensify, the Philippines is being subjected to even worse oppression as foreign multinational corporations, mainly from the US, China and Japan, race to extract the biggest profits from the country’s resources under the neoliberal policy regime. Imperialist banks and financial managers continue to feed the country’s dependence on debt and dictate policies to allow foreign capitalists to earn more profits.

Under the Duterte regime, the country’s lack of genuine freedom has worsened with his outright subservience to both the US and Chinese imperialists, which he falsely touts as “an independent foreign policy.” On the one hand, he has allowed China to establish military facilities and encroach into more and more areas within the country’s exclusive economic zone and siphon off our fish and marine resources, in exchange for kickbacks and bribes on loans and grants, and a share in the drug smuggling operations. On the other hand, he continues to allow the US military to use the country as a military base with American military facilities inside Philippine military camps and weapons stockpiled in strategic areas in the country, in exchange for bigger military aid for the purchase of bombs, artillery and bullets to prop up his tyranny.

We are witness to heightening intervention between the imperialist rivals. As early as 2018, China has declared it will not allow Duterte to be replaced. On the other hand, the US continues to assert its control and mobilization of the AFP in the West Philippine Sea. The upcoming 2022 elections will likely see increased political interference by both imperialist powers to ensure their strategic interests in the country.

As the Philippines becomes subjected to even worse forms of national oppression, the necessity of struggling for national liberation becomes even more necessary and urgent. The struggle for national liberation is inextricably linked with the political struggle to overthrow the puppet client-state which perpetuates the country’s semicolonial and semifeudal social system. Attaining national freedom is the basic condition in order to effect democratic changes.