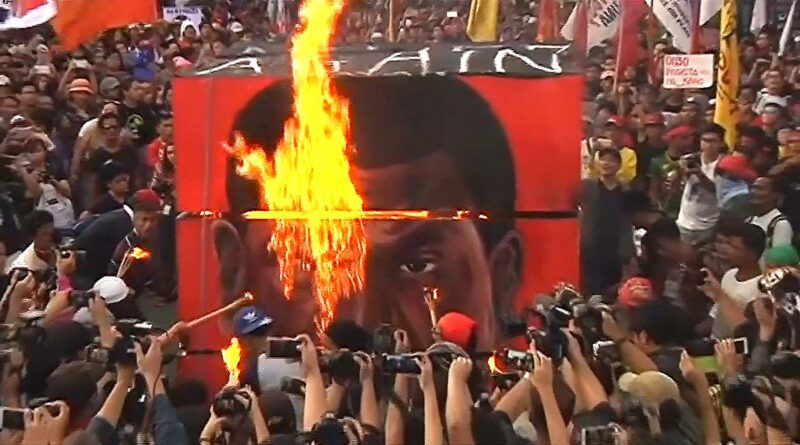 It is possible to fight and win the struggle to overthrow the fascist Duterte regime. On Duterte’s tyrannical State of the Nation Address (SONA) Day, the entire town is ready to crush the rotten, corrupt, useless and terrorist regime. The entire people will continue to act until Duterte is completely overthrown and his dictatorial rule ends.

The Filipino people have no hope in the traitorous and criminal murderer Duterte. For five years he brought the town into extreme poverty. In its fifth SONA, the people call for his downfall based on the following:

1. His regime’s numerous human rights violations are a crime against humanity, including mass killings under its war against illegal drugs and the war against the struggling people under the guise of allegedly suppressing communism and terrorism.

As many as 30,000 were killed by the regime in its campaign against illegal drugs and even used it to bring down the Duterte family’s opponents and rivals in the illegal drug business. Most of the victims are usually citizens suspected of being addicted or drugged. It has exacerbated the culture of impunity because it does not hold the PNP and AFP accountable for their respective killings and abuses of power.

The regime’s anti-communist war resulted in various human rights violations in which 63,774 different cases of violations were recorded from January 2020 to December 3, 2020 alone. In the midst of the COVID-19 pandemic, the regime launched “counter-insurgency” military operations covering 1,075 barangays of 389 towns or cities in 64 provinces. The people were exposed to state terrorism and AFP-PNP violence in the form of killings, torture, intimidation, intimidation and indiscriminate bombing and shelling of their communities.

Southern Tagalog (SW) is not safe, especially since the region is considered one of the state’s killing hotspots. On March 7, Bloody Sunday took place that claimed the lives of nine activists. Killings and illegal arrests continue in the region to this day. In the first half of 2021, 13 cases of extrajudicial killings were recorded, 48 cases of illegal arrest, 3 cases of abduction, 2 cases of bombing in communities and 4 cases of harassment and forced eviction of community.

2. Duterte is a traitor and sold the country to US imperialism and China.

Duterte is the main seller of Philippine national sovereignty where he voluntarily surrendered the West Philippine Sea (WPS) and the Philippine sovereign right here to China. He is deaf to the grievances of fishermen who are repeatedly attacked, oppressed and deprived by China of the last fish in such oceans. He renounced the country’s legitimate fight to assert the right to solely avail the WPS resource when he dismissed the Philippine arbitration won in the Permanent Court of Arbitration under the United Nations Convention on the Laws of the Sea.

Meanwhile, the Visiting Forces Agreement was further ratified and became the basis for other military agreements with the US. Duterte continues to receive military aid from the US, most recently P183 million worth of firearms on June 22. According to the US compass, Duterte has implemented anti-people wars and laws such as the JCP Security and Anti-Terror Law. (ATL) to obtain extra munitions.

Duterte is puppetizing two imperialist masters in exchange for vaccines, funds, loans and support for his dictatorial rule.

3. Duterte criminally neglected the people in the midst of the COVID-19 pandemic.

The regime is sloppy, negligent and useless in dealing with the COVID-19 pandemic that has resulted in the illness of more than 1.5 million Filipinos who have already killed more than 27,000 Filipinos. From the beginning, he did not declare a travel ban on China, the source of the virus, and allowed the disease to spread when Chinese tourists were allowed to enter the country. Instead of comprehensive and scientific solutions to prevent COVID-19, he imposed a militarist lockdown that was essentially the imposition of de facto martial law on the country. He gave retired generals the management to fight COVID-19 which resulted in a further escalation of cases of human rights violations and arbitrary arrests of citizens in the name of health protocol violations. No mass testing has been implemented,

The regime did not provide adequate assistance to the people affected by the pandemic. Young people have been suspended from education and no action has been taken on widespread unemployment in the country. They even managed to steal the funds set aside for responding to the pandemic.

4. Duterte’s excessive embezzlement of the people’s coffers for the enrichment of his family and to feed his cronies and butcher generals

Funds allocated to NTF-ELCAC will also be anomalous, such as the Barangay Development Program where the AFP immediately took P19 billion in funds after the Filipino people called for the removal of NTF-ELCAC funds. The communities on its list did not benefit, but were further subjected to militarization. It has been exposed that it will be used by the Duterte clique for vote manipulation and fraud in the 2022 elections.

Since taking office as president, the Dutertes’ wealth is estimated to have increased. To prevent its exposure, the regime insisted on not releasing the Duterte family’s Statements of Assets, Liabilities and Network (SALN). Generals also indulge in key government positions and cronies in Build, Build, Build projects.

In 2020 amid the pandemic, gross domestic product (GDP) fell by 16.7% in what has been called the steepest economic downturn in four decades. The Philippine debt has swelled to P11.1 trillion by the end of May 2021. At the same time, the rapid rise in commodity prices caused by the enacted TRAIN Law. Prices of petroleum products, rice, meat, vegetables and more have skyrocketed. The Filipino people, numbering 12 million, have lost their jobs even more.

Along with the deteriorating condition of the people, Duterte eased the entry of foreign mining and plantation corporations that are seizing the land of farmers and indigenous people in the countryside. Workers remain contractual – in SW alone, there were an estimated 30,000 contract workers and no job security. The drivers were unemployed because the jeepney phaseout was staged amid a militarist lockdown. There is no livelihood waiting for Overseas Filipino Workers (OFW) who have been forced to return to the country.

The Filipino people were explicitly deprived of genuine socio-economic reforms when Duterte abandoned peace talks with the NDFP in 2017. Duterte arbitrarily stopped talks amid discussions between the two sides on the land reform and national industrialization program under Comprehensive Agreement on Socio-Economic Reforms (CASER). The regime vehemently denies that the root of the armed conflict in the country is due to the widespread hardship imposed by the semicolonial and semifeudal system in the Philippines.

6. He imposed his fascist dictatorship on the people and plotted to rule beyond his term.

Duterte enacted the ATL and turned it into a weapon to persecute and attack activists, progressives, critics, opposition and patriotic Filipinos in the name of allegedly fighting terrorism. He staged the pandemic to impose undeclared Martial Law in the form of militarist lockdown. With this, he sowed terror and terror to suppress any legitimate struggle of the people.

With the end of his term and the approaching 2022 elections, the Duterte clique is plotting to stay in power. Duterte equipped the Congress to plan to draft a federalist Constitution at the same time as the imposition of de facto Martial Law in the country. Duterte’s blatant statement to run as vice president in the 2022 elections and to choose the next president to evade responsibility and prosecution for his crimes in the country further intensifies the people’s anger.

The people can no longer afford to extend the term of the useless, oppressive, and fascist regime. There is no room for the next term of Duterte or his faction. The people must unite to oppose and fight the scheme to extend his rule. At the same time, the people’s strength must be concentrated to prosecute and hold Duterte accountable for his crimes against the people.

The Filipino people can count on the revolutionary movement as its only foundation to fight the US-Duterte regime. They are ahead of the CPP-NPA-NDFP to direct the national democratic revolution until the fascist dictatorship of Duterte is completely overthrown.