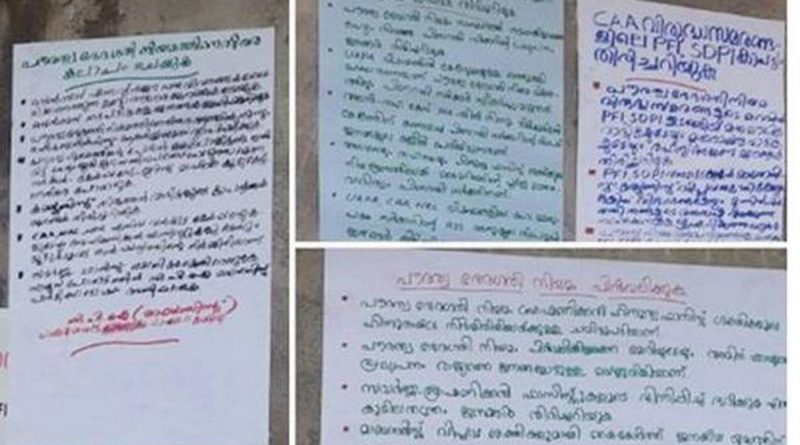 Handwritten posters allegedly put up by Maoists, calling for a ‘revolt’ against the Citizenship (Amendment) Act (CAA) and boycott of the Census, surfaced at Ambayathode town, near Kottiyoor, here on Wednesday.

The posters, in the name of the Western Ghats special zone committee of the CPI (Maoist), appeared two days after a four-member Maoist team reportedly visited the Aralam farm and collected rice and other items from houses there.

Both Prime Minister Narendra Modi and Chief Minister Pinarayi Vijayan are having the same stance with regard to the CAA, the poster said adding both the Centre and State are trying to implement the CAA.

The posters cautioned against the ‘communal agenda’ of ‘fundamentalist organizations’ such as the Popular Front of India (PFI) and Social Democratic Party of India (SDPI) against the backdrop of anti-CAA protests. “Resist the attempts of the PFI and SDPI to implement their fundamentalist communal agenda by making use of the communist-Maoist and Dalit organizations,” it read in Malayalam.

The poster also targeted the Chief Minister over his stand on Unlawful Activities (Prevention) Act cases and alleged that he was hand-in-glove with the Centre. It further claimed that the letter sent by Mr. Vijayan to the Centre seeking to transfer the case against two students who were charged under the UAPA for their suspected Maoist links back to the Kerala Police was an attempt to hoodwink the people.

The Kelakam police have registered a case and the Special Branch of the Kerala Police has started an investigation into the matter. ‘‘The posters were found in the morning and we were informed by the locals. It’s mainly against the CAA,’’ the police said.

The Maoists had visited the place and pasted posters two months ago.