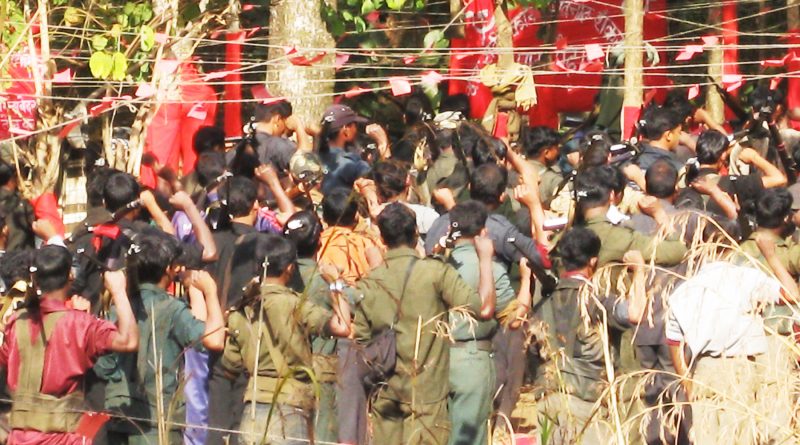 Intelligence inputs warned the Central Reserve Police Force (CRPF) and state police forces earlier this month at a time when the security forces as well as the entire law and order machinery are busy in enforcing the lockdown measures to break the coronavirus chain.

According to the inputs, Maoist groups are “continuously conducting meetings in the core areas in Chhattisgarh”s Sukma district and in Darbha division in Jagdalpur district of the state and part of Dantewada district there under the supervision of top Maoist leaders.

“The Maoists are organising villagers for confronting the government on the issue of fixing minimum price for plucking up of tendu leaves and compensation for death or injury of villagers involved in plucking of the leaves,” the inputs accessed by IANS said.

The Maoist groups laid traps for Security Forces (SFs) during the first phase of the 21-day lockdown between March 24 midnight and April 24 midnight at Kikler and in between Gangaloor and Cherpal under Gangaloor police station in Chhattisgarh”s Bijapur district.

The traps were specifically laid in the second week of April for almost 3-4 days, the intelligence report said.

Taking advantage of lockdown period and less number of operations in the Area of Responsibility (AOR) of SFs, the inputs said the Maoists conducted intensive recce in the Rajpenta area in Chhattisgarh”s Dantewada district.

“It is further learnt that the Maoists planned Improvised Explosive Devices (IEDs) at Rajpenta and Chimilipenta areas.”

In the second week of this month, a group of Maoists of “Kerlapal Area Committee of Maoists” blasted IED around 10 p.m. and damaged a culvert near Renga Para, ahead of Gorgunda, on Dornapal-Jagargunda road under Polampalli police station in Sukma district.

After a thorough investigation, the security forces found that the IEDs were planted by Maoists near Pushpal camp of 195 Battalion of CRPF in Maad area in Jagdalpur district.

A few days back the Maoists of Malangir Area Committee had cut the Aranpur-Potli road at ten places and rendered it unsuitable for plying of vehicles, the report said. It mentioned that they are looking for an opportunity to inflict damage to the personnel of “Potali camp of CAF and Kondasawli camp of 231 Battalion of ACRPF in Dantewada district”.

The Maoist activities were observed in Chhattisgarh when Malkangiri-Koraput-Visakha Border (MKVB) division”s committee secretary Kailasam and other Maoist groups had earlier this month released a hand-written statement in Telugu and other languages regarding ceasefire amid COVID-19 pandemic.

The Communist Party of India-Maoist (CPI-Maoist) has announced a unilateral ceasefire and said they would not attack security forces because of the spread of coronavirus outbreak across the country.

“Our party, People”s Liberation Guerrilla Army (an armed wing of the CPI-Maoist), and various frontal organisations of the party have decided against carrying out any kind of attack on the security forces during this period,” the statement said.

Kailasam, however, warned that the party would be compelled to retaliate, if security forces resort to any kind of action. “We demand that the government responds to our statement within five days,” Kailsam has said in the letter.