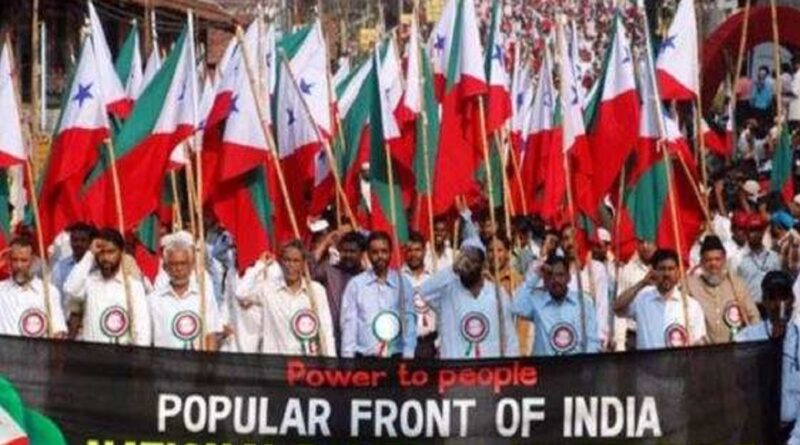 Hyderabad District, October 2, 2022: The Communist Party of India (Maoist) has condemned the ban on the Popular Front of India (PFI) and eight organizations affiliated to it and described the “fascist” BJP government’s decision to put a pan-India ban on PFI for five years as “draconian and anti-democratic”.

The CPI (Maoist) said, in a release, that the decision was an integral part of the Hindutva agenda and the Brahmanical Hindutva BJP had once against criminalized the Muslim community through the ban. The National Investigation Agency (NIA) conducted searches in 11 States in a gap of four days and arrested more than 100 persons besides detaining over 250 belonging to PFI. These raids caused a lot of agony and discomfort to the arrested persons and their families.

The logic behind the ban involved three reasons, one among them being PFI and its affiliated organizations being engaged in “violent terrorist activities” and the other being the Front was establishing a reign of terror and disrupting peace. “The third is that the PFI is a threat to national security,” the CPI (Maoist) said in a statement, adding that these logics were only to outrightly curtail and decimate the forces opposing Brahmanical Hindutva fascism.

There was no denying the fact that all parliamentary political parties had treated Muslims as only a vote bank community. The political, social and economic development of Muslims hardly got a reflection in the political conscience of parties. “Fascist vigilante forces like Gau Rakshaks, anti-Romeo squad and hate-speech mongers are getting legitimacy and support of the government,” the statement said.

“While Gau Rakshaks lynched Muslims in broad daylight, properties of Muslims are being considered illegal and confiscated or razed through bulldozers. The BJP, since it came to power, is consciously instigating Islamic phobia and there is extreme ghettoization of the community,” the CPI (Maoist) statement said.

It also said that the ban was a design by the BJP for political and electoral gains in the upcoming elections to various States as well as 2024 general elections. The BJP, through the ban, was intending to communalize elections and wanted to centralize Hindu votes in the name of fighting the so called “Islamic terror”.

The government had not just imposed a ban on PFI, but democratic organizations and even social media accounts and YouTube channels that were critical of it. Asserting that the CPI (Maoist) stood for freedom of speech and expression for marginalized communities, the party appealed to all democratic and mass organizations to oppose the ban culture initiated by the BJP government.