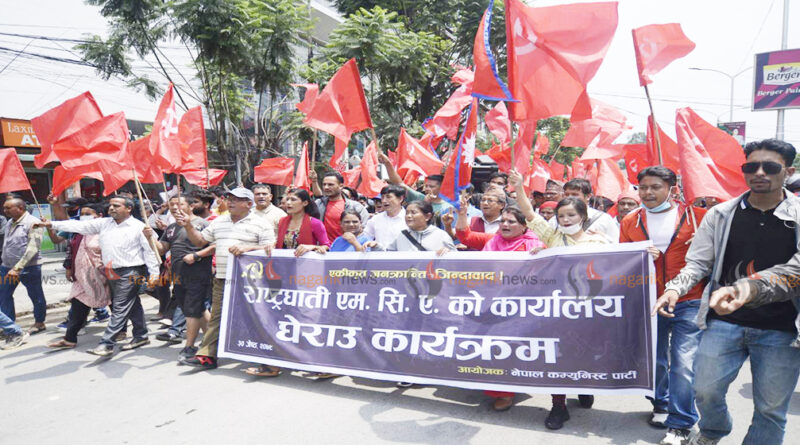 Kathmandu, June 13, 2022: The Communist Party of Nepal, led by Netra Bikram Chand, has cordoned off the central office of the US-funded Millennium Challenge Corporation (MCC) in Kathmandu.

The party’s cadres staged a protest on Monday, holding placards and chanting slogans with remarks outside the MCC office in Durbar Marg. They accused the US of increasing its interference in the country under MCC.

Central Chairman Prakash Shahi of All Nepal Revolutionary Party said, “The MCC project is not in Nepal’s favor. It is a project that should be owned and operated by the Nepali government, but the US is increasing its interference in the country by bringing their military into the country.”

Meanwhile, Chiranjeevi Dhakal, a central member of the Chand-led CPN, accused the US military and political figures of increasing their involvement in Nepal after the MCC was passed by parliament ‘against the will of the Nepali people.’

The assistance agreement received from the US government for the development of Nepal’s economic and physical infrastructure has been published in the Nepal Gazette. The House of Representatives approved the agreement on grant assistance from the United States for the construction of a total of 313.9 km long 400 kV transmission line and about 100 km long road project on February 27.